“The revelation did not sit well with his critics on social media.” 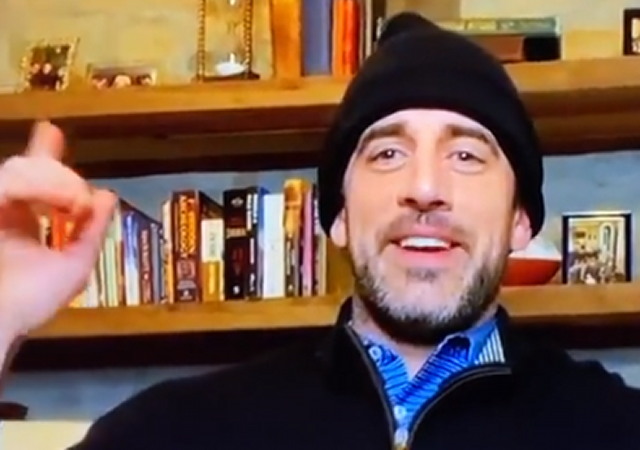 Green Bay Packers quarterback Aaron Rodgers appeared on ESPN this week and pointed to a copy of Ayn Rand’s ‘Atlas Shrugged’ on his bookshelf, which is apparently a thoughtcrime now.

Liberals lost their minds, because he owns a copy of a book they don’t like.

NFL quarterback Aaron Rodgers caused an uproar on social media following his appearance on the ManningCast show. He was speaking to co-hosts Peyton and Eli Manning on the ESPN2 telecast of ‘Monday Night Football’.

The Green Bay Packers star athlete did not address the controversy following his false claims about his Covid-19 vaccination status, for which he was fined $14,650 by the NFL for violating the league’s protocols. Rodgers, however, still managed to raise eyebrows about his reading choices when he explained the contents of the bookshelf behind him.

Peyton and Eli Manning mostly discussed football with Rodgers. At one point during the telecast, they were curious about what the 38-year-old athlete was currently reading. “What are you reading right now?” one of the hosts asked. “Yeah, a lot of French poetry, and I’ve got ‘Atlas Shrugged’ by Ayn Rand over here,” Rodgers responded, pointing to the books in the backdrop. The revelation did not sit well with his critics on social media.

“Aaron Rodgers brags he has Ayn Rand’s “Atlas Shrugged” on his bookshelf. Explains everything,” Philadelphia Inquirer columnist Marcus Hayes tweeted. “What is Aaron Rodgers reading? “A lot of French poetry. Some ‘Atlas Shrugged’ … I rearranged it to make it look like it was filled,” CBS Sports writer Will Brinson added.

This was the moment:

Aaron Rodgers, from a justified hater of awful Scott Walker to … having “Atlas, Shrugged” from nutty Ayn Rand.

This is a columnist for a major paper:

Aaron Rodgers brags he has Ayn Rand’s “Atlas Shrugged” on his bookshelf.

Brandon Contes of Mediaite is reporting that the whole thing was a troll:

Less than 24 hours after receiving a rash of criticism on Twitter for owning a book that many deem to be controversial, Rodgers made a surprising admission. He never read the book.

In addition to creating controversy on a seemingly weekly basis during his weekly interviews with Pat McAfee on SiriusXM, Rodgers also suggests a weekly book on the show. This week, Atlas Shrugged seemed like the obvious choice because he mentioned it on ESPN Monday night. Instead, Rodgers offered his surprising admission.

“I actually have never even read it,” Rodgers said on The Pat McAfee Show with a laugh.

Controversial book? It was published in 1957 and still sells millions of copies. This paragraph from Contes is literally insane:

Despite being a work of fiction, Atlas Shrugged has received criticism for promoting selfishness as a virtue. The odious ideology tends to attract young men in college who lack the worldview to care for others and has developed somewhat of a cult following over the years.

I’m not an Objectivist or even a huge fan of Ayn Rand’s books, but I do enjoy hearing her talk about politics. If you have never done so, I urge you to watch this clip from an interview she did with Mike Wallace in 1959. Some of the things she talks about are more relevant than ever.

I’ll leave you with this…

Personally I thought Aaron Rodgers is a much better replacement than Ken Jennings for Jeopardy.

“as my friend Zack used to say, it’s a “real douche-nozzle’s guide to the world.”
–Aaron Kirkland, Esquire

“In the 1990s, a survey by the Library of Congress named Atlas Shrugged as the most influential book in the US, after the Bible.”
–BBC News

I’m glad it triggers them.
Trigger them some more.
Trigger them four times a day.
Our goal should be complete breakdown and catalepsy.
Or better, a twilight existence equivalent to their Messiah’s, Joe Biden.

Well, to be fair, he would probably say the same thing about the Number One influential book too…

It’s what we would say if Das Kapital or Ibram Kendi’s vomit were to be ranked the first or second most influential book.

Except that neither would have earned it and atlas shrugged isn’t about any race other than the human race.

I often argue with Milhouse but he is completely right on this, I would have similar sentiments towards someone who had as their most influential author Ibram Kendi.

It’s not just the left triggered by Ayn Rand, many on the right are as well. Her Atheism doesn’t sit right with them.

That said, most of the people using the same themes to criticize Rand have never read a single book she’s written. They’re just repeating the same crap I’ve been hearing for the last 4 decades. If they’re particularly vicious, it’s because they did read her books and recognize themselves in her writings.

These morons are offended by shadows and clouds no doubt

At first I was locked out of the log in, weird

Yeah, I got a 403 Forbidden error when I clicked “Login to reply” next to a comment. The Login at the top of the page worked normally.

ARod is far from being an Independent, Libterian, or Rigyt
He’s a Woke as can be… of course, now the Left has come for him… maybe it will be a sentinel event, but he’s so narcissistic I have my doubts
And I’m a life long Packer fan that bleed green and gold. When the NFL sold out it’s fan base, I didnt look for 2.5 years, have not attended the games ( I use to travel to see them just recently I have “peeked”.
It’s sad, it was a big part of my life at one time

“I have never understood why it is “greed” to want to keep the money you have earned but not greed to want to take somebody else’s money.”

― Thomas Sowell, Barbarians inside the Gates and Other Controversial Essays

I miss him and and Andrew Brightbart.

I haven’t read the book, but. I have watched the movie in 3 installments. They would have been so much better if they hadn’t recast every time.

It took them 11 years to raise the money to produce the three segments. It doesn’t do justice to the book.

I agree. But you would not believe the shoestring those movies were done on. They were crowdfunded, for gossake. They had to raise the budget anew every time.

The movies were God awful, almost comical so poorly done
Probably none of the actors wanted to do another one

Guys, this is someone who lied about his vaccine status to not take the heat,
unlike other players like kirk Cousins and Cole Beasely who were upfront about it.

THen when he gets caught he acts like this great anti-vaxxer.

This guy is more two faced then Mitt Romney.

Ted has Democrats and GOPe types after him because he voted to challenge the election results. Mittens didn’t.

We can’t have people reading books containing ideas that dissent from Dhimmi-crat/Leftist orthodoxies and totalitarianism. That could be dangerous!