He also poked fun at Biden (called him dazed and confused) and criticized Harris during her short presidential campaign. 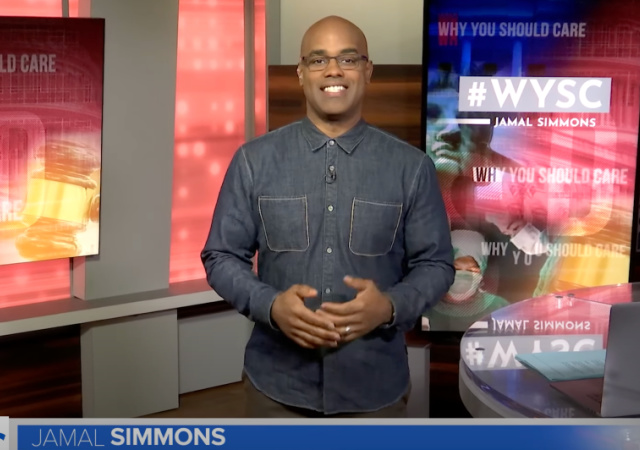 I also wonder if Harris will ever have a calm office. It’s one thing after another with her.

Also, this shouldn’t be a big deal, but hey The left made the rules. Do you want to nitpick old tweets? Let’s do this.

Her new communications director, Jamal Simmons, apologized for a 2010 tweet because he wanted to know why ICE didn’t do anything about two illegal aliens on MSNBC. 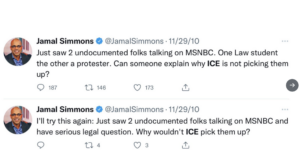 Simmons apologized: “As a pundit for much of my career I have tweeted a lot and spoken out on public issues. Sometimes I have been sarcastic, unclear, or just plainly missed the mark. I sincerely apologize for offending those who care as much as I do about making America the best, multi-ethnic, diverse democracy it can be,” he said. “I know the role I am taking on is to represent the Biden-Harris administration, and I will do so with humility, sincerity and respect.”

In response to these old tweets, Simmons says in a statement:
“Sometimes I have been sarcastic, unclear, or just plainly missed the mark.  I sincerely apologize for offending those who care as much as I do about making America the best, multi-ethnic, diverse democracy it can be” pic.twitter.com/ndpPpAy1xS

That’s not very cool considering Biden and Harris want to welcome everyone with open arms. I also believe Harris has a problem with ICE and immigration. Harris also compared ICE to the KKK in 2018.

But that’s the only tweet or remark connected to Simmons’s apology. He made fun of Biden in 2019 when he hosted a show:

Simmons previously hosted a news show for The Hill called “Why You Should Care,” in which he aired a segment in August 2019 titled “Dazed & Confused,” poking fun at Biden for the many conflated and exaggerated stories he’s told the public over the years.

“We do this story about once a week!” Simmons said at the time. “It’s what you get with Uncle Joe.” 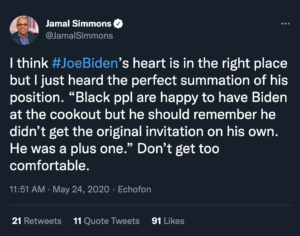 Simmons criticized Harris’s presidential campaign. He was softer with her, offering advice. But let’s just say he didn’t sound very confident about his now-boss:

Simmons also had a few things to say about then-Sen. Harris’ presidential campaign during the Democratic primary.

“Prior to the debate I had been having bad feelings about the Harris campaign,” he wrote in July 2019. “It seemed listless, unfocused. These lackluster fundraising totals are not a surprise. I’m curious to see how this changes over the summer, now that Kamala’s poll numbers have increased and Biden seems more like a winged bird than the inevitable nominee.”

After Harris dropped out of the race in December 2019, Simmons said Harris had a hard time going off script in her arguments and criticism of her opponents, and that she “never quite got comfortable getting out of the pre-planned moment.”

“When Kamala Harris goes into a room, frankly sometimes when Joe Biden goes into a room you just don’t know what will happen in that room, what they will argue,” Simmons added.

Simmons also slammed Trump for “pushing a janky science vaccine” but he’s a Democrat and they were all doing that.

Either way, I wonder how long Simmons will last. Harris’s office is a mess.

Well, the only thing I can see wrong with this story is that he’s jettisoning a history of truth for a salary as a whore. Am I reading it wrong?

You’re reading between the lines.

Some good news to remain hopeful by:

If we asked real nice, do you think the Brits would come burn it down again?

Jamal is a Booker wantabe

That’s a pretty low bar to be….he sounds like a real winner.

Maybe Crazy Joy Reid can join her staff, now that she’s looking for a job.