The CDC said it cut the isolation to five days because of science. It seems Fauci has been influenced by politics, including the largest nurses’ union. 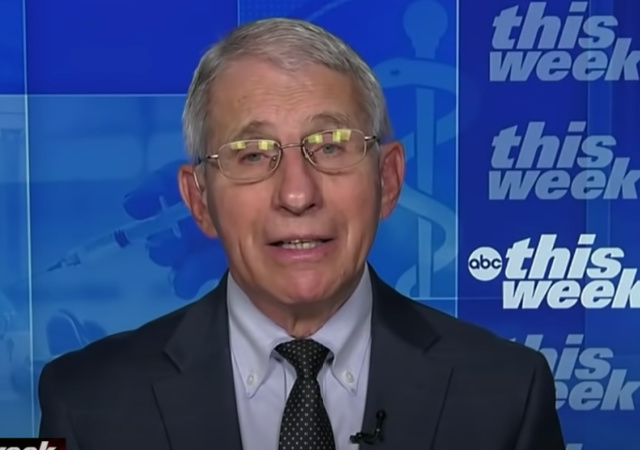 Americans who hoped for a reprieve from Biden COVID advisor Dr. Anthony Fauci in 2022 were disappointed if they tuned in to the news talk shows this weekend.

Fauci hinted on This Week with George Stephanopoulos that Americans could be forced to test negative before exiting the CDC’S new recommendation of five days isolation for those who do not show symptoms of infection (emphasis mine).

He said: ‘You’re right there has been some concern about why we don’t ask people at that five-day period to get tested. That is something that is now under consideration.

‘The CDC is very well aware that there has been some pushback about that. Looking at it again, there may be an option in that, that testing could be a part of that. And I think we’re going to be hearing more about that in the next day or so from the CDC,’ Fauci said.

Fauci’s latest remarks have seen him accused of flip-flopping on COVID yet again, with Americans given conflicting advice as cases surge and lines for tests lengthen. Travelers also endured another day of chaos at US airports, with 2,409 flights canceled across the country on Sunday afternoon, and another 4,758 delayed.

The CDC said science led to officials deciding you do not need a negative COVID test to end five-day isolation after you stop showing symptoms:

The CDC issued new guidelines for those who test positive on Tuesday, recommending a five-day isolation period, if asymptomatic at that point, followed by five days of masking when around other people.

The CDC said in a statement: “The change is motivated by science demonstrating that the majority of SARS-CoV-2 transmission occurs early in the course of illness, generally in the 1-2 days prior to onset of symptoms and the 2-3 days after. Therefore, people who test positive should isolate for five days and, if asymptomatic at that time, they may leave isolation if they can continue to mask for five days to minimize the risk of infecting others.”

The “pushback” mentioned by Fauci seems to have come from unions and politicians:

“Regardless of what CDC says, you really should try to obtain an antigen test (I know – easier said than done) and confirm it’s negative prior to leaving isolation and quarantine. There’s not a scientist or doctor I’ve met yet who wouldn’t do this for themselves/their family,” Adams tweeted.

BASH: "Are cotton and surgical masks effective at preventing the spread of Omicron?

This directly counters the statement of CNN’s medical analyst and other evidence that they are ineffective.

Cases in the UK are up 296% since mask mandates were reinstated a month ago and have nearly tripled since vaccine passports were introduced 2.5 weeks ago

The collective delusion of experts, politicians and the media that their policies make the slightest difference is astounding pic.twitter.com/jNFqcx2buR

Meanwhile, over 4,000 flights were canceled worldwide on Sunday, more than half of them were U.S. flights, due to a combination of adverse weather and the surge in coronavirus cases caused by the Omicron variant.

The flights cancelled by 8 pm GMT on Sunday included over 2,400 entering, departing from or within the United States, according to tracking website FlightAware.com. Globally, more than 11,200 flights were delayed.

Among the airlines with most cancellations were SkyWest (SKYW.O) and SouthWest (LUV.N), with 510 and 419 cancellations respectively, FlightAware showed.

The Christmas and New Year holidays are typically a peak time for air travel, but the rapid spread of the highly transmissible Omicron variant has led to a sharp increase in COVID-19 infections, forcing airlines to cancel flights as pilots and cabin crew quarantine.

Despite the massive chaos due to restrictions that have not stopped the cycle of surges, Fauci keeps doubling down on failure.

Given that all the guidance has failed to stop the spread, including masks and massive amounts of testing, perhaps it is time to question if Biden may not be the only administration official suffering age-related mental faculty impairment.

Fauci seems to be testing negative in American’s sight.

And, I want the good Doctor Fauci to commit an aeronautical procreational act with a perambulating piece of perforated pastry.

Stop with the case rates.
What is the mortality rate for Omicron?
Hospitalization?

According to friends, there are no home test kits to be found. Good luck testing at 5 days.
What a charade. What a charlatan.

The home test kits I saw were made in CHINA… Not feeling all warm and fuzzy.

And many people will trust the kits as safe and the results as accurate with no reliable evidence of either.

Made in CHINA. Don’t have FDA approval (Just EUAs for their use). And have an unacceptably high false positive rate that make them useless for the purpose they are intended for.

So what’s the point of these “home covid tests” again, exactly?

That means it ends immediately, if you can round up enough test kits. The false negative rate will eventually get you out even if you ought to test positive.

In rural Arizona the nearest testing site is 35 miles away. At home testing kits cannot be found within 50 miles. It isn’t any better in the SF Bay Area from my relatives…..my triple vaccinated brother had to drive 35 miles to be tested and find out he was positive.

I have a pair of shoes that were named after Fauci: flip flops. Every time I put them on I think of him.

They’re making so much shit up, we’re only days, maybe hours away from the CDC directing everyone to wear necklaces of Wolf’s bane and Garlic.

The flip-flops are calculated to amplify anxiety so we think it is too complicated and we then just submit to the tyrants. Fauci is not stupid. He is evil.

I mean no offense to Laurie, the author, or to Legal Insurrection, but perhaps it’s time to just stop covering Anthony Fauci.

Yours is the most INTELLIGENT comment written! STOP FOLLING HIS EVERY MOVE AND WORD. LET HIM FADE FROM PUBLIC VIEW!!

The run on test kits and difficulty getting PCR tests is a country-wide phenomenon, and Fauci all of a sudden wants to pile on more people who will be looking for them?

My NextDoor feed is pretty much every second post being need/want to get tested, can’t find kits or where can I go to get a test done.

As I vaguely remember, you can test positive on a PCR test for a week or two after recovering from Covid and being non-infectious, so testing that way to indicate you’re ‘safe’ to return to the real world is quite iffy. And antigen testing has its own can of worms (metaphorical only) where it is only really accurate for full-blown cases. Now let’s add in the false positive and false negative results found in the real world, which are considerably greater than the manufacturers admit, and we have a full Fauci, i.e. a statement made which is different than anything he’s said before, of limited practical use, and considerable cost to society without a comparable benefit. If it were his first, that might be acceptable, but he’s been blurting out full Fauci statements since Day 1 of this mess.

Fire him. Get somebody in there who can say the same thing in two sequential interviews.

Yup. That’s one reason why the CDC said you don’t have to test negative to end isolation.

Maybe if the sky wasn’t always falling he might think a test to prove you had the antibodies might be an option.

Great. We have two America’s – one that lets you decide when to go back to work and one which requires a negative test.

now that we have a shortage of test kits, guess which one is going to have further disruption to keeping businesses going.

All this for a disease so toxic, you don’t know if you have it unless you test.

And big-tech is trying to suppress discussion about Mass Formation Psychosis – not surprised.

Karen used to shout “put on your mask. Now she will be screaming “where are the test kits??? The world is ending!!”

Fauci is going to pretend this has everything to do with “the science.” It doesn’t. Biden’s leftist base and the media freaked out when they lowered the quarantine period from 10 days to 5. Just like they let the teachers’ unions dictate that students must be masked (but teachers don’t).

At what point do we let the malignant little covid gnome he can’t get away with his “I am the science” bulls***?

The pushback on a no test requirement post quarantine +asymptomatic is a result of panic/hysterics from the Covid koolaid Karen. This was actually one of the better decisions made in that it accounted for:
1. Asymptomatic spread following quarantine was low risk
2. Lack of test kits
3. Potential for false +
4. Staffing disruption /economic harm /school closures
5. Omicron becoming dominant strain/ far less serious but far more easily transmitted

IMO it took all these factors into consideration to prevent the foreseeable consequence of rigid testing requirements: not enough tests + false positive = massive staffing shortage. That shortage = massive disruption; school closed, flights cancelled, goods not delivered, medical care delayed. All that would be a massive problem for the economy self inflicted by the Admin.

The federal government cannot fix the pandemic… but they sure as hell can make it worse.

“There is no federal solution to the virus. Only a federal exacerbation.”

This constant flip-flopping is a direct result of opening your big mouth before you have thought a problem entirely through.

In my occupation, this is referred to as “butt-first engineering.”

The classic example is the (usually Asian) assembly instructions that say, “Using your hacksaw, carefully cut part K to match the length of assembly F-G-H. But first, make sure that G has been attached to F and H by the outer pair of screw holes, not the inner pair.” Yeah, thanks for that, you morons, I already cut part K too short.

Fauci has done nothing but butt-first engineering. He collects half the data, then makes a Pronouncement of Authority. Then the other half of the data comes rolling in, and he looks like the incompetent idiot he is.