Denmark Will End All COVID Pandemic Restrictions This Week

Denmark Will End All COVID Pandemic Restrictions This Week

The nation, one of the first now go all-in aggressive pandemic response, now ‘Welcomes the life we knew before.” 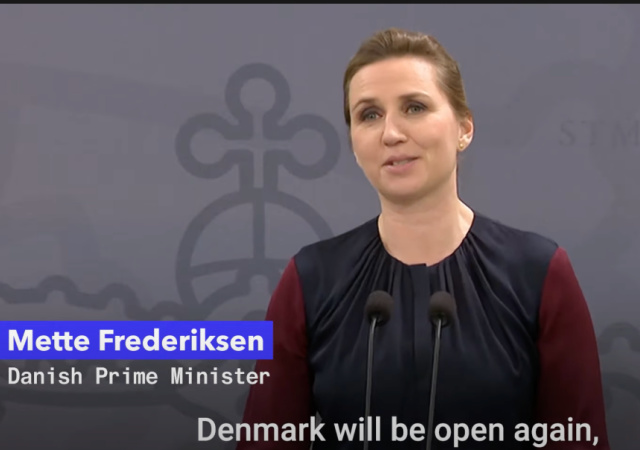 Denmark has had among the most robust pandemic restrictions in place since 2020. It was one of the first European counties in 2020 to close schools and send employees home.

Now, the nation is slated to end those restrictions within the week.

Denmark aims to scrap all remaining domestic COVID-19 restrictions next week, following on from similar announcements in the UK, Ireland and the Netherlands in the past week despite high numbers of Omicron infections in Europe.

The Nordic country already loosened restrictions two weeks ago after a month-long lockdown, allowing cinemas and music venues to reopen, but some rules remain, including limited opening hours for restaurants and mandatory face masks. read more

In a letter to parliament, Health Minister Magnus Heunicke said the government intends to follow recommendations issued by an expert panel on Tuesday to scrap all restrictions by Feb 1.

Denmark joins the now expanding list of counties, including the United Kingdom and France, ending most if not all of their pandemic policies in the wake of the highly infectious by relatively mild (for most people) Omicron variant.

Included in the rules being tossed away are mask mandates.

“We say goodbye to the restrictions and welcome the life we knew before,” Frederiksen said. “As of Feb. 1, Denmark will be open.”

According to Health Minister Magnus Heunicke, Denmark’s recent cases of COVID were more than 46,000 daily on average; however, only 40 people are in hospital intensive care units.
Newsweek Newsletter sign-up >

“We continue with a strong epidemic surveillance,” Heunicke said according to the AP. “Then we…can react quickly if necessary.”

Despite lift of restrictions, Frederiksen warned there could be a rise in infections, which may lead to a fourth vaccination shot being necessary.

“It may seem strange that we want to remove restrictions given the high infection rates,” Frederiksen said. “But fewer people become seriously ill.”

Meanwhile, our press focuses its coverage on the “stealth Omicron” sub-variant.

Nearly half of U.S. states have confirmed the presence of BA.2 with at least 127 known cases nationwide as of Friday, according to a global data base that tracks Covid variants. The Centers for Disease Control and Prevention, in a statement Friday, said although BA.2 has increased in proportion to the original omicron strain in some countries, it is currently circulating at a low level in the U.S.

The subvariant is 1.5 times more transmissible than the original omicron strain, referred to by scientists as BA.1, according to Statens Serum Institut, which conducts infectious disease surveillance for Denmark.

The new sublineage doesn’t appear to further reduce the effectiveness of vaccines against symptomatic infection, according to the U.K. Health Security Agency.

Went our to the theatre on the weekend and was asked for my papers 🤣 Was then asked some pointless questions about the Chinese virus when I didn’t give over my papers. She then moved on getting the same response from everyone else in the queue 🤣

You can shove those papers up your fucking arse 🤣

“Something is rotten in the state of Denmark”

WHY ARENT THEY FOLLOWING THE SCRIPT???

they must hate grandparents. In fact, anyone ever see an actual grandparent in Denmark? Didn’t think so.

Denmark is killing children! And grandma!

Yes. Due to their Prime Minister’s rules. His name is Cuomosen.

“The new sublineage doesn’t appear to further reduce the effectiveness of vaccines against symptomatic infection, according to the U.K. Health Security Agency.”

Because there isn’t any effectiveness

“Because there isn’t any effectiveness”

Yeah, but if you wear a mask it makes you feel good.

Not me, makes me feel stupid. Got in an argument with one of my Drs, he’s a real proponent of it
Wasn’t going to win that one, so I let it go. You should have seen the mask he had on , a rebreather

I pull my mask over my eyes at night when I go to bed. It makes me sleep better.

Last year I was pretty much the last “patient” at my local Wellness Clinic. Naturally, like everyplace else in the medical world, masks were required for all patients AND staff, along with “social distancing”. As I was leaving, I happened to look into their break room and saw their entire staff sitting cheek to jowl, without a mask in sight. Haven’t been back.

A resident in my care needed to go to the emergency room. She has dimentia, so I went with her. The EMTs were conscientious about her wearing a mask and their wearing a mask. None of the nurses at the nurses station had masks on. The EMT assured me an ass chewing was in store if they didn’t have a mask. Yup. Theater all the way down.

What will we do with the doctors and nurses who didn’t push for hydroxyGoBradonchloraquin and ivermectin?

This is a big win, and what we should hope to happen everywhere.

Remember elections have consequences, Denmark is fortunate they elected someone who could de-facto admit she was wrong.

When asked to comment Neil Young said.. “What’s Denmark’s URL? Will this affect my deal with Blackrock?”

As I stated before, late January and February is the tide rolling out for Covid mania in terms of public tolerance. We will now have the examples of western Nations choosing a different course to compare the US against in addition to the performance of red v blue States not only in Covid response but also economic performance. The lockdown States lag considerably in employment rates.

Outside the Covid karens, which include members of the media and blue enclaves, I suspect that the vast majority are ready to drop masks and mandates. The folks buying cartons of n95 and hand sanitizer in bulk are not likely to give in willingly. Nor are the political leaders and public health folks who like being able to order society as they wish because of the ’emergency’. Expect lots of posturing and finger wagging moral preening before this ends.

Here in New York, the state government – or local transcription-service local “news” outlets – don’t seem to want the unwashed citizenry to know that our new lady Governor AGAIN extended her “emergency” powers (it seems solely on her own say-so) until February 15.

S9, unfortunately for my dear wife’s sake, my unruly Kung Flu protest beard must go on at least past St. Valentine’s Day.

If people exclusively rely upon on traditional media without any exploitation of alternatives on radio, blogs, podcasts, internet aggregation sites they are not ready to be informed. That’s not to say one should rely on any particular source but rather to look for formats where a particular topic of personal interest is being addressed and simply take a look.

Obviously the internet is full of fraudulent weirdos spewing nonsense but not all of them. Some are quite reasonable even when wrong, but until a person decides to look somewhere beyond the largely lockstep traditional media they likely are not mentally prepared to receive new or different ideas and viewpoints.

Denmark has apparently also developed the technology to eliminate all of us internet blog trolls:

It’s always a good idea to keep track of these small countries.

We must never allow such “emergency” powers to be wielded like this ever again. I don’t care what the emergency is – be it a mysterious bug or an alien fleet that threatens to wipe out mankind. No. Dictators. Period.

Let us take responsibility for ourselves. There’s no way that every man fending for himself could possibly be a greater fustercluck than what these global “leaders” have foisted upon us for the past two years.

The day after Roe. Follow the science, not cargo cult, per chance em-pathetic appeal. Ah, but viable legal indemnity.

Denmark, unmasked. Their published reports indicate that they are reaching community immunity despite their restrictive mandates and liberal consumption of non-sterilizing “vaccine(s)”. Did they close planned parent/hood?

Remember folks, it was only a few months ago, in September, 2021 that Denmark was saying, “No lockdowns, no passports, no masks” — But then flu season started and it all came back instantly.

While it’s great that Denmark seems to be coming to its senses (again), the reality is that these measures are deeply immoral and evil.
* How many people died as a result of lockdowns, missed medical appointments, supply chain interruptions?
* How many people were denied access to society through totalitarian passport systems?
*How many people died from adverse reactions to the completely unnecessary (& ineffective) injections?
* How many children are developmentally disabled due to two years of psychological torture and missed growth?

We were told these measures were necessary to save lives. But as it turns out, none of the policies that we pursued had any meaningful impact on the transmission of the virus. Everyone still got sick, but it was all made worse by the stupid & arbitrary, rules and psychologically-damaging fear that our governments intentionally fostered.

Real consequences must accompany the end of this. If you, as a politician or bureaucrat, want to wield powers to deprive citizens of life & liberty, then the consequence of failure should be — at the very minimum — commensurate with the powers you wield.

masks will only be required in hospitals, healthcare facilities and homes for the elderly

Never mind that masks continue to be, and always were, completely useless against respiratory viruses. The medical theater must continue.