The GOP party preference went up as Biden’s job approval went down.

The Democrats had a preference advantage among Americans starting 2021. It did not last long. 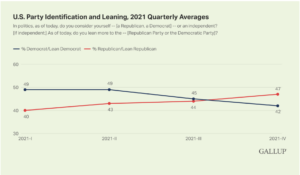 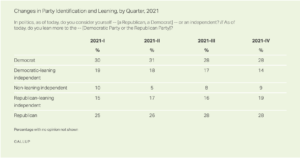 Gallup asks people if they identify as Democrats or Republicans. The Independents are asked if they lean Democrat or lean Republican:

Both the nine-point Democratic advantage in the first quarter and the five-point Republican edge in the fourth quarter are among the largest Gallup has measured for each party in any quarter since it began regularly measuring party identification and leaning in 1991.

Gallup noted the change in party preference changed with Biden’s job approval. Biden had a 57% approval rate at his 100-day mark.

The approval rate continued to drop. On July 29, Biden’s approval hit 50% when people realized Biden did not shut down COVID.

Biden went down to 43% in September after the horrendous Afghanistan withdrawal.

Biden’s approval is still around 43% as we face historic inflation and more COVID cases.

Gallup also found that Independents make up the largest political group in the U.S. This explains why the Democrats and Republicans take turns holding power in Congress:

Overall in 2021, an average of 29% of Americans identified as Democrats, 27% as Republicans and 42% as independents. Roughly equal proportions of independents leaned to the Democratic Party (17%) and to the Republican Party (16%).

The percentage of independent identifiers is up from 39% in 2020, but similar to the 41% measured in 2019. Gallup has often seen a decrease in independents in a presidential election year and an increase in the year after.

Somebody tell the Dimocrats to keep on keepin’ on.
.

But as Professor Reynolds would caution, “Don’t get cocky”.

It’s so efficient. Like the bookie who throws the shovel at the bankrupt gambling addict and orders him to dig his own grave. If you can make them do it, you don’t have to do it yourself.

But I though it was a record turnout for Joe. Beware of the echo of your lie.

43% is a fake number….I don’t know one person that isn’t a twitter bot happy with Biden to date.

That includes hardcore Dems who either think he isn’t doing enough to go far left or things aren’t being handled the right way to remain accountable to the people that got him elected, particularly minorities.

And right on cue, Biden comes out and announces that George Floyd’s death had a greater impact on the world than the assassination of Martin Luther King.

I suppose that means a George Floyd holiday is in the works?

As son as they can get their website set up, the feds will be sending every family up to four free Fentanyl patches.

But to honor George you would need at least 50 fentanyl patches.

Then you would have to put them in your mouth and swallow them.

Just pay a little extra for shipping and handling.

Exactly. Tucker pretty much said that last nigh. The impact was the Summer of Love.

Joe needs to do a little something for those mopes that voted for him. Forty acres and a mule or something similar.

They’re gonna be pissed. They were expecting dachas on the Volga.

In these politically crooked days, polling results have about as much integrity as the announced voting results. Definitely, work to get rid of as many Democrats and RINO’s as possible in November. But keep in mind that a) there is no legal or electoral penalty for Democrats if they steal the elections again, and b) if they are stolen a second time the American people cannot depend on the current process to allow consent of the governed and another Social Contract may need to be devised and implemented.

Hopefully the supply crisis, housing shortage, and inflation teaches the the country that a nation’s success is to produce and trade, not tax and endlessly print money. Somehow, communist China understands this much better than the US.

China is collapsing. They won’t be a cohesive functional country in 10 years. I just hope the USA is.

If you look at Marxism correctly as a locust phenomenon, and recognize that fields may die but the swarm simply moves elsewhere to survive, you already know what the plan is.

After the true insurrectionist burning and looting of America (along with denigrating and trying to destroy every statue and symbol of America they could find) the only people who would even think of voting Democrat were those who hate America with a vengeance and were looking for nothing less than our total destruction – i.e. the Barky voters.

The insurrectionist riots of 2020 should have been met with immediate deadly force and those politicians and officials who aided and abetted the insurrection (such as the Seattle mayor who thought nothing of letting a bunch of retarded thugs actually seize American territory and declare a new nation on it) should have been dragged out of their offices kicking and screaming, thrown in jail and had the key thrown away. Seriously. The biggest mistake was for the GOP not to stand up strongly for the Rule of Law and enforce it mercilessly and without apology.

That Gallup poll about the Democrats’ supposed huge advantage going into 2021 is cooked bigtime so as to provide cover for a stolen election, don’t you know?