Two people drowned by high waves in Peru after eruption. 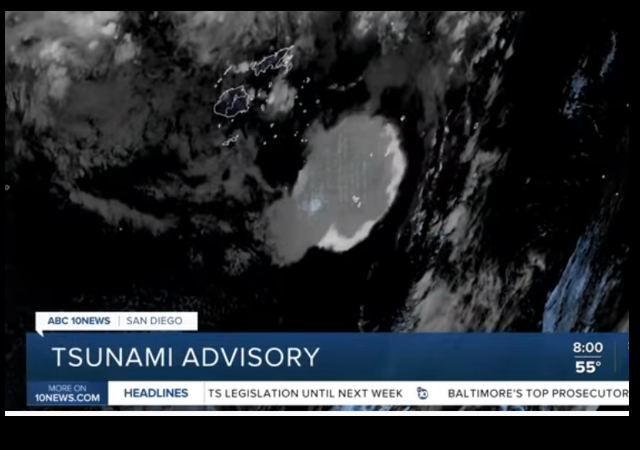 There are some troubling updates about the island kingdom of Tonga, which was slammed with tsunami waves this weekend after the eruption of a nearby volcano.

And while much of the US West Coast was under a tsunami advisory, the waves that struck generated mostly entertaining videos and minor damage. Unfortunately, conditions on Tonga remain unknown after its internet went down following the arrival of the tsunami.

An underwater volcano that erupted in Tonga was a ‘massive explosion’ that only happens ‘roughly every thousand years’ and was so large it was visible from space.

The explosion triggered a 7.4-magnitude earthquake and sent tsunami waves crashing into the coast of the Pacific island, leaving it covered in ash and cut off from aid.

…Tsunami-hit Tonga remained largely uncontactable on Sunday with telephone and internet links severed, leaving relatives in faraway New Zealand praying for their families on the Pacific islands as casualty reports had yet to come through.

Professor Shane Cronin, from the University of Auckland, is an expert in Tonga eruptions. ‘This is one of the massive explosions the volcano is capable of producing roughly every thousand years,’ he wrote in The Conversation.

Prof Cronin added: ‘We could be in for several weeks or even years of major volcanic unrest from the Hunga-Tonga-Hunga-Ha’apai volcano.’

Video captured the sonic wave of the explosion as it hit one of Tonga’s islands.

Incredible Footage of Hunga Tonga volcano that Produced a Extremely large eruption as it generated powerful Sonic booms that Traveled as far as 470 miles of the fiji islands pic.twitter.com/irMDMesz5Z

The nearby eruption also sent a thick blanket of ash into the sky, which has contaminated Tonga’s water supplies and initially prevented surveillance flights from assessing the extent of the damage. Australia and New Zealand launched flights to begin aerial damage assessment.

A surveillance flight departed Australia for Tonga on Monday morning to assess damage to critical infrastructure such as roads, ports and powerlines and determine the next phase of the response effort. It was delayed due to the ash cloud blanketing Tonga but eventually took off.

A Royal New Zealand Air Force Orion plane also managed to depart from Auckland on Monday to assess initial damage in the area.

In a video posted on Facebook, Nightingale Filihia said she was sheltering at her family’s home as volcanic ash and tiny pieces of rock rained down and turned the sky pitch black.

“It’s really bad. They told us to stay indoors and cover our doors and windows because it’s dangerous,” she said. “I felt sorry for the people. Everyone just froze when the explosion happened. We rushed home.” Outside the house, people were seen carrying umbrellas for protection.

More than 20 Peruvian ports were temporarily closed as a precautionary measure amid warnings that the volcano was causing abnormally high waves, Indeci said.

The Peruvian police said on Twitter that the two victims were found dead by officers from a Naylamp beach police station. The tweet said “the waves were abnormal” in the area and that it had been declared unsuitable for bathers.

“PEARL HARBOR, Hawaii — A ‘freak’ wave crashed over the aircraft carrier USS Carl Vinson, sweeping seven men into the Pacific Ocean and injuring another sailor during the weekend, the Navy said…”

God, she scares me. Maybe you imagine that I’m a drama queen. But the flight deck on the Carl Vinson is 80 feet above the water line. When you see green water breaking over the deck, when you’re walking on the bulkheads, if you]re not scared you are doing something wrong.

I live now in North Texas. As far away from the ocean as I can get.

My prayers are with Tonga like you can’t believe.

I believe three destroyers lost. I don’t know how many aircraft lost. Swept over the side.

It severed the undersea cables to Tonga, is all. There’s still radio. I’ve worked Fiji that’s about 400 miles away with a 15 watt transmitter so it’s not like it takes much.

Satellite internet to the island is probably totally screwed because of the ash dispersal. Rain clouds are enough to hamper it.

More people in America were killed in one week by insane people walking the streets of Soros DA’d NY and Los Angeles than were killed in an entire nation struck by one of the deadliest of natural events.

Not me, asshole. I can defend myself from knives and guns. And, OK, if I lose, I won’t bitch about it.

I picture a senile old curmudgeonly but entertaining conservative (kinda the anti-Biden if you will), and I hope he has family to support him.

Now I have to call her. Because, admi it? Caling her after I’m dead” Is that not funny or what?

I was a deck hand on a Great Lake freighter in 69-70. If you have never experienced a winter storm on Lake Superior, consider yourself lucky. This was a 600 foot ship and waves would break over the railing – about 35 feet above the water when loaded. We had to attach safety lines so we wouldn’t get washed overboard when on deck. The coldest I have ever been, and the most scared.

I’m with you, brother. I had at first felt invincible going to see in carriers. Then the idiot aircraft pilot the Navy decided to put in charge of the battle group decided to cross the T of a typhoon. That’s when I was the most scared in my life.

The coldest I’ve ever been?

It gets cold in the desert.

I recall the time we were cruising the South Pacific. An aviator disrespected a maintainer. So the next time the aviator took off, the maintainer was standing at the end of the runway. Yes, we’re not at sea all the time. So he’s at the end of the runway. Holding the charge for the ejection seat. The aviator had to fly the entire mission wondering if his ejection seat would work.

I’ve had the opportunity to spend some time in Tonga. They are legit some of the nicest people in the world. They live a pretty simple life. There wasn’t a lot of infrastructure there before this; not primitive by any means but, austere, frugal. I can’t imagine what it might be like now. It’s hard to appreciate how isolated they are unless you’ve traveled there. and how challenging that will make relief efforts.

You might consider fixing the spelling in the headline…

Nothing said about the possible killing of numerous amounts of fish and other sea life. Of course the greenies will blame this on globull warming. This is a sign of the times we live in. Jesus said it would be this way just prior to the time He returns.