“Is this Trigglypuff all grown up?” 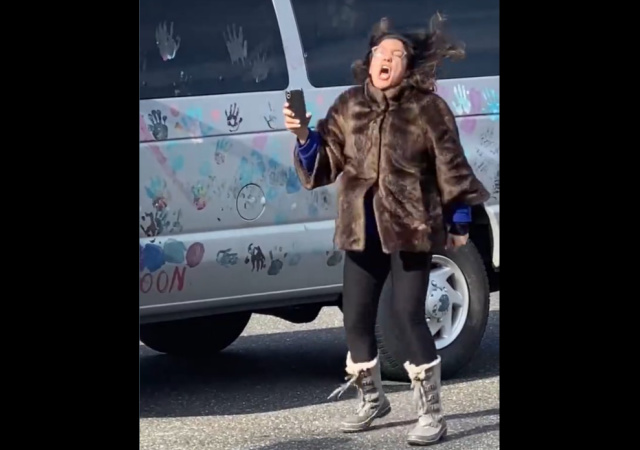 Almost 35,000 people attended the “Defeat the Mandates” protest in Washington, DC, to demand an end to the stupid COVID-19 requirements around the country.

They took part despite the freezing cold weather to fight for freedom.

Then there’s this chick who threw a temper tantrum better than a 4-year-old. Stop invading her territory, you guys.

Live look at the libs in DC at the Anti-Vax Mandate protest on the National Mall.

We will never stop invading “your” territory. pic.twitter.com/RTUXeVV4ow

A little long winded for my liking but I think it gets the point across. pic.twitter.com/6X0jXXd9A0

Is this Trigglypuff all grown up? https://t.co/oFZ6uEYdtZ

This lady driving the children's art project van is mentally-unstable & living in a disillusion. https://t.co/y4Ho9SDJmk

Someone get this lady to a kickboxing class and the nearest cantina for a margarita stat https://t.co/XIEvdrmXcf

Why is this the left's go-to for sharing ideas or 'protesting?' They always just stomp about shouting angrily. https://t.co/wKlVlzgfVJ

"Why do you always draw the left as hysterical maniacs you only have one joke lol" https://t.co/Hq6mcwCZ50

Looks like she didn’t take Jen Psaki’s advice on drinking a margarita and taking a kickboxing class https://t.co/cn161Zl3bT

There is will be no excuses for those here who insist that covid is a genuine pandemic. It’s a severe virus that has been hijacked by a small cabal of well organized and financed globalists trying to take control of the world.

It is a genuine pandemic…the word literally means a disease that spreads around the world, no matter how severe.

The only question is the severity and the policy and that is a matter of debate that relates to both medical/social ethics and philosophy/worldview.

Weaponizing science (esp. the pseudosciences from the “social science clusterf*ck” for debate is the biggest problem facing the world right now.

It may be a valid pandemic, but this is not the killer disease the early fear mongers warned us of and for most of the population it was never more than a middling-to-bad case of the flu, and the Delta variant, while more easily spread was less virulent and was likened to a bad cold or mild flu in severity. Omicron, while even more easily spread, is even less virulent and I wonder if most people would even know they had it unless they were hypochondriacs and got tested every time they coughed. None of which means that respiratory infections should be ignored or not taken seriously.

It’s time to end the panic and get on with life.

Love her faux-arctic coat and boots.

Not to be confused with paranoia, given that her actual problem is excessive gullibility.

She went entirely unnoticed at the event.

I’ve seen similar foot moves on a four year old girl who reallly, really needs to go wee wee and is having trouble holding it in. OTOH the 4 year old girl was more intelligent than this creature.

“Take your Looser president and shove him up your…”

Anyone tell her we only have “one” president? I’m not too keen on shoving Biden up any part of my anatomy.

Um. I may not be thrilled about it, but Biden is my President.

Where did she get that ‘we’ were pulling the ‘not my President’ bs that they pulled?

Biden is not your president, or mine. He’s president of the United States of America, which neither of us is, since it’s not a person. (Neither is he your commander in chief, unless you’re in the armed forces.)

I don’t think she claimed that the demonstrators were claiming Trump was still president. She seems to have imagined that they were (1) white supremacists; (2) partying; (3) celebrating Trump. None of these things are true.

They disagreed with her, therefore all of those things were true.
Credo, ergo est.

Pedantic Captain Obvious fresh off the MENSA meetings leaps in and saves the day.

Thought at first glance it was Rashida Tlaib, or perhaps her sister.

What’s the over or under on whether she’s a school teacher or librarian?

With that van? What’s the spread?

I have translated DC Karen’s lunatic ranting: “Why can’t I get a date?!?”

Because she doesn’t know that fur is murder? /S

From the endangered Nauga.

In today’s episode of nature…..

Look closely as we observe the grooming habits of the warbler Karen, a rare subspecies of the suburban Karen. See how she uses her piercing shrieks to ward off opponents and warn others from encroaching into her domain.

“Trigglypuff, all grown up”

Heh heh. Is it wrong to put forth the supposition that menses is happening?

Is she even qualified for that high-IQ group?

Please let a red tsunami wash human garbage like this away.

And they responded to this display of utter insanity with a laughably staged fed video of the laughably obvious fedboy video of them ‘forgetting’ the camera was on, but managing to still not show a single one of their faces.

I wish people would look at this and realize that you CANNOT REASON with insane trash like this.

This is what the Democrat base is. RINOs need to stop thinking that they can reason or negotiate with these lunatics.

Am I the only one who is confused by this label in the tweet?

No, the protest was against the vax mandates. It was an anti-vax-mandate protest.

Protest, by definition, is anti. So an anti-protest is a counter-protest – in other words, an endorsement of the thing under protest. So I’m laughing Milhouse about where to put the emphasis – specifically, is there an “anti-vax mandate”, i.e., a mandate that requires people to be anti-vax? Or is it an “anti-protest” …

I just got a giggle out of it – because it’s a double-negative of sorts.

A protest against vax mandates. There, FIFY.
.

Oh get a friggin’ hobby.

Is everyone here done with enabling crazy people running our government and our schools?

“Is this Trigglypuff all grown up?”

not unless she’s lost the equivalent of a Greyhound bus in weight.

Libs of tictok have tons of karens. Check out the masked old racist white women berating and hitting a black man while shouting black lives matter.

Meanwhile, SCOTUS squashes without comment a challenge to the even more useless mask mandates on airplanes.

Did they squash the challenge or the emergency appeal for a stay?

“The application for stay addressed to Justice Gorsuch and referred to the Court is denied,” Doesn’t this mean it goes back to the lower courts?

A couple of water balloons might be in order.
.

The left and their PETULANT POMPOUS chrens & FOOLS

She is proving once again that it is a pandemic of the hysterical.