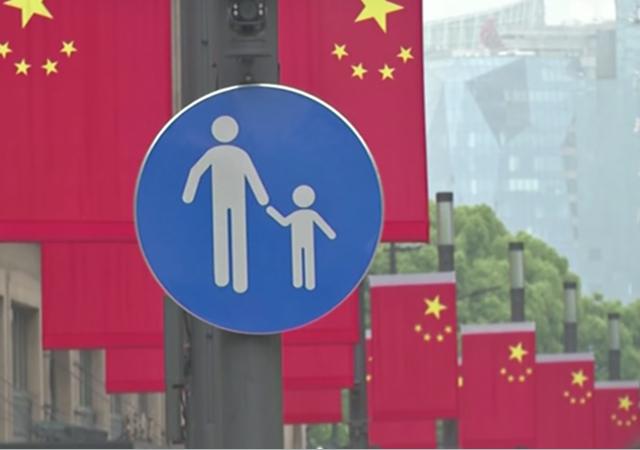 China’s population growth hits a new low as birth rates drop to the lowest level in more than sixty years, official Chinese figures show. “The number of newborns in China fell for a fifth straight year to the lowest in modern Chinese history,” newspaper The Australian reported citing the demographic numbers released by China’s National Bureau of Statistics (NBS).

Despite a slight rise in the total population, deaths across China outnumbered the shirking birth rate. “China’s National Bureau of Statistics show that in 2021 in a nation of 1.4 billion people, there was a net population growth of only 480,000 people — against 10.1 million deaths and 10.6 million births,” the Voice of American noted.

The birth rates across the country are in sharp decline despite stringent measures taken by the Chinese Communist Party (CCP) to boost the population growth. In 2015, China scrapped the harsh one-child mandate, changing it to two-children-for-all policy. In August 2021, the CCP enacted a law allowing couples to have up to three children.

Mainland China’s population increased by less than half a million last year, and the number of births also dropped for the fifth consecutive year in 2021, data released on Monday showed.

China’s overall population increased by about 480,000 people – to 1.4126 billion in 2021, from 1.412 billion a year earlier, the National Bureau of Statistics (NBS) confirmed. The population includes China’s 31 provinces, autonomous regions and municipalities, as well as servicemen, but excludes foreigners. It does not include Hong Kong, Macau or Taiwan.

Experts have warned that a demographic turning point may be just around the corner in the world’s most populous nation, and some say it threatens to erode the foundation of China’s booming economic growth over the past 40 years.

Faced with an alarming population decline, the CCP is ordering its 95 million members to have more children. In November 2021, the CCP mouthpiece China Reports Network published an editorial telling party members that they “should shoulder the responsibility and obligation of the country’s population growth and act on the three-child policy.”

“No party member should use any excuse, objective or personal, to not marry or have children, nor can they use any excuse to have only one or two children,” the editorial instructed.

The roots of the Chinese demographic decline lie in its one-child policy enforced in 1980. Fearing overpopulation in the late 1970s, the CCP enforced “family planning” measures, mandating people to marry late, and have fewer and fewer children. This later culminated in the one-child policy that led to tens of millions of illegal abortions, disproportionately targeting the girl child. According to a 2016 estimate, due to this inhumane policy China has 30 million more men that women.

While the CCP has laid out plans for surpassing the U.S. in military might, its aging and declining population will be a great impediment as Beijing tries to project its power in Eurasia and Pacific. The Communist giant is threatening to invade neighboring Taiwan and has repeatedly clashed with India over a 2100-mile long disputed border.

Birth rates have been dropping over most of the developed world. Communism has nothing to do with it.

Consumerism is the villain. As long as self-fulfillment is defined as how much stuff you have and how many “experiences” you can buy, there’s no incentive to waste your money on children who don’t yet exist.

Consumerism is a villain. It is not THE villain. There was mass forced sterilization in China. Mass abortions. Total imbalance in male-female births. The effects of those things can never be changed in a few years.

They may be considering a war to thin out the excess male population.

In other words, if Xi wants to go down in history as the man who reunited Taiwan with China, he needs to pull the trigger sooner rather than later. Plus, how much longer can his senile puppet remain in the White House?

De Facto President George Soros is in his third term. His puppets are of unlimited supply.

“No party member should use any excuse, objective or personal, to not marry or have children, nor can they use any excuse to have only one or two children,” the editorial instructed.”

Geez, these guys are absolute masters of central planning.
“ODD NUMBERS — INTO THE BEDROOM! NOW!”

I suspect the decline has little to do with the one child policy. i suspect the exorbitant cost of an education and housing, the laziness of the current generation of males, the social need of Chinese females to be “modern” professionals. the lack of grandparent babysitters in the city and the preference to abort female feti have more to do with the current lack of children.

I strongly suspect you’re wrong, and that it has everything to do with the one child policy especially in a country like China where male heirs are strongly preferred over female children. If you’re only going to have one child, then that child is going to be a boy.

Only above the age of 65 do women outnumber men. And that does a country no good when it comes to producing children.

If you want to avoid population decline, don’t do something as stupid as implement a one child policy. If you limit a man and a woman to only one child by definition you are not replacing the population; one child can not replace two parents. Parents in developed countries need to have on average 2.1 children merely to maintain the population (in developed countries the .1 children are built in as a 5% buffer; and who knows what that buffer needs to be in a country with higher infant/childhood mortality like China). And then if the inevitable result in a culture that favors boys over girls, and if you limit Chinese parents to only one child that’s what you get, then you’ll have fewer marriageable women.

It would be interesting to know what percentage of the referenced female population has taken a covid vaccine. It’s well known they cause miscarriages, so other long-term fertility problems wouldn’t be surprising.

It’s well known they cause miscarriages, so other long-term fertility problems wouldn’t be surprising.

According to government bureaus and their lapdogs in the MSM, who claimed that the story about the virus originating in anything other than a “Chinese wet market” were also myths.

Once you adopt the Pro-Choice religion (“ethics”), not limited to elective abortion (e.g. one-child, or selective-child/one-child delegated) it’s hard to go back. That said, a civilized society should be wary of constructing a progressive condition when normalizing a religion that normalizes sacrificial rites for social, redistributive, and fair weather causes. The Pro-Choice religion denies women and men’s dignity and agency, and reduces human life to negotiable assets.

How long before the libtards start celebrating the end of China? After all, they damn near ejaculated in their pink panties when they heard that the birth of white people in America was in decline and by 2050 would be a minority.