Meanwhile, the city of Xi’an has reported an unspecified number of hemorrhagic fever cases, and a Canadian officer has demanded an investigation into possible COVID exposures at World Military Games 2019. 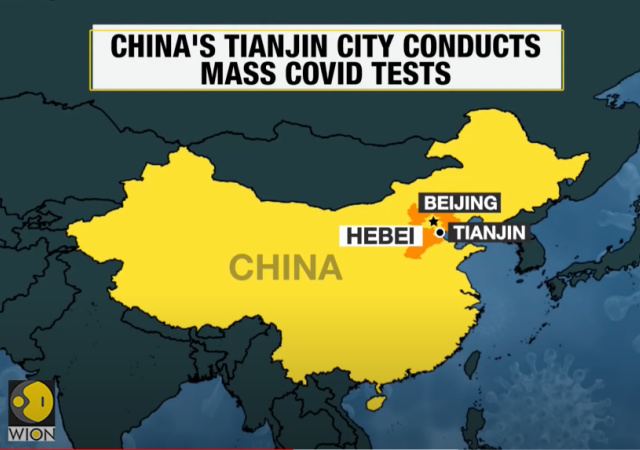 Some disturbing developments are coming out of China, despite the nation’s attempts to suppress all news that reflects poorly on it.

To begin with, China has implemented lockdown measures in at least three cities over the Omicron variant. The lockdowns include the important port city, Tianjin, which is close to Beijing.

On Monday, officials in Tianjin, a northern Chinese port city of 14 million, reported 21 domestically transmitted cases, according to China’s National Health Commission, bringing the total over the last two days to 40, including at least two cases of the Omicron variant.

The situation has taken on heightened urgency in China given Tianjin’s proximity to Beijing. Many commuters travel daily between the two cities, often using high-speed rail, which takes about 30 minutes.

In response to the threat of rising infection rates, Tianjin officials have quickly moved to enforce lockdowns in several affected neighborhoods. Widespread testing of the entire city was still underway on Monday. The authorities have also tightened travel restrictions into and out of Tianjin, requiring residents to obtain approval from employers or community officials before leaving. And starting Sunday afternoon, train tickets between Tianjin and Beijing were suspended for purchase.

Currently, lockdowns are being implemented in Xi’an and Yuzhou, in Henan Province.

But there are even more problematic revelations coming out as Olympians begin making their final travel plans. Xi’an is also reporting several hemorrhagic fever cases.

Xi’an city’s confirmed coronavirus case count is far lower than what other cities have reported overseas. But the city has also reported an unspecified number of hemorrhagic fever cases, a high mortality disease transmitted by rodents.

Local authorities have noted the disease appears seasonally, typically from October to January, and from April to June.

There is not much information on the specifics related to hemorrhagic fever, and the cases may be caused by pathogens transmitted by rodents, shrews, and moles.

Hemorrhagic fever with renal syndrome (HFRS) is a zoonosis characterized by clinical features of high fever, hemorrhage, and renal damage. China has the largest number of HFRS cases worldwide, accounting for over 90% of the total reported cases.

On the other hand, the Republican House Committee investigating the origins of COVID points to the World Military Games as being the event that led to the global spread of the SARS-CoV-2 virus.

The 7th International Military Sports Council Military World Games (MWGs) opened in Wuhan on October 18, 2019. The MWGs in Wuhan drew 9,308 athletes, representing 109 countries, to compete in 329 events across 27 sports. Many of the participating athletes fell ill with various flu-like complaints. Here is a glimpse of the sick athletes and their location in the hospitals…now seeing ill patients. 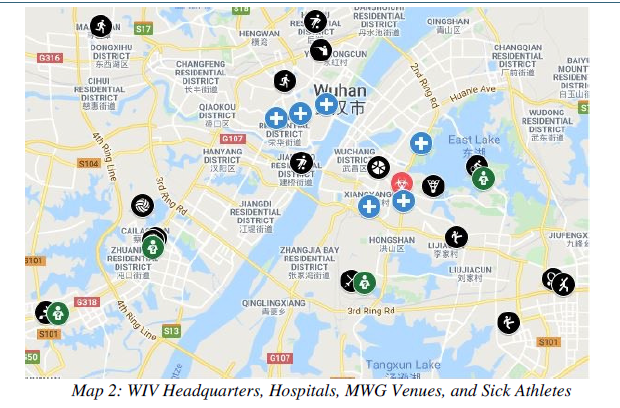 Evidence from Brazil, Italy, France, and Sweden indicate that the virus circulated in those countries by November and December of 2019, long before China officially admitted they had a significant public health problem. This was likely the global “super-spreader event.” China tried to blame Italy for the virus at one point.

China is currently facing a spate of economic challenges. It would be wise to consider the possibility that another round of “global pandemic” is being set up, in which the Chinese have all the medicines and protective equipment.

Such a set-up is probably not the case. However, we are rapidly approaching the 2nd anniversary of “2-weeks to flatten the curve”, so caution is warranted.

One Canadian military officer at the World Military Games in 2019 of Covid is demanding an investigation into the suspicious outbreak of illness there.

The long-serving officer, who cannot be named as he is still in the forces, was among the scores of athletes who fell sick with a debilitating illness after attending the World Military Games in Wuhan in October 2019.

He said foreign competitors found the city of 11 million people ‘like a ghost town’, and so many cases of a mysterious virus afflicted the Canadian team that a quarantine section was set up on their military flight back home.

The officer, who is still suffering from the effects of his illness despite previous high levels of fitness, said a military-appointed doctor later said he almost certainly caught Covid.

Because the Chinese have been so utterly opaque and secretive about their research in Wuhan, skepticism about their motives and responses is prudent in the wake of their current infectious disease control actions.

I feel really bad for the athletes who have devoted their lives to this moment.

Perhaps we could award a gold medal for hanging Fauci, with, silver and bronze going to those who assist the gold medal winner.

This is why I don’t think the Great Wuflu Panic won’t be ending anytime soon. For Communists around the world it has become a religion, not to be questioned by blasphemers and infidels.

These Olympics are going to be a fustercluck for multiple reasons.

COVID?
Or new, improved COVID 2.0?
The tune is modified, but the dance is familiar.

The Olympics? Now wouldn’t that be the perfect time to send the world a bright, shiny new pestilence ? And take out some of their Olympic competition in the process? A two-fer for the CCP !!!

The Chinese vaccine does not work. Even they admitted it has a 25% to 30% protection rate. All they have left is lockdowns. And, they really, really want the Olympics to be held.

More significantly, they just locked down their two biggest industrial provinces and two of their busiest ports. For those of you who believed the supply chain issues were getting better, not anymore. A lot of industrial supply chains just fell off a cliff.

As I recall, the Chinese hosted a military version of the Olympics in the fall of 2019; some athletes from that event had ‘unexplainable’ viral infections shortly thereafter.

The Olympics should be cancelled. China, besides being a genocidal dictatorship, obviously has something else going on besides Omicron.

We don’t need them accidentally releasing another virus into the world through the Olympics like they allegedly did with the military games.