What a shock. CTU doesn’t want to work. 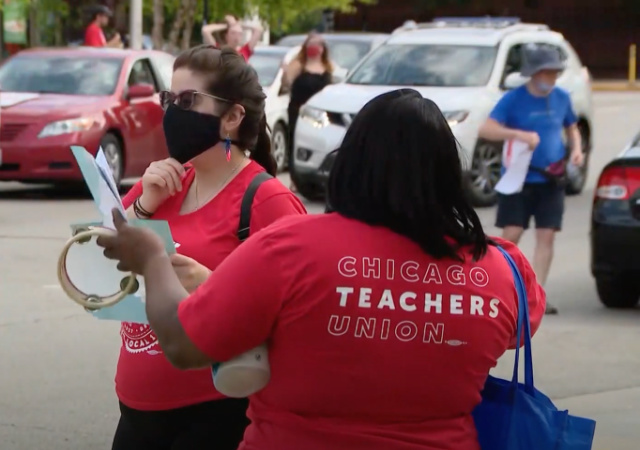 Oh, look. The Chicago Teachers Union (CTU) is playing politics with the students once again. They do not care about the education or well-being of children.

Chicago has seen a spike in the Omicron variant of COVID, which gave the union a perfect excuse to cause trouble again. They used it to vote against in-person learning late Tuesday night.

The rules do not apply to the CTU. Going to remote learning must be cleared by the Chicago Public Health Department.

Chicago Public Schools (CPS) will shut down on Wednesday. The vote left the parents scrambling over what to do with their kids out of school. CPS said children can still get food at the school, and they won’t turn away any kids dropped off.

The CTU issued more demands before coming back from winter break:

CTU and CPS have been negotiating for months for a safety agreement for this school year. In a proposal submitted last week, CTU called for students and staff members to provide a negative COVID-19 test result before entering buildings Monday after their two-week winter break. Short of that, the union asked the district to go virtual for two weeks so additional safety measures could be put in place.

The union said daily health questionnaires should be reinstated; KF94, KN95, or N95 masks should be distributed to all staff and students; and a school should shift to remote learning if 20% or more of staff is in isolation or quarantine or when a school safety committee says a transition is warranted because of infection rates or noncompliance with protocols, among other demands.

Let’s see here. CPS has required indoor masking since the beginning of the school year, along with social distance rules. Unvaccinated teachers must be tested weekly, and those tests are optional for unvaccinated students.

The CTU also wants to bring back the daily health screeners, and CPS CEO Pedro Martinez said those stopped because it took too long.

But Martinez said if a school wants to have a daily health screener, they can bring back the person.

“One of the things I’m hearing the most misinformation about is that Chicago hospitals are filling up with children, that many Chicago children are dying of COVID, that it’s a really scary time to be a child right now with COVID in Chicago,” Arwady said at a Tuesday morning news conference.

Arwady said Tuesday she feels “extremely comfortable” with children learning in person with the mitigations that are in place. Arwady, Martinez and Lightfoot have long emphasized that schools are where kids belong.

Mayor Lori Lightfoot went off on CTU like she did last year, describing the situation as Groundhog Day, the movie where the day repeated for Bill Murray’s character. But it seems like every year, the CTU comes up with some excuse to mess up the schools.

Plus, we all know children have fallen behind after the CTU forced the kids to do remote learning the majority of last year. The lack of school affected a lot of minority students.

Let’s face it. CPS isn’t all that great of a district, to begin with:

“We need to lean in to the science and the data and not push that to the side and give in to fear-mongering and hysteria,” Lightfoot said.

Lightfoot also reiterated that remote learning led to learning loss among Black children, including increases in failure rates for elementary school children. CPS students spent most of the last school year learning at home before the union and the district reached agreement for kids to return to classrooms in waves.

“Why on earth, when we don’t need to pause, would we pause and risk falling back into the same old trap?” Lightfoot said. “Achievement gaps are real and they’re affecting kids of color at an exponential rate.”

A few cities went to remote learning. But the majority of schools across the country, including the rest of Illinois, went back to school.

Are these bums still getting paid to not do their job as contracted? Only a reprehensible whiny cretin would hold kids education hostage over a fabricated psychosis.

Fire every one of them, then hire the private sector folks who were fired or forced out of their livelihood because they refused to get the jab/multiple boosters over a Not-A-Mandate by The Hologram in the Oval Office.

But it’s all for the children, don’tcha know! Fire them and break the union.

Seems a perfect time to cut staff. One instructor can do all the schools.

Exactly. The Union will shift into reverse gear the moment the school says “We have thirty-seven teachers lecturing on Science 1. With remote learning, we’ll take the most effective teacher in that group and have them do the lecture. The other teachers will be released, although they may be hired back on temporary basis at minimum wage to grade tests. Or not.”

Hundreds of unqualified nitwits who have clogged the school for decades will promptly start screaming. The few teachers who actually teach can have their salaries doubled. Win/Win.

Publicly funded education is not the same as public education. IMO, the public (gov’t) schools are growing much closer to having that point rammed home.

We allow college students to receive public funding regardless of which college they attend. Notre Dame? Yeshiva University? No problem. Sure, state public funds generally have to be spent within the state, but that’s fine.

The case for a voucher system for public primary and secondary education has already been made — it works for college students, and it can certainly work for younger students.

The difference, of course, is that most college faculty aren’t unionized.

You don’t have to be unionized when you already own the institution.

In all fairness, Lazy, Overweight people are the group that is dying from the disease. So, I can see why Chicago teachers are alarmed.

In a place like Chicago, most of the kids don’t want to be in class in the first place. Meantime, the Whites, Asians, many or most of the “Hispanics”, and blacks with real jobs, will send their kids to private schools.

Those who can’t afford it will form up teaching pods, or find a way to home school.

The teacher unions need to be broken, and broken to the point they can’t heal.

This echos what I’ve said for years: Starve the beast. DEFUND the SCHOOLS. Fund the student. School choice is a civil right.

Starve the beast? The beast is so fat it could go without eating for the next 100 years.

Except the private schools aren’t “just there” with slots available for all those kids. The government “free” schooling model ensures a high cost of entry and maintenance in this market for commercial competitors. In a lot of places, if you want a private school, you have to start your own. And that means fragmented homeschooling for most people, and for single-parent or two-worker families, that’s often a nonstarter. I wish I could snap my fingers and make private schooling universally available, but I can’t.

You present an either/or problem where there is a solution.

Once the voucher system is in place, the schools will be created and flourish.

The Chicago teachers have been paid for the last 18 months for not teaching in person. Why would they want that to change? It’s a UNION, for goodness sakes. Unions do what unions do.

What’s needed is for Mayor Lightfoot to announce that she’ll support the School Board all the way, to the point of terminating teachers. That will require some substantial political courage, which is exactly why you won’t see her do it.

I live in suburban Chicago. The suburban schools are open. Some are doing hybrid, many are doing live instruction. My suburban neighbors just roll their eyes at Chicago and mutter how happy they are that they, or their parents, moved out of the city.

Yep. Teachers need to be fired over this. I am a teacher. If you are unwilling to go do your job, then you need to be fired. “Virtual” teaching is a nightmare that doesn’t work.

I read where Mayor has warned teachers that don’t show don’t get paid and the buildings are open.
CTU should be ashamed of themselves.

The head of the Chicago Public Schools Teachers Union successfully negotiated over billions of dollars from Biden the last Covid relief package go around. The union knows they can squeeze Biden for more and it’s more dollars they want. The teachers want to stay home and get paid not to work.

These are tried and true Cook County Illinois Democrats; for them enough is never enough.

declare this an illegal strike and give them 24 hours to get back to work AT SCHOOL or be fired. No paychecks. No pensions. No unemployment.

That’s what Ronald Regan would do

So you know that Groot is chomping at the bit to be like him.

Every person on Shitcongo that pays taxes to support the school system there should be asking for a refund, right now.

Hope they all have flights to Bermuda

I hope they all fly to DC like the Texans did.
They could give Kamala and Chucky another dose of the COVID, and bring some cooties back as souvenirs.

Has anyone bothered telling these beached whales that they are at increased risk of “covid” due to their corpulence rather than due to their unfortunate charges?