“I’m convinced this place is better than eight years ago” 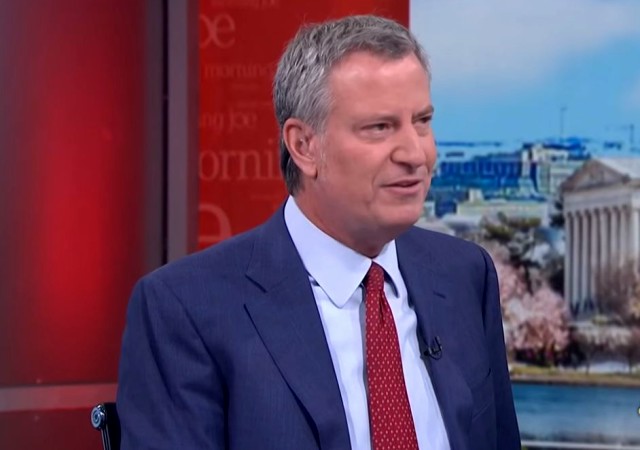 If you’re trying to think of things to be thankful for in the New Year, you’re in luck. New York City Mayor Bill de Blasio is finally on his way out of office.

He has some competition for worst mayor in the country, but I think he takes it because we’re talking about New York City here.

He is already moving out of the mayor’s mansion. CBS News in NY reports:

After Mayor-elect Eric Adams is sworn in early Saturday morning, he’ll have some moving to do.

A spokesperson for Adams says he will be moving into the official mayoral residence on the Upper East Side.

I doubt many New Yorkers will miss him.

It was the honor of his life to destroy NYC 💥 #billdeblasio pic.twitter.com/lFI6mT9eNS

The worst mayor in the history of New York City! He took a 20 year renaissance and threw it all away.

Amazingly, this dunce stands by his record.

De Blasio insists NYC is better off after his 8 years

Mayor Bill de Blasio is insisting that New York City is better off now after his eight years at the helm — even though murder rates are up, street homelessness has surged and the Big Apple’s economic recovery lags amid the pandemic.

“I’m convinced this place is better than eight years ago,” de Blasio told NBC’s “Today” on Thursday as his mayoral tenure nears an end.

“New York is better because of New Yorkers.”

De Blasio, who will be replaced by Mayor-elect Eric Adams at midnight Friday, claimed the Big Apple is now “the safest big city in America” — and that he had successfully fought “inequality” during his time in the top job.

“Independent studies have shown we were able to put a lot more money back in the pockets of working people. Wages have gone up. We’ve been able to give things like pre-K and 3-K to all families for free, universally,” Hizzoner said.

“We have, after a really tough two years, we’re once again turning the corner – this is the safest big city in America. That is a fact.”

We won’t have Bill de Blasio to kick around anymore.

It’s not even a tiny bit of exaggeration to say that DeBlasio is America’s worst mayor. If there is a category for it, he should be listed in the Guiness Book of World Records.

Chicago mayor Lori Lightfoot is bringing up the rear. So is LA mayor Eric Garcetti.

If the last couple years have taught you anything, it’s that you should never underestimate the sheer insanity of committed leftists.

During the past two years, millions of NYC residents obeyed his insane commands without question. I work for a NY Based Company. The people in our NY office were like sheep in a trance – well the Mayor issued orders…so we better follow…

DeBlasio was the worst Mayor in America, but the people of NYC allowed him to rule as a tyrant.

Never vote for a man who changes his name.

Like Ford, Coolidge, Eisenhower, Cleveland, Grant, or Gingrich? What about women who change their names, which most of them do? Why is that different?

I may have found some satisfaction in seeing De Blasio’s ego take a beating during the Dem presidential primary.

That being said, he’s still going to be living off the taxpayer’s dime for the next 6 months because he’s keeping a security detail (albeit a smaller one). Reason? He doesn’t own a car and moving around without one may be dangerous for him because of people who don’t like him. He and the Mrs. are also living in a Marriott while their house is being renovated since it needed work done before they moved back in.

It’s NYC’s problem. And tell them to complain to voting machine company.

I am well aware who is going to be paying for it, as I am also aware of multiple instances of his, quite frankly, abuse of the NYPD’s security detail program during his mayoralty (including his presidential run) for which NYC taxpayers had to shell out hundreds of thousands of dollars.

The kind of damage Di Blasio has done is generational.

Waste is not embezzlement. There is no evidence — or even reason to suppose — that any of that money ended up in her pockets. She threw it down the toilet.

So we win New York City now in your world???

You should stop peddling baseless conspiracy theories from grifters like Sydney Powell and return to planet Earth you could be useful on that planet.

Having a police bodyguard is not “living off the taxpayers’ dime”. He gets no personal benefit from it, because if he hadn’t been mayor he wouldn’t need one, and certainly wouldn’t be paying for one. The same goes for Trump; his secret service protection is not a benefit he enjoys, because he wouldn’t need it if not for his service.

Does anybody here really believe this guy was elected and reelected without voting machine fraud? ANYONE?

Fraud is his middle name.

Put up or shut up Mr. Sydney Powell.

Yes, he was. There is no possible question of it. Not only is there literally no indication of fraud at all, nor any reason to suppose that fraud would be used for him rather than against him, there’s also the fact that none of his elections have been close.

I wish everyone would call him by his birth name, Warren Wilhelm, Jr. He needs to be exposed for what he is, the son of Communist sympathizers.

Read about his entire family – The Wilhelm Uncles were behind the US entry into WW I – they have been Washington Deep Staters for over 100 years.

That’s just stupid. What has his birth name got to do with anything? And how is it more legitimate than the name he chose as an adult? That people to use their fathers’ surnames rather than their mothers’ is simply an English convention; there’s no reason in the world why someone should adhere to it if they don’t feel like it. If he wants to be known by his mother’s name instead, what the hell business is it of yours to object?

He’s no less Italian for having an Italian mother rather than father. And calling him by her name doesn’t cover up his status as a red-diaper baby, because both his parents were red. What makes you think his father was more of a red than his mother?

And that business about his uncles is pure, high-octane insanity and falsehood. Repeating it automatically marks you as an insane person.

That last paragraph is aimed at “Frank Hammond”, not WestRock.

And the new Mayor had to call 911 while commuting the subway hours before he was sworn in.

1. He didn’t have to. He chose to do it, probably as a publicity stunt, or perhaps (to give him the benefit of what little doubt there is) because he genuinely still has a cops’ reflexes and automatically calls in anything he observes.

2. It was hours after he was sworn in. He was sworn in in Times Square, just after the ball dropped. This happened on his morning journey to City Hall. He caught the subway from his home in Brooklyn, because he hadn’t yet moved in to Gracie Mansion. He did that later in the day.

People generally elect the politicians they deserve. If the residents of New York were stupid enough to elect DiBlasio, then they deserve the destruction of their city that has resulted.

Remember, New Yorkers also elected AOC, whose singular accomplishment has been to drive away good-paying jobs. Neither of these elected officials speaks well of New Yorkers. In fact, the most intelligent of them are fleeing to Florida and Texas.

DiBlasio should team up with Whitler from Michigan and create their own little Venezuelan republic. I wonder if North Korea would accept them.

They are too extreme for North Korea.

Deblasio can take solace, it took the peanut farmer years ’til the Kenyan became the worst President. It may take a while, but someone will be worse. Pity the poor city’s citizens.

He won reelection. Bad as he is, the voters are worse.

The wisdom of Alexandra Cortez, the attitude of Michelle Obama, the dishonesty of Hillary Clinton combined, the laziness of Barack Obama and the incompetence of Lori Lightfoot: he’s got it all.