All Monkeys Accounted for Following Escape After Truck Crash in Pennsylvania

All Monkeys Accounted for Following Escape After Truck Crash in Pennsylvania

An eyewitness to the event, who tried to pet a monkey, was told by the CDC to monitor herself for any cold-like symptoms. 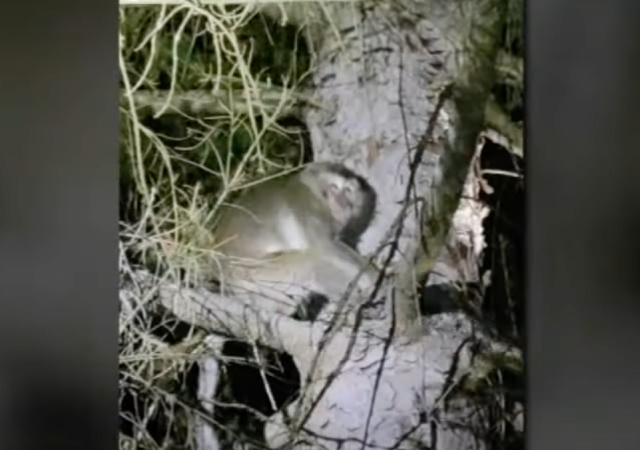 After two years of pandemic response, likely caused by a release of a genetically modified bat virus from China’s Wuhan Institute of Virology, there was a great deal of nervousness about the escape of monkeys used in biological research following a truck crash in Pennsylvania.

The Pennsylvania State Police said that a pickup truck with an enclosed trailer full of 100 monkeys had collided with a dump truck and that four of the monkeys had escaped.

The cynomolgus monkeys, which are often used in scientific research and can cost up to $10,000 each, had been on their way to a lab in Florida when the crash happened at about 3:20 p.m. on Route 54 near Interstate 80 in Montour County, about 150 miles northwest of Philadelphia, the State Police said.

No people were hurt, but troopers and state wildlife officials responded as the search for the monkeys intensified into the evening hours. A State Police helicopter was also put on standby but had not been deployed for aerial reconnaissance, Trooper Lauren Lesher, a State Police spokeswoman, said.

I hope this isn’t gonna turn out to be the plot in that bad movie where the scientists know the lone animal missing has a lab created virus that can wipe out the world’s population.

However, all monkeys have now been accounted for after a weekend full of monkey business.

Several monkeys had escaped following Friday’s collision, Pennsylvania State Police said. But only one had remained unaccounted for as of Saturday morning, prompting the Pennsylvania Game Commission and other agencies to launch a search for it amid frigid weather.

Kristen Nordlund, a spokesperson with the federal Centers for Disease Control and Prevention, said in an email Saturday evening that all 100 of the cynomolgus macaque monkeys had since been accounted for.

According to the Centers for Disease Control and Prevention (CDC) spokesperson, the monkeys were en route to a CDC-approved quarantine facility. They had arrived Friday morning in New York and are originally from Mauritius, a country in East Africa.

Sadly, three of the animals were euthanized. An eyewitness to the event, who checked on the response and tried to pet a monkey, was told by the Centers for Disease Control and Prevention (CDC)  to monitor herself for any cold-like symptoms.

“Little monkeys, we got bears, we have coyotes, we have deer, you know all the time. A little 3-pound monkey doesn’t scare me, but why are they so concerned about it is what concerns me,” said Howie Lerch, Valley Township.

Friday night Newswatch 16 spoke with Michelle Fallon of Danville, who saw the entire accident. She jumped into action; helping both drivers and the loads they were carrying.

“I walk up back on the hill and this guy tells me, ‘Oh, he’s hauling cats. I said, ‘oh.’ So I go over to look in the crate and there’s this green cloth over it. So I peel it back, I stick my finger in there and go ‘kitty, kitty.’ It pops its head up and it’s a monkey,” Fallon said.

Fallon was contacted Saturday by the CDC and was told to monitor herself for any cold-like symptoms.

She shared the letter from the CDC with Newswatch 16; it reads in part that, “the surviving monkeys will be quarantined and will be monitored for infectious diseases for at least 31 days before their release.”

I hope there is nothing more to the CDC’s guidance to the eyewitness other than prudent practice after contact with a non-native animal.

Why do we still need to do research on these animals?

Um, if we want to find out anything, that’s how we can do it.

This is woke nonsense. This is where wokeness starts. Weakening a practice that works well, and diverting resources into finding alternatives that are more expensive and less effective, for no other reason than that the original practice is not politically correct.

Yeah, like how to create the Planet of the Apes.

UPDATE: Pennsylvania Woman Who Came in Contact with CDC Monkeys After Crash Is Experiencing Cold-Like Symptoms, Pink-Eye and a Cough.
Because of course.

Let’s hope they got Rochelle Walensky back in the truck without any trouble.

At first glance I thought you said something about the presence escaped monkeys on the Supreme Court.

I think there are at least two.

Thank fuck there wasn’t a tank museum or nuclear power plant near by! Really dodged a bullet there! 🤣🤣

So there are no more monkeys jumping on the bed. Thank goodness.

Yes, but while they were loose, a jewelry store in the neighborhood was looted.

But nobody seen nothin, heard nothin, or said nothin.

If you have come in contact with an escaped simian, please notify us if you start to experience a cough or cold. Or.. you start to bleed from your ears.

Mauritius, a country in East Africa.

WTH? Since when is Mauritius in East Africa, or anywhere in Africa? It’s 2000 km out in the Indian Ocean!

Since we started living in the Democrat’s “Fact Based” world.

A quick look at an internet dictionary.

Milhouse… Americans tend to be really awful at geography. Right you are, they didn’t come from Africa.

What previously unknown COVID variant were they infected with? Why else would CDC personnel be concerned about cold-like symptoms in those who may have come into contact with them? I don’t buy the “non-native animal” angle. Why were infected primates being transported anywhere?

Now betting the CDC knows EXACTLY what these monkeys were infected with, and it might be bad enough for them to forego “biohazard” markings on the truck to make sure there was no opposition to the monkeys’ transportation through who knows how many municipalities. They probably reckoned it would be better to sneak the monkeys through than to label the truck and have to lie about the monkeys’ condition and the threat they might pose to the public. Too many “conspiracy theories” have come true lately to discount this scenario.

I don’t trust any of these bastards farther than I can throw them (or their monkeys).

Ze monkeys are all accounted for.
Now is ze time on Sprockets when we dance.

Monkeys will eat your face.

And if there’s 12 of them, they’ll wipe out humanity. Just ask Bruce Willis.

More fake news: all the monkeys were NOT caught.

The truck was owned and driven by George Soros.
The monkeys in the back were future district attorneys.

The truck’s door has a decal on it that says:
“WUHAN Delivery Service”

What could that mean?

Bat soup for everyone!

Thank goodness all were retrieved! I mean, it would be absolutely unthinkable to ponder the idea that animals infected by any nation’s government could cause a global pandemic that would result in the deaths of close to one million Americans, and more, globally. Then watch in even more horror as these same governments treated their citizens like a social science experiment. Wait…what’s that dear? Oh! Nevermind.

All were “accounted for”. That doesn’t necessarily mean they were retrieved.
They could be known to be dead and not easily recoverable.
They could have fallen in a river and presumed to have drowned.
“Accounted for” just means someone did paperwork and the numbers added up to the right number. The story mentioned “surviving monkeys” but gave no numbers. Based on the story, some could have been “shot trying to escape”, which is how a certain European used to account for some dead prisoners.

Sorry Leslie. They did NOT capture all of the critters.

One made it to the WH and now operates the teleprompter for Brandon.

I have two takeaways from this article.

1.) Why are we importing monkeys from a small island off of the coast of Africa in the middle of the coof-19 pandemic? Perhaps we are bored with the coof-19, and need some ebola up in the mix? Perhaps with a nipha chaser.

2.) Why is this dumbass sticking her fingers anywhere near that wild animal? I guess she has never heard of rabies. You will most certainly want to take those vaccines before you turn into a zombie and die if that animal is sick.

To be fair to the lady, she thought they were cats. You probably wouldn’t get rabies from transported cats.

1. Ebola is from the Congo. Mauritius is 2000 km into the Indian Ocean. Even if for some weird reason you consider it part of Africa, it’s more than 2,500 miles from the Ebola River, half of that over ocean.

2. She was told they were cats.

In fairness to the driver when he was told he was transporting macaques, he heard “my cats”.

Umm, why should I believe all monkeys have been captured?

“an enclosed trailer full of 100 monkeys had collided with a dump truck and that four of the monkeys had escaped.”

Only eight more to go.

(The TV series was more interesting, but the movie’s music was way superior. So few accordions, so much time.)

“…the movie’s music was way superior.”

That’s cause they don’t monkey around.

Hope these monkeys aren’t being forced by Dr. Fauci into being trans monkeys.

Upon being captured, instead of requesting a lawyer, they asked for two cases of bananas.

This reminds me of the zoo incident several years ago when someone forgot to lock the door of the monkey cage. They escaped and made their way to the maintenance building. They wound up breaking several glass jugs containing hazardous chemicals which resulted in an explosion.

The zoo made the most of it the next day by offering visitors free Rhesus Pieces.

Wife: “I saw a baby monkey on the way to work this morning.”

Husband: “How did you know?”

Husband: Well, was he carrying a baby briefcase or something?”