Meanwhile, 1-million expired COVID tests sitting in a Florida warehouse get FDA approval for use. 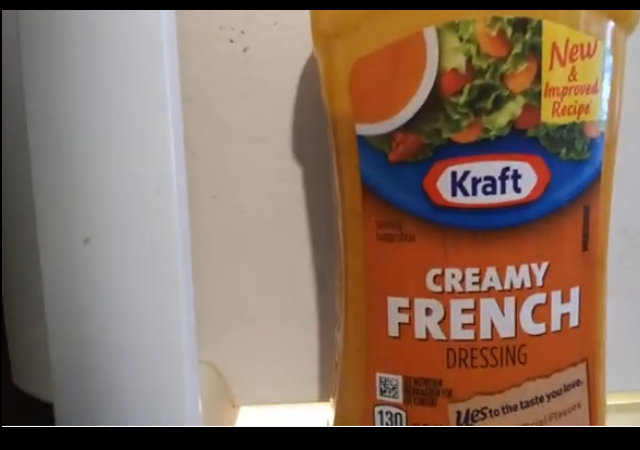 During the era of President Donald Trump, thousands of regulations were rolled back in many of the various agencies that have been merrily promulgating rules with no apparent stopping point.

When Biden took office, he reversed course…and is currently reaping the consequences.

However, in an intriguing move, the Food and Drug Administration (FDA) has taken a break from all its Covid-meddling to rescind regulations over French dressing.

Since 1950, the federal government has defined French dressing by a rigid set of standards that it had said would protect consumers from “economic adulteration,” or food fraud, and reflect their expectations about food.

Distinguished by its reddish-orange color and sweet taste, French dressing had been required to contain at least 35 percent vegetable oil, in addition to an acid, such as vinegar or lemon or lime juice.

But an industry group contended that the regulations were, well, passé. The standards, it said, hampered the ability of food companies to tweak their recipes to meet changing tastes and dietary needs. The group wondered: Why should French dressing be bound by regulations when most other dressings are not?

The Association of Dresses and Sauces (ADS) has been working on the issue for the last….23 years.

“Revoking the standard will allow for greater innovation and more flexibility of products on the market,” the FDA’s statement read.

The battle for deregulation started on Jan. 13, 1998 when the ADS first filed a petition. The ADS argued regulating the exact ingredients and products that create French dressing was “unfair” and halted innovation in the product.

“Revocation of the standard of identity for French dressing could provide greater flexibility in the product’s manufacture, consistent with comparable, non-standardized foods available in the marketplace,” ADS’s petition stated.

Meanwhile, the FDA has approved using the one million Covid tests sitting in a Floria warehouse after passing their expiration dates.

Florida officials confirmed last week that between 800,000 and 1 million COVID tests had expired in a warehouse just before the New Year due to “low demand.” On January 7, the Food and Drug Administration issued a letter to Abbott Diagnostics, which produced the tests, saying they have extended the shelf-life for those tests and that they can still be used.

The Florida Department of Health provided the letter from the FDA to CBS News, in which the agency says that the thousands of BinaxNOW COVID-19 Ag Card tests can be used until March. The extension, the FDA said, is based on the results of Abbott’s ongoing stability studies.

The tests, according to Florida Department of Health Press Secretary Jeremy Redfern, are pre-packaged kits that have to be administered by “trained individuals,” and are not designed for individual use.

These two items are great examples of our government agencies no longer being effective at their core missions.

Meanwhile, check out this 1977 commercial for Kraft French Dressing….and imagine what would happen if it were made today.

“Meanwhile, the FDA has approved using the one million Covid tests sitting in a Floria warehouse after passing their expiration dates.”

Meh. Why the hell would I want to be tested for a virus that has a 99.7% survival rate – even with vastly inflated “death” numbers? Oh, and if I’m asymptomatic I don’t need to do anything. And if I’m symptomatic the only real problem is comorbidies I may have, like being fat, diabetic or having lung issues.

While I completely sympathize, at the same time I do like my Pure Food and Drug laws. I think the answer is to limit their authority; trade groups should be deciding what constitutes French dressing while the FDA assures us the ingredients have met their standards of purity. And Abbott should be asked for studies showing their tests kits are still effective after their (probably arbitrary) expiration date.

You’re going to have to go a whole farther than “limit their authority.” See the whole Oxycodone mess that the FDA fundamentally worked with the Sackler family to create. The Sacklers, with the blessing of the FDA, became a drug cartel that the Mexicans could only dream about.

Thanks to a federal judge disallowing the family BK protection from lawsuits it looks like they will finally pay a financial price. With any luck, they’ll all be homeless and dumpster diving for dinner, but that’s not nearly a fair price, or a just price, for the damage they caused. They should all be doing life-without-parole in a supermax prison. 23 hours per day lockdown.

Always been a Catalina man myself = as an accent to bleu cheese dressing. This deregulation opens up a potential multiverse of madness…

There was once a Catalina dressing with blue cheese bits called Chunky Cheese; it was my favorite!

Those expired Covid tests will show a positive for any bit of viral load. In other words, they are already positive. It’s a shell game in reverse….move the pea

But Biden needs every test kit he can find so he can meet the 500-million goal. Don’t deny him another million positives.

On other note – anyone tracking this new rule that insurance companies will now have to cover EIGHT tests PER person, per MONTH.

The at-home test sells at Walgreen for 23.99

Now I can get it done every 4 days, not just me, but all four members of the family.

Yeah – tens of millions of dollars PER day – and we expect this to do nothing to insurance rates?

On side note – I work the Medicare side of the market. Couldn’t help but notice this x8 per month does not apply to Medicare. Wonder why (LOL)

So now Marmite can be marketed as French salad dressing. I don’t like where this is going.

No, it just means that the various manufacturers can put more crap in the dressing and make it taste half as good as it used to. They will label the package, “improved”.

Oh sure, that’s how it starts. The was an old burlesque skit where a comedian would hold up and axe and declare:

“I am now holding in my hand the very axe the George Washington used to chop down his father’s cherry tree.”

Then after rolling it over and inspecting he would add:

“Of course, the handle has been replaced a few times.”

And finally after further inspection:

“And so has the axe head. But it occupies the same space!”

That’s how it works with these things. Those sneaky Brits just won’t leave us alone about their beloved Marmite.

Slip a dose of ivermectin in there and you have a gold mine!

Why should French dressing be bound by regulations when most other dressings are not?

Since the government is in the business of recipe making, maybe they can tell us whether pineapple belongs in pizza, or if salami belongs in Cuban sandwich.

Or maybe they can get the heck out of recipe making.

Come, come now. They have ruled that a hot dog is indeed a sandwich, and now the science is settled! You do believe the science… don’t you? Don’t you?

But that a burrito is not.

How do you feel about ketchup on hot dogs?

Come on, man.
Okay, a burrito is not a sandwich, but aren’t burritos usually covered in a sauce?
Now tacos, that seems like a sandwich to me.

Absolutely not! But mayo on burgers is fine.

Good news! We can make our own French dressing without a cloth mask!!

Can you? Are you sure?

Nope. I took the mask off, and I still couldn’t.

This may lead to dancing.

Vile madness to rival MacBeth’s own.

For awhile in my life was a French dressing user but some years ago started only using Italian.

Right before they swing on a gallows, Biden, Obama, Clinton, Pelosi, Schumer and the like should forced to drink a bottle of it.

I cannot imagine the benefit to consumers of eliminating standards for French dressing. You want innovation? Great, create a new dressing. Just don’t call it French, which it won’t be. I spent a long career in food sales, actually starting with Kraft Foods. As such, I had extensive training in various food groups, including salad dressings. Labels are confusing enough for consumers without just junking all standards.

Should we call it Freedom dressing instead?

By the way, you can just take all of this crap dressing and file it under “Not Ranch” for us Southerners.

Sugar belongs in your tea, not in your dressing.

How did we ever do without this shining example of government efficiency and regulatory excellent? I really can’t imagine what the world would be like without it.

Let me circle back on that.

There are parts of the world, and this part of Texas is one of them, where mayo is put on hamburgers.
Also lots of bacon and onion rings and other things my cardiologist encourages me to skip.

How many times have the French surrendered in the past 70 years?

I bet that Thereeeeezzzzzza Heinz-Kerry is involved in the story, somehow, or another.

After the invention of Catalina, French dressing became irrelevant. BTW, if you are making homemade Thousand Island, homemade is best, a dash of Catalina pumps it up.

Everywhere I look, there are the Leftists trying to control, everything, all the time. They know how to live your life better than you.

Responsive federal government, moving at the speed of a geriatric, arthritic snail, on a glacier.

There’s an Association of Dresses and Sauces?

I know I speak for the majority when I say “who even KNEW there was a salad dressing lobbying group”?? Thank God this controversy has been resolved and our Government resources can be used to great good! I don’t know about the rest of you, but when I get a salad with THOUSAND ISLANDS dressing – I just don’t SEE those THOUSAND little ISLANDS! Who is in charge of this???