2022 Roars Into Colorado with Massive Wildfires

2022 Roars Into Colorado with Massive Wildfires

Downed powerlines suspected in blazes that have forced the evacuation of tens of thousands. 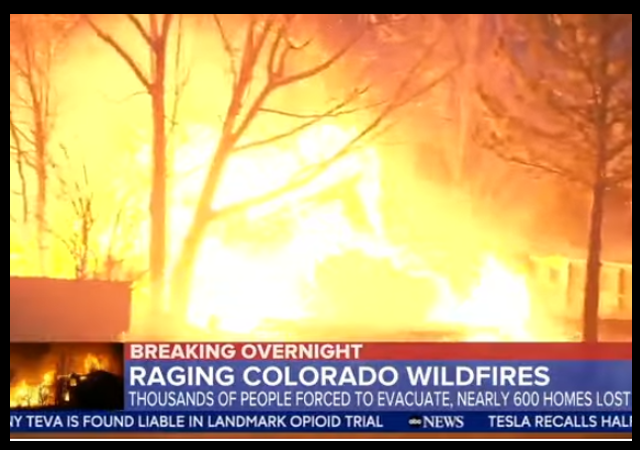 As 2022 begins, Colorado firefighters are battling massive wildfires that has forced the evacuation of tens of thousands of people and destroyed nearly 1,000 homes.

The fast-moving blazes are burning in Boulder County, north of Denver. Governor Jared Polis called it a “New Year’s Eve miracle” that no deaths had been reported.

Some 30,000 people in the towns of Louisville and Superior were told to leave their homes on Thursday.

A state of emergency has been declared.

“It was in blink of an eye. This was a disaster in fast motion, all in the course of half a day,” Governor Polis said in a news conference on Friday.

Winds of up to 105 mph (169 km/h) are fanning flames across the region amid a historic drought.

The cause of the fires is still being investigated by officials. However,h early reports indicate that they may have been sparked by downed power lines.

Officials say that downed power lines are the expected origin for the wildfires that erupted in the Boulder, Colorado area on Thursday, but that the investigation is ongoing pic.twitter.com/ZRN8tVfZoU

Weather forecasters indicate that a major storm developing over the middle of the nation might aid firefighting efforts.

“Moisture that arrives in the area into the weekend can help to give firefighters an upper hand as they continue to battle the blaze,” AccuWeather Meteorologist Mary Gilbert said.

Forecasters say it will be cold enough for all snow to fall in the area with 6 inches or more of accumulation possible. This amount of snowfall should help to extinguish most, if not all of the region’s active blazes.

Colorado had the three largest wildfires in its history in the summer of 2020. But those fires burned federally owned forests and land, while the winter fires destroyed suburban developments and shopping plazas.

“It wasn’t a wildfire in the forest, it was a suburban and urban fire,” said Mr. Polis, a Democrat who lives in Boulder County. “The Costco we all shop at, the Target we buy our kids’ clothes at — all damaged.”

Prayers for the good people of Colorado impacted by the fire, for their safety and a speedy recovery from the disaster.

Last time I was in CO there was a visible line that showed healthy forests on private land and dying forests on government land.

When I was at Colo State, my friend in forestry used to point to the forest and say, “That forest is going to burn. We can’t keep that from happening. But if we’re smart, we’ll decide the best time for it to burn.” Then they try to schedule controlled burns in the wet season with little wind, so it is easily controlled.

But the greenies and the EPA manage to block nearly all of the controlled burns, because the burns will create smoke and burn the snags the spotted owls nest in. Eventually, the forest burns on its own, generally when it’s dry and windy, and the fire is uncontrollable. The resulting wildfire generates 100X as much smoke, and burns up houses and valuable old timber.

Californians went to Colorado and the stupidity followed.

The power line line is as of now is FALSE. See: https://www.boulderoem.com/fire-investigation-is-continuing

It wasn’t powerlines, it was a shed that caught on fire (see video).

You have to have lived along that section of the Front Range to understand the power of those Chinook winds when they come down Coal Creek Canyon and go over Rocky Flats. It blows cars into the ditches, particularly when it snows. Basically, what happened was there was no snow on the ground, yet, and the Chinooks came and someone’s shed caught on fire. That area is essentially prairies and a super-strong wind fanned the fire into an old-fashioned prairie fire. I’m surprised it hasn’t happened more often: the determining factor was that there was no snow by the time the Chinook wind came.

I live nearby. The authorities are now saying that it may have been arson. No details so far.