“You are literally trapped, in a box, on your decking, with fences all around you, cameras everywhere. It’s just astounding. You’re literally treated like a prisoner in there.” 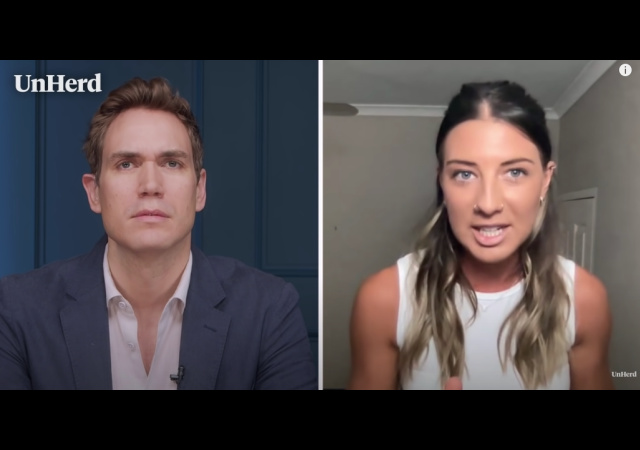 I blogged yesterday about the COVID internment camps in Australia. The news report alone would horrify anyone but now we have a first-person account.

Freddie Sayers interviewed Hayley Hodgson, 26, who moved to Darwin in the Northern Territory to escape the Melbourne lockdown.

Hayley is home after her 14-day lockup in the camp because she had a friend who tested positive for COVID:

They asked if she had done a Covid test, and in the moment she lied and said she had, when she in fact had not yet. This set in train an extraordinary series of events.

“So then the police officers blocked my driveway,” she says. “I walked out and I said, “what’s going on, are you guys testing me for COVID? What’s happening?” They said, “no, you’re getting taken away. And you have no choice. You’re going to Howard Springs. You either come with us now, and we’ll put you in the back of the divvy van. Or you can have a choice to get a ‘COVID cab’… I just said, “I don’t consent to this. I don’t understand why I can’t just self-isolate at home, like a lot of other people are doing.” And they just said, “we’ve just been told from higher up where to take you. And that’s all that there is.” 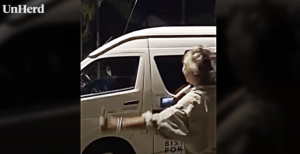 Sayers asked Hayley how the authorities knew to investigate her: “I have a scooter and they ran my number plates. And they ran the number plates and saw the footage that I was with a person who had tested positive. And that’s how they knocked on my door and knew where I loved, from running my number plate.”

How scary is that!? Goodness. Hayley also said the CDC told her that her 14-day imprisonment was a punishment for lying to the police about taking a COVID test. Out of the 10 close contacts of the infected person, only Hayley went to the camp.

The police forced Hayley to pack a bag and told her housemates that once she tests negative she could come home. Unfortunately, that did not happen.

Hayley had to stay there for 14 days even if every test came back negative. They tested her three times. Hayley never tested positive.

Hayley described life in prison: “You literally get put on the back of a golf buggy with your bags. And these people are in hazmat suits and everything. They don’t want to come near you because they think you’re infectious. And they literally drop you to your room. And they leave you. They don’t come and say anything, they don’t check-up, they don’t do anything. You get delivered your meals once a day. And you are just left.”

Sayers asked if the people inside the camps could communicate with each other: “We can, but we’re only allowed to stay in our designated areas. Which is nothing, maybe two metres. We have a deck that we’re allowed to go out, and maybe get a little bit of sunlight, but that is it. If you get caught off your decking without a mask on or anything, you get a $5,000 fine.”

The authorities caught Hayley off her deck, but she did not get the $5,000 fine. They gave her a warning.

Hayley sent UnHerd footage of the authorities disciplining her because she did not wear a mask when she put trash in the container. She said she has a medical condition that exempts her from wearing a mask.

The crew threatened her with a $5,000 fine if she crosses the yellow line without a mask. 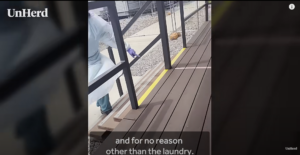 At one point they offered Hayley some Valium to calm her down because the confinement made her distressed:

I said, “Can you just please let me out for a walk or a run? I’m in this little box and I can’t move. I’m anxious, I’m feeling not well, I need to get out.” And they said, “We’ve got a doctor calling you, and we’ll get some Valium prescribed to you, you can call us anytime you like, and you can have Valium.”

Sayers asked Hayley how it felt to have people in control of her every movement. I’m pretty sure you already know the answer:

Oh, it’s horrible. It’s a horrible feeling. You feel like you’re in prison. You feel like you’ve done something wrong, it’s inhumane what they’re doing. You are so small, they just overpower you. And you’re literally nothing. It’s like “you do what we say, or you’re in trouble, we’ll lock you up for longer.” Yeah, they were even threatening me that if I was to do this again, “we will extend your time in here.”

Hayley’s imprisonment cost her her job: “I was just working in a retail store. Obviously casual, you don’t get paid any sick leave or being away from your job. So I wasn’t getting paid or anything whilst I was being in there. They compensated me, I think, $1,500 for the two weeks. And that was all.”

The Australian press acts like camps are happy camps! You’re on vacation! Hayley disagrees: “You are literally trapped, in a box, on your decking, with fences all around you, cameras everywhere. It’s just astounding. You’re literally treated like a prisoner in there.”

Crickets from the American press.
I think they deserve some internment of their own.
A happy camp, of course.
It would make me happy, at least.

Internment would be good for them. Make them listen to Tucker Carlson 24/7.

Main take away: Never give up your guns.

She seems to be confused. The reason inmates in the camps are “literally treated like” they are prisoners is because they are literally prisoners.

Welcome to the police state.

When the soviets did their rounds ups… famous last words were “Not me!!! This must be some sort of mistake, I’ve done nothing wrong.”

Give me the civilian, I’ll give you the COVID mandate crime.

If only Stalin knew about this!

You can bet that Scott Morrison [the Aussie Prime Minister] DOES know about this and does not care.

As I understand it [and I am not Aussie and would appreciate it if any Aussie commenters would weigh in] under the Aussie Constitution supposedly the Parliament and Prime Minister cannot violate the Constitution and their acts if they do are supposed to be void. I don’t know if they have judicial review like we do, or if anybody can hold them to it.

Given human nature, and the fact that camps are expensive and cause bad publicity for those in power; I would not be surprised if people started just disappearing permanently after being arrested by the Aussie equivalent of the SS-Totenkopfverbände.

The fact that the Aussie population, government, military, and police are willing to do this teaches us a lot about what they are and what kind of people that they are.

Not our friends, not our allies. Maybe allies of our current regime though.

The answer of the PM and Parliament is they have nothing to do with this, there is no Federal program involved. This is all on the states (they would say) as the PM and Parliament do nothing to stop those states which are abusing their citizens. And, from what I have read, not all states in Oz are involved with most (all?) the Western states not having lockdowns, etc.

Sehr interressantes. So Australian states are free to violate the rights of Australian citizens, with no pushback from the Australian Federal government? It is good to know what the rules are. However noting that there is no serious resistance from the Australian people, which makes it perfectly safe for the tyrants.

I have done nothing wrong yet, but when that knock comes at the door, I aim to misbehave.

This is EXACTLY what happens when the civilians are out of ammo….and since they voted away both their guns AND ammo it was pretty ding dang easy to slide into a fascist dystopian hell hole state of affairs.

Easy and certain based on history.

“interviewed Hayley Hodgson, 26, who moved to Darwin in the Northern Territory”

That’s saying something when you realize that Darwin is the salt water crocodile capitol of the world.

my husband has a brother in Wellington with his wife and kids; and a sister in Alice Springs with her hubby and kids…. Weird things happening.

I understand wanting to escape Melbourne, but moving to a city that has a covid concentration camp is surely the worst possible choice of destination.

It’s past time for all of us to ask ourselves where the red line is. For me, this is appalling. Taking citizens to “camps “? but I’m sure there will be plenty who would do this. I will not. I think it would be our duty to actively resist this.

And no prisoners can have guns, either.

That’s how you can tell they’re prisoners.

“From my cold, dead hands.”
This is a hill that I will die on.

Though as Patton said, better to make the other bastard die. You need to live on to form our newe nation, separate from the left and its critters we leave behind.

And they just said, “we’ve just been told from higher up where to take you. And that’s all that there is.”

That sounds like it could be a quotation from the Nuremberg trial transcript. I bet these Aussie cops think that their day will not arrive.

A thought not without reason. I give you a certain Capitol PD Lieutenant as an example in this country. Unless you think he actually will ever be charged with even spitting on the sidewalk, much less his execution of Ashli Babbitt.

We all need to do our part to fight this. I for one would submit to being locked in that little room with Hayley for two weeks.

So far the US is looking good. Maybe she should come over here.

Don’t let them take our guns. That is the lone, thin reed keeping us from being washed downstream by the flood of Facism.

“we’ve just been told from higher up where to take you. And that’s all that there is.”

IOW, “just following orders”. But there’s no one to convene another Nuremberg. We don’t have Axis v Allies now, the whole world’s powers-that-be are allied as one against their citizens.

Poor girl. Maybe some more time in the Joycamp, will help her get her goodthink on. Big brother is watching her.

Already being done, This from the Brit paper the SUN:

A pregnant Aussie woman from near Ballarat, Victoria, who made a Facebook post [creating what is called on Facebook a “Freedom Page”] supporting an anti-COVID lockdown demonstration was arrested in front of her partner and children for the crime of “incitement”. Apparently she is the fourth person to be arrested and so charged in the last few days.

Australia is no longer a free country, and the Democrats are looking on with envy.

It’s all happening so fast. Hopefully people are waking up fast enough.