“And you know what I’ll do? I’ll call the police and make an allegation. And we’ll see how that works with you.” 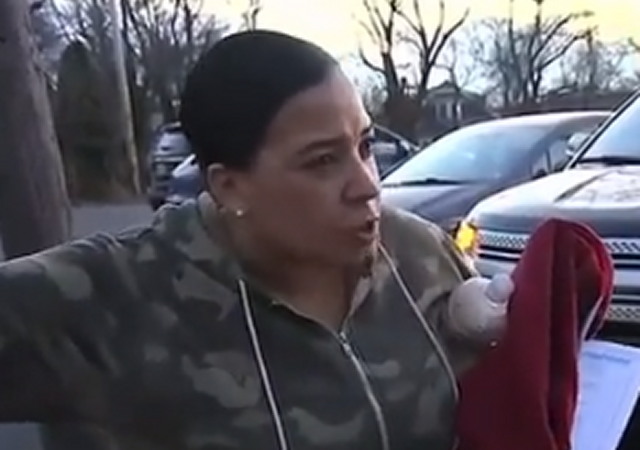 The new Massachusetts U.S. Attorney Rachael Rollins is a woman of the far left, who fits in perfectly with Elizabeth Warren and Ayanna Pressley, both of whom supported her candidacy.

In January, she was approached by reporters who just wanted to ask her some questions, but she acted like she was being ambushed and threatened to call the police on them.

In the video from January 2021, Rollins accused journalists of risking the lives of her children after a reporter requested an interview near her home, video shows. The film crew, who work for Fox-affiliate Boston 25 News, asked Rollins if she would be willing to answer questions. Rollins, who became visibly upset, demanded to know how the reporters knew where she lived, to which they informed her it is a matter of public record.

“So as a Black woman, in this moment in this country, you’re going to put my f—ing house on screen?” Rollins asked the reporter. At no point in the video is Rollins’ house shown.

“No, no, no, ma’am, we’re just here approaching you to ask you a question,” the reporter replied, according to the video.

“Get away from my family. Speak to me at my job. If I get hurt or harmed because of this, you are on the record for that, or my kids are f—ing killed,” Rollins told the journalists in the parking lot near her house. “Who do you think you are? This is private property. Get out of here!”…

She seems nice. She was confirmed this week. Tom Cotton and Ted Cruz raised serious objections to her confirmation. The Senate vote was 50/50 so Kamala Harris was brought in to break the tie.

Tom Cotton called her a ‘Soros prosecutor’ during an interview with Tammy Bruce:

Our country is facing a crime wave and Democrats are fighting to confirm pro-criminal prosecutors like Rachael Rollins.

They will be responsible for the disaster that ensues. pic.twitter.com/DEyJsgdI1c

Crimes that Rachael Rollins—Biden nominee to be US Attorney in Massachusetts—doesn’t want to prosecute:

Tucker Carlson did a segment on Rollins this week in which he described an incident that led to the above clip of her with the reporters. It was basically a road rage confrontation between Rollins and another woman, which Rollins made about race. He also showed a segment from an apppearance Rollins made on his show a few years ago. Watch the whole thing:

This woman really has no buisness being a federal prosecutor, which is exactly why the left loves her.

One unintended consequence is that the dramatic increase in crime is happening in dark blue cities, and the “victims” are the people who voted for this stuff to happen. Blood in the streets, especially in high-end, gated neighborhoods is not necessarily a bad thing.

The consequences are intended.

She sure has a mouth on her…

It has to be the same size as her ass or she would tip over backwards.

Is that you, Hank?

This is a serious thing: this woman is a lying psychopath.

Oh, I fully understand that. That is a “given”. What I was making reference to was her ghetto mouth.

Now that’s something ya don’t see everyday. Loudmouth, overweight, aggressive, black female with gutter communicating skills and no styling either in dress or coiffure. Probably safe to assume there’s an assembly of ugly tats under the ugly clothing.

And, ugly HATS in her wardrobe?

And an ugly psyche in her Frankenstein brain.

Congresswoman Sparkle Hat in Florida could fix that for her

Democrats own her and those like her. They are responsible for the rise in crime she will allow.

And the non-crime she will prosecute instead.

Hang on Massachusetts citizens – things are about to get scary!

Leave as soon as possible and move to Texas.

Don’t move to Texas or Arizona or Florida. Very hot, lots of snakes and everybody carries a gun. Move to Chicago. Lots of culture and so long as you’re white, pretty much no crime. Yet.

Yes and Subway is open at 3 AM even on the coldest mornings..

And the c-stores sell bleach at those hours as well.

For that late night craving of a Tuna Sub while on the way for eggs at the local drugstore.

Yes. Move. Anywhere but Northeast Tennessee. Or Tennessee at all. No Mass-holes.

Memphis would probably be okay. Especially Downtown Memphis. After dark.

Those Mass-holes sure ruined my home state of VT. and NH…and ME

For the Love of Light STOP telling people to move to Florida! We are overcrowded already and we don’t want you here!

Well, the Laundries left. That ought to count for something.

Trying their damndest to provoke a self-defense incident to set precedent to take our guns, but leave them with criminals.

If I lived in Massachusetts I would hop on my scooter and get the heck outa there. ASAP.

Did that 20 years ago, screamed “Adios MFs” all the way down the Pike. Got 20 years of way better life out of it. Probably too late for Bay Staters to benefit from that now. Like deciding how neat life in Cuba would be… in 1958.

It’s a shame. It was such a great state at one time,

They are. They are heading to NH. The commute down Rt 3 and I 93 are epic.

This vile crone is performing an unintentional public service, by perfectly distilling, encapsulating and displaying the worst, most odious and most cancerous personality traits/flaws of contemporary Dhimmi-crats — pathological narcissism, self-entitlement, rudeness, obnoxiousness, imperial arrogance, a totalitarian ethos (“I’ll call the police and make an allegation. And we’ll see how that works with you!) and, naturally — so tiresomely predictable in its invocation — contrived, fallacious and utterly hollow racial grievance/victimhood posturing.

This crone is so utterly insane, she makes crone-harlot, Harris, appear to be the model of personal warmth and civility.

You left out my favorite, Mendacious!

Some internet savvy folks promptly when to work and published her address, all of her phone numbers, email address(es), children’s names, etc, in the interest of disseminating public information.

As it were, no one really wants to know where she lives or anything else about her so much as just getting rid of her.

Kamala Harris did this to Massachusetts.

That makes no sense at all. Massachusetts was well down this rabbit hole before anyone had ever heard of Kamala Harris.
I, for one, welcome their new federal overlord. It’s way past time that the comfortable Chardonnay-swiggers shared in the pain of reaping what they have been sowing for 50 years.

Well, if they’ve been swigging Chardonnay they deserve the punishment.

She routinely plasters pictures of her kids on her Instagram

Planning on lying, her intent is clear. What a slimy B….

And the worst part: a pathological liar.

This is one sick woman.

Out of control. CRT on steroids..

Massachusetts never brought the perps to justice, it has been a shit hole for some time.

She “got some back”.

She suffers from serious paranoia. Why does she worry about her or her children being killed because of a media interview?

This woman has no business being a prosecutor

She won’t prosecute trespass — unless you’re a reporter asking her a question.

You probably been looking at her baby picture.

For Mogadishu? I agree

Roly Poly, Lightfoot, li’l Kimmy Foxxxx, African-Not African Kamala … I have watched with interest while the USA falters and fails and these appointments only serve to ensure the erosion continues apace.

A couple of decades ago, here in Australia, I read the demographers’ finding that the illegals sailing into our country would become powerful and influential when they reached about 13-15% of the population. At that point they form persuasive voting blocs to win Local and State Government seats. France and the UK are accelerating to that status.

You lot have a bloc of 12% increasingly running Federal and State policy, to the great disadvantage of the USA. Buy Luxurious Mansions directed political and bureaucratic behaviour for the past few years. Many of your most populous cities now reveal a visible sameness in the people who are DAs, police chiefs, judges and politicians.

Long ago I never contemplated witnessing the collapse of the British Empire in my lifetime. Watching the fall and fall of the American republic was even less likely.

Ditching President Trump was your final act of suicide.

We didn’t ditch Trump. The globalists stole the election that Trump won. We didn’t do anything about the theft. Well, to be fair, some people protested, but they’re currently in prison and/or under FBI investigation for unlawful “parading.”

We won’t get fooled again.

Racist, no racist – this dumbass is CRAZY.

I’m wondering why these mixed race people like Obama, Rollins etc are so angry about being part white. Who really cares?

It’s an act. People of mediocre IQ and talent who are of mixed race and have a character disorder (like this psycho) learned they can get the best of both worlds.

There’s more than her “rantings of a white woman” rant. Check out how desperate she is to play victim. Like the 80’s one hit wonder band, She is mental as anything.

If she won’t prosecute for trespass or disorderly conduct, then what does she expect the police to do? And why call the police at all? Wouldn’t a therapist or social worker suffice?