Arab-Islamist party’s leader Mansour Abbas: “Israel was born a Jewish state, … it was born this way and it will remain this way.” 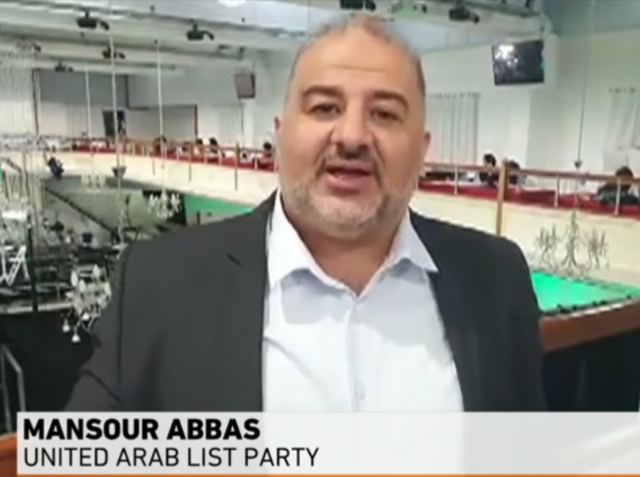 In a move that signifies the changing Arab and Palestinian attitude towards Israel, the leader of the Israeli Arab-Islamist party acknowledged that the country was created as a Jewish State and will remain so in the future.

“Israel was born a Jewish state, that was the decision of the people, and the question is not what is the identity of the state — it was born this way and it will remain this way,” Mansour Abbas, who heads the Ra’am-United Arab List, said on Tuesday.

The statement is significant given Abbas’ position as the head of Ra’am, a party that traces its origins to the radical Islamic Muslim Brotherhood movement. Historically, the Arab leaders have rejected the Jewish character of Israel, calling for the Palestinian ‘right of return’ — a demand that ignores the displacement of Jewish communities in the Arab lands and aims to reduce the Jews to a minority in their own country.

This year, Abbas made history when he led his Arab-Islamist party into the governing coalition that ended Prime Minister Benjamin Netanyahu’s 12 years reign.

This is a huge deal and a statement unexpected from an Islamist like Mansour Abbas. https://t.co/ZPPZ2Had9b

Prominent Israeli Arab politician Mansour Abbas, head of the Islamist Ra’am party, on Tuesday broke with the traditional stances of Israel’s Arab parties by declaring that Israel will always be a Jewish state.

“Israel was born a Jewish state, that was the decision of the people, and the question is not what is the identity of the state — it was born this way and it will remain this way,” Abbas said in an interview with Channel 12 News commentator Mohammad Magadli.

Arab parties in the past have promoted the view that Israel should be a state for all citizens, including advocating for changing the Law of Return that allows Jews in the diaspora to move to Israel and acquire citizenship.

Mansour Abbas, who heads an Islamist party and is part of the coalition government in Israel, is now officially more pro-Israel than @PeterBeinart, the darling of the anti-Zionist radical left who calls for the abolition of the Jewish state.

Life comes at you fast. https://t.co/Hxeqr1XGTh

The statement by the leading Israeli-Arab politician shows the shifting attitude toward the Jewish State among the Arab governments and the public. With Shia-Islamist Iran racing towards a nuclear bomb, Arab countries are deepening security and technological ties with Israel.

The rapprochement, which began last year with the signing of the Arab Accords, a framework brokered by President Donald Trump, has flourished despite little support from the Biden administration. Earlier this month, Prime Minister Naftali became the first Israeli leader to visit the United Arab Emirates amid growing trade and diplomatic relations between the two countries.

Many Arab governments see Israel as the only reliable bulwark against a potentially nuclear-armed Iran, extending its control across the Middle East through proxy militias from Lebanon to Yemen.

Israel is the only country in the Middle East that has shown the military capability and the political will to prevent Iran from going nuclear. In 2007, an Israeli airstrike destroyed the Syrian nuclear facility at Al-Kibar, effectively stopping the pro-Iranian Assad regime from acquiring its nukes. Several attacks on Iranian nuclear weapons sites have been attributed to Israel in recent years.

With President Biden’s diplomatic ‘engagement’ with Iran bordering on appeasement, the Israeli government is looking at plans to strike facilities linked to the regime’s nuclear weapons program.

This is the same guy who’s hand-in-glove with Hamas. He’s just recognizing the reality that changing Israel’s nature is not an achievable goal. Bringing it down altogether, though, is achievable and he’s still bent on doing that.

Why would I believe he means this?

Remember when Yasser Arafat would say nice sounding things to American and Israeli news sources, then turn around and say exactly the opposite in Arabic to Arabic news sources?

Treat this as one data point, to be treated very skeptically until confirmed many times by more data points in multiple languages.

He didn’t recognize it as legitimate, merely as an unchangeable fact.

I agree but perhaps….

There is no “perhaps” — The middle east is famous for word games. Obfuscation.

The only thing that matters is a statement that is BOTH clear and unequivocal.

>> His statement was more like the hint of a suggestion. Such that he was non-comital – but went just far enough to get attention of the liberal media who are desperate to say “look, they really don’t hate us.” and “no, we really doo not have to worry about the demographic time bomb that ticks every day.”

I don’t think the distinction is important. Gravity is an “unchangeable fact,” so we don’t try to alter the laws of physics. No Israeli-Arab leader prior to Abbas acknowledged this. Not only has Abbas done so, but he has actually joined a governing coalition with a strong right-wing composition. This is unprecedented in Israel’s 73 year history. This is IMMENSE progress.

A “strong right-wing composition” that has been completely coopted by the left, and is governing from the left. While Abbas holds it by the short hairs, says he will topple it if it attacks Hamas, visits terrorists in prison, makes it legalize Arab illegal construction while continuing to demolish Jewish construction, etc.

This platypus of a government only made sense on the premise that as soon as Netanyahu was out of office the Likud would see sense and elect a new leader, and then the government could fall apart and a new right-wing government could be formed. Well, that didn’t happen. The Likud seems stuck with Netanyahu, while dozens of right-wing MKs insist they can’t work with him, and nobody seems to want yet another election that will probably produce the same result.

What’s unprecedented is that the enemy has been allowed into the government and given a stranglehold on its continued existence, and therefore the government has to give it whatever it demands.

That’s what happened in this country years ago and now the enemy and the government are indistinguishable.

I understand the skepticism.

What language did he say it in?

What does he say in Arabic?