The Christmas Magic of “The Nutcracker”

The Christmas Magic of “The Nutcracker”

In 1954, George Balanchine’s Nutcracker was the first production to include young students from his school. 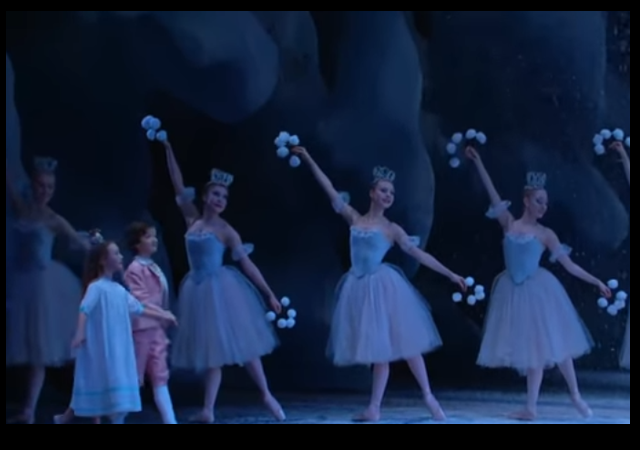 This Christmas season, I was blessed to be invited to see the daughter of a very dear friend dance the role of Clara in a local community dance group’s version of “The Nutcracker”.

While I was familiar with the music (courtesy of Disney’s Fantasia and a ballerina doll I had as a girl), I had never seen the ballet before that night. It was truly magical.

Many thoughts danced in my head, like sugar plum fairies. To begin with, I was delighted to see the audience was packed with children, teens, adults, and grandparents. The specter of the pandemic was left far behind, though some people did opt for masking.

And, despite the attacks on Western culture, it is clear that this is one of many holiday traditions people are embracing and passing onto the next generation. The joy of young children, dressed up to enjoy the ballet or dancing themselves, was beautiful to behold.

Also, at a time when the culture has gotten more coarse, it was so wonderful to see children and adults dress-up for an evening of real culture. “The Nutcracker” symphony will still be going strong, long after the last hip-hop song has been mercifully forgotten.

Ally J. Levine recently wrote her own homage to “The Nutcracker”. She took a fascinating look at the history of the ballet, noting that in 1954, George Balanchine’s Nutcracker was the first production to include young students from his School of American Ballet and to this day involves more children than any other New York City Ballet production.

Balanchine, who as a child back in Russia hated ballet class until he had the chance to perform on stage in “The Sleeping Beauty,” wanted to give children performance opportunities so they could understand what they were working toward in the ballet classroom.

“When a kid has the experience of performing on stage, that is 100% different than being in a classroom doing exercises,” said Dena Abergel, Children’s Repertory Director at School of American Ballet and former professional dancer with NYCB. “All the wonder and magic of being on stage and dancing to live music and putting on costumes and being with people you look up to on the same stage, it’s amazing.”

There are so many special stories related to “The Nutcracker. For example, when Pressley Meek was a baby, doctors said she would never walk.

She just made her ballet debut in the ballet.

Pressley, who was diagnosed with cerebral palsy as a baby, is still paralyzed on one side, legally blind in one eye and has trouble speaking.

But after half a decade worth of dance lessons, Pressley made her Orlando Ballet debut in her dream production, “The Nutcracker.”

“I made it my mission to help her,” she said. “I put her in therapy five days a week. Dance has made all of the difference for her, not only for her body, but also confidence.”

Sadly, the New York City Ballet cancelled its performances of “The Nutcracker” through Dec. 27th due to COVID-breakthrough cases. Hopefully, after that, the show will go on, the pandemic will end, and the magic will continue.

Until then, here is a video to enjoy:

my friends’ families are involved in a Classical Youth Ballet. Their school only does ballet, and instead of a disjointed recital twice a year, the school does full ballets, incorporating all the children from the 3-yo beginners to the 17-yo toe-shoe ballerinas. The winter performance in ALWAYS the nutcracker, and it is such a joy to watch the little 3-yo ballerinas come out and do their very best leaps as they are the little gingerbread characters. One of my daughter’s dearest friends was the Sugar plum Fairy this year, and it was fun to see how she had progressed over the years.

I am not a ballet kind of girl. But I enjoy this version of the Nutcracker because it is shorter than the full ballet, and it is fun to find our friends in the cast.

Th Nutcracker has been a family tradition for years, Our daughters danced in it and then our grandchildren, This is a moment to be transported to that magical land of beauty and music! We didn’t go to see it this year because of all the COVID nonsense —- including the requirement of a negative test! When life hopefully returns to normal, we will resume our tradition… meanwhile we have videos and memories to sustain us. Merry Christmas!