Likely, the stories have been published because the margins of discontent with the Democrats cannot be overcome by ballot-harvesting using pandemic-based election rules.

I noted that The New York Times as adopting my science-based approach to dealing with the COVID-19 pandemic, rather that the fear-mongering that has been favored since news of the outbreaks of the respiratory virus in China broke in early 2020.

I find it fascinating that another clearly liberal publication is also veering to a more sensible approach as well. Here are two recent top stories in The Atlantic: 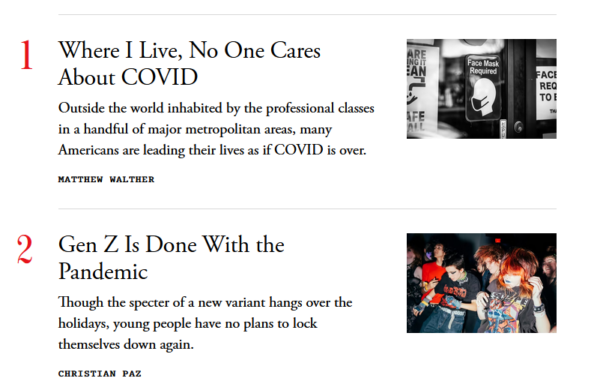 The first piece is from author Matthew Walther.

I am old enough to remember the good old days when holiday-advice pieces were all variations on “How to Talk to Your Tea Party Uncle About Obamacare.” As Christmas approaches, we can look forward to more of this sort of thing, with the meta-ethical speculation advanced to an impossibly baroque stage of development.

…I don’t know how to put this in a way that will not make me sound flippant: No one cares. Literally speaking, I know that isn’t true, because if it were, the articles wouldn’t be commissioned. But outside the world inhabited by the professional and managerial classes in a handful of major metropolitan areas, many, if not most, Americans are leading their lives as if COVID is over, and they have been for a long while.

The second piece is by Christian Paz, an assistant editor at The Atlantic.

…It’s still too early to determine just how disruptive the Omicron phase of the pandemic will be for most Americans. The Delta variant turned out to be much more transmissible than the original strain and stunted summer celebrations with breakthrough cases and surges in unvaccinated communities, but many of the young people I spoke with for this story told me they aren’t as worried now.

Part of that response comes from pandemic fatigue, but much of this feeling is a result of the new risk calculus they have developed for how they want to live their lives. As a member of this generation, I can confirm as much from what I’ve observed among friends.

And while I would like to believe my persuasive posts have lead people to reassess COVID risks, I suspect the underlying cause of the newfound restraint are polls like this:

When Americans were asked by pollsters which political party they preferred to control Congress, they selected Republicans over Democrats by a double-digit margin. CNBC called the GOP lead in the polling “historic.”

While only about a third [34 percent] of respondents said they prefer Democrats to control the legislative branch of government, 44 percent said they prefer Republicans. That’s a 10-point lead for the GOP less than a year before the 2022 midterms will be held.

It appears the margins of discontent with the Democrats cannot be overcome by ballot-harvesting using pandemic-based election rules. Clearly, there is a political aspect to infection risk calculation that has never existed in the history of disease.

Perhaps the “pendulum” is beginning to gain initial momentum in the opposite direction. Here is a related observation from another:

Personally, I gave up on the nyt decades ago, and only ever read articles from the atlantic if someone I respect suggested. As such I am thankful for those who yet have the ability to stomach such content.

And the Pandemic ends when people are just too adrenally fatigued to be worked up into another panic.

You can cry wolf only so many times before people get tired of your bullshit and wise up.

True. But, much can be destroyed before that happens…and I’m afraid much has been destroyed. There are a LOT of small businesses that will never come back from this.

That’s all part of their plan – destroy the livelihoods of average people so they will be clamoring for UBI, insist on “vaxx passports” which have NOTHING to do with “health” and EVERYTHING to do with surveillance and control, and cull the herd.

Mass noncompliance is the way out of this.

But the real moral of The Boy Who Cried Wolf is that even habitual liars sometimes tell the truth. In the story, just when people get tired of the boy’s bullshit and wise up to him, along comes a wolf, and the boy warns them, but they’re too “wise” to heed his warning so their sheep get eaten. Those who remember that wolves haven’t gone away, and that even a liar can tell the truth, go out to the pasture for the 4th or 2oth time, and rescue their sheep.

You think that’s the REAL moral of The Boy Who Cried Wolf?

You should re-read it:

The Boy Who Cried Wolf

There once was a shepherd boy who was bored as he sat on the hillside watching the village sheep. To amuse himself he took a great breath and sang out, “Wolf! Wolf! The Wolf is chasing the sheep!”

The villagers came running up the hill to help the boy drive the wolf away. But when they arrived at the top of the hill, they found no wolf. The boy laughed at the sight of their angry faces.

“Don’t cry ‘wolf’, shepherd boy,” said the villagers, “when there’s no wolf!” They went grumbling back down the hill.

Later, the boy sang out again, “Wolf! Wolf! The wolf is chasing the sheep!” To his naughty delight, he watched the villagers run up the hill to help him drive the wolf away.

When the villagers saw no wolf they sternly said, “Save your frightened song for when there is really something wrong! Don’t cry ‘wolf’ when there is NO wolf!”

But the boy just grinned and watched them go grumbling down the hill once more.

Later, he saw a REAL wolf prowling about his flock. Alarmed, he leaped to his feet and sang out as loudly as he could, “Wolf! Wolf!”

But the villagers thought he was trying to fool them again, and so they didn’t come.

At sunset, everyone wondered why the shepherd boy hadn’t returned to the village with their sheep. They went up the hill to find the boy. They found him weeping.

“There really was a wolf here! The flock has scattered! I cried out, “Wolf!” Why didn’t you come?”

An old man tried to comfort the boy as they walked back to the village.

MORAL OF THE STORY:

“We’ll help you look for the lost sheep in the morning,” he said, putting his arm around the youth, ”

MORAL OF THE STORY:

Nobody believes a liar…even when he is telling the truth!”

And the best part is how full of reeeeeeeeeeeee the comments section is, from indignant Mask Karens swearing they’ll never read The Atlantic again!
How many ways can one column win?

Those publications are beginning
to realize the idiocy of the current approach.

I also believe they are finding it harder and harder to defend the pan-porn position. That’s the thing about Truth and Facts – it will prevail and now mags like Atlantic are beginning to see what we’ve said all along is true – this is overblown and mandates don’t do anything.

When Americans were asked by pollsters which political party they preferred to control Congress, they selected Republicans over Democrats by a double-digit margin.

The Atlantic has run contrarian articles for a while about covid, particularly the effects for children.

“Overcaution carries its own danger to children” dates to Feb 2021.

They even did an article on corrupted statistics, particularly the hospitalized with versus for covid issue. “Our Most Reliable Pandemic Number Is Losing Meaning” came out in September.

If you’re trusting ‘The Atlantic” for anything you’re already in trouble.

Covid isn’t over, quite the opposite it’s endemic. The panic about Covid in many areas is definitely over and has been for some time. The authoritarians oversold the dangers and deliberately hyped up fear. This was true for ‘classic covid’ and for each subsequent variant. Unfortunately for these power hungry authoritarians they hit obstacles. This isn’t 1985 where information was disseminated via a handful of national newspapers and wire services along with the traditional broadcast networks. Their media allies delivered their propaganda but were challenged via talk radio, podcasts, commentary websites and a few cable news outlets.

While the whole picture isn’t available much of the data has been public on the the CDC and State public health webpages. It doesn’t take a PhD in immunology to understand and evaluate basic data. The fact that the data regarding natural immunity, low cost treatment options and the Wuhan lab/China response have been downplayed, largely ignored, demonized or missing from a robust public policy debate regarding next steps for Rona is very noticeable.

The seasonal aspects of this virus were ignored in red states this summer; Florida and then played up in blue States this fall. Each new variant is hyped as the plague. All of this is being done for partisan purposes. The folks have figured this out and more figure it out every day. The pushback is growing and the d/prog know they are holding the short end of the stick politically. That’s why they are attempting to ram through legislation before they loose power over the next few election cycles.

Yes, but the common cold is making a comeback. Shutdowns are coming.

Really, who cares what these fake journalists write in their commie propaganda rags!

The kooks just found Pasadena’s first Omicron infection. Apparently, someone saw a doctor about being tired and now we are probably going to be put in lock-down. Npne of these people are paying any attention to the science. It’s all about locking us down by next November.

I look forward to seeing those Atlantic writers being blocked on Twitter and Facebook for spreading disinformation. Or is it misinformation?

We are a soft generation that has not, by comparison to the hardy pioneer stock that founded this nation, had to take real risks and face real hardship as part of our daily lives. This growing shift in the perception of the risks of COVID isn’t pandemic fatigue, it is the process of acquiring wisdom about the real world and the ever-present trade-off between freedom and safety. We can’t conduct our lives like frightened rabbit for long. This pandemic will make us all tougher and wiser if we learn the right lessons from it.

“It’s still too early to determine just how disruptive the Omicron phase of the pandemic will be for most Americans.”
Actually, no phase of the pandemic has been disruptive. The disruption has come from (futile) government efforts (that never should have been attempted) to contain an airborne pathogen. Had we merely protected the vulnerable, and worked more on (honestly) evaluating therapies based on existing medicines (rather than developing vaccines), most people would never have noticed the pandemic.

Was this change of opinion after demanding all their employees get the “vaccine”?