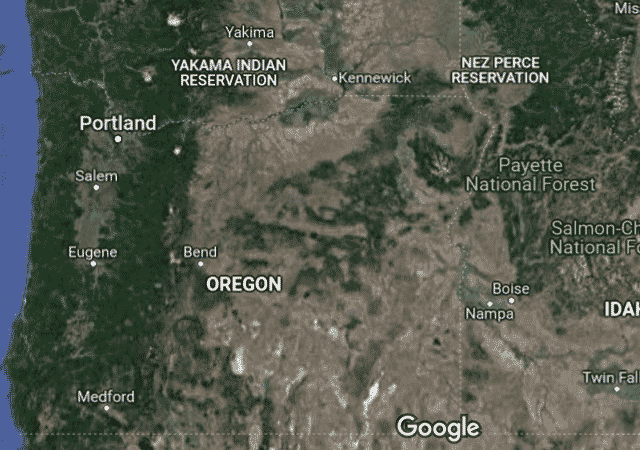 And for the state of Oregon, it is concluding with a spectacular display of geology.

Dozens of earthquakes rattled off the coast of Oregon over the past 24 hours — some reaching 5.8-magnitude — but none caused major damage or tsunamis.

About 60 temblors shook in the Blanco Transform Fault Zone about 200 miles off the shore, U.S. Geological Survey data indicates. The quakes were centered roughly due west of Newport, beginning Tuesday morning and occurring into Wednesday, The Oregonian reported.

At least eight of the earthquakes were 5.5-magnitude or higher, the strength that would typically cause damage if closer to land.

The reason for the concern that was evident in social media is the fault is close to the infamous Cascadia Subduction Zone. This region is noted for its periodic, massive earthquakes and resultant tsunami.

The last earthquake that occurred in this fault was on January 26, 1700, with an estimated 9.0 magnitude. This earthquake caused the coastline to drop several feet and a tsunami to form and crash into the land.

What is most surprising is that evidence for this great earthquake also came from Japan. Japanese historic records indicate that a destructive distantly-produced tsunami struck their coast on January 26, 1700. By studying the geological records and the flow of the Pacific Ocean, scientists have been able to link the tsunami in Japan with the great earthquake from the Pacific Northwest. Native American legends also support to the timing of this last event.

More on the Cascadia Subduction Zone can be found here.

The good news is that the fault line where the swarm is occurring is a different type of fault system. The ensuing quakes should not cause major structural damage or tsunamis.

“The Blanco Fracture Zone is not connected directly to the subduction zone so it won’t affect the big fault under land (Cascadia megathrust),” said Eric J. Fielding, a geophysicist at NASA’s Jet Propulsion Laboratory in Pasadena, Calif.

“M5s on Blanco are very common and have never been followed by something on land. Plate tectonics in real time,” said seismologist Lucy Jones, referring to magnitude 5 temblors in the area.

The Blanco Fault Zone is a transform, or strike-slip, boundary; that means it’s where tectonic plates slide along one another. The most dangerous and powerful faults are usually seen in subduction zones, where one plate dives beneath another.

To put it into parlance that we can all now understand: Cascadia is the Delta variant, and Blanco is the Omicron variant.

Better yet: Blanco earthquakes are fun and not fearsome.

Seeing posts about earthquakes off the coast of Oregon today?

In this area, earthquakes of this size and larger are extremely common (but must be a fun place to hang out?).

Check out this article from one of it's recent active times, in 2019.https://t.co/ZiOUKPi2Ru

The faults are very different in DC.

Yep, they can cause much more damage all over the country.

DC used to be a big swamp (physically). We’d have better luck with sinkholes.

Even apart from all the loony thinking that takes place in the Northwest, it be in a whole lotta trouble tsunami-wise,

A physics professor local to the area told us that when that big one hits… forget about all the earthquake fittings and design… there is so much energy wound up in those plates that you’ll be standing a half a mile away in about a second. No building that’s not a small shack made of plywood and studs will be standing.

The biggest dangers will be on the coasts (tsunami), and to brick buildings in Vancouver, Seattle, and Portland. If we’re lucky on the eastern side of the Cascades, the roads and bridges will be down. That way, no wave of entitled city slickers coming out here. I’d rather not have to deplete our ammo. LOL

Somebody tell me again how the potential, possible, just maybe rise of less than a degree in temperature over the next century+ is the most serious threat to mankind?

We know the ‘global warming’ scam for what it is: a scam!

On another note: There’s a serious thing called plate tuteonics, it’s going to take the land we live on right out from under us. And there’s not a damn thing any human can do about it.

And still on another note: the sun is expanding, and will eventually envelop the Earth, frying it to a crisp.

Back to the ‘global warming’ scam.

I saw an article that said that natural gas shortages combined with very high prices in Europe made freezing to death a increased risk; and the related impact on shutting down fertilizer plants and future crops an increased starvation risk in a couple of years.

Here’s wishing western Oregon all the fun in the world.

One thing REALLY worthwhile about Portland State University is the geology program. Back in the day they had the siesometer (or whatver its called- it’s been 20 years) running in a display case in the basement of the building- so you could see the activity in real time. They also posted the ticker tape from some of the bigger events- like the quake in 93 that knocked a lot of bricks down.

Apparently everything possibly geologic has happened in Washington State. I suggest the evening lecture series by Nick Zentner, maybe starting here. https://www.youtube.com/watch?v=Y-w65F_b91U Cascadia will be a mother. Also look at the works of Brian Atwater, who as a true field geologist unraveled it, and much much more.

What just happened is a nothingburger Anyone seeking current excitement can look at the La Palma youtube vids here.

Volcanism is all over the place out here, not just in the prominent ones of the Cascades chain. It’s especially apparent on both sides of the Columbia River Gorge, and throughout Eastern Oregon. My spouse took a bunch of geology courses in college and likes to point out all the volcanic features in Oregon’s interior. Once you’re clued into it, it’s a new level of amazement.

To me, the most notable feature of Eastern Washington (and western Idaho and Montana and a bit of Oregon) is the remnants of the Missoula Floods. The origins of Eastern WA’s “channeled scablands” was an intense and very important scientific controversy between the mid-1920s and the late 1950s.

The “scientific consensus” held that the scablands and coulees (Grand Coulee Dam, anyone?) were formed over millions of years. A lone geologist said they were formed by a series of late-Ice Age floods that repeatedly broke an ice dam that held back an enormous lake containing glacial melt. The end of the glacial period was uneven, so that dam repeatedly broke and re-formed dozens of times, sending epic walls of water all the way to the oceans.

The geology establishment regularly lampooned J. Harlan Bretz, until aerial photography vindicated him. The underyling issue was “uniformitarianism,” and those academic politics were vicious, like today’s “climate change” politics in many ways. A good overview, readable and informative:

Soon to be renamed “Trump’s Fault”