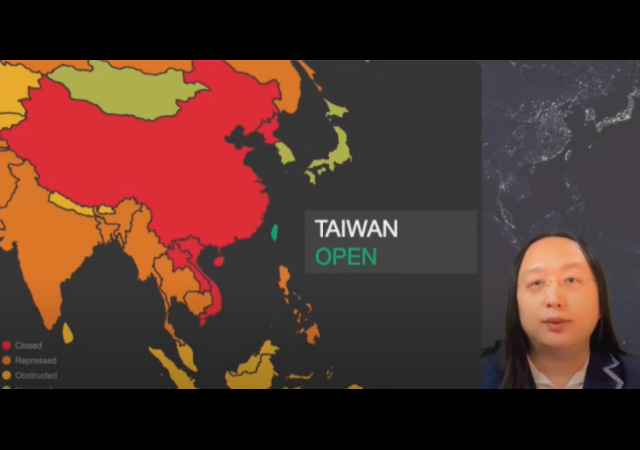 The State Department denied a Reuters report saying the White House cut Taiwanese Digital Minister Audrey Tang’s feed during the Summit for Democracy because a map in it showed Taiwan in a different color than China:

The State Department said “confusion” over screen-sharing resulted in Tang’s video feed being dropped, calling it “an honest mistake.”

I don’t believe in coincidences. Our government has a “One-China” policy, which means they won’t take “a position as to whether Taiwan is part of China.”

Sources told Reuters the “One-China” policy is a reason why the administration dropped the feed:

Sources familiar with the matter told Reuters that Friday’s slide show by Taiwanese Digital Minister Audrey Tang caused consternation among U.S. officials after the map appeared in her video feed for about a minute.

The sources, who did not want to be identified due to the sensitivity of the matter, said the video feed showing Tang was cut during a panel discussion and replaced with audio only – at the behest of the White House.

The White House was concerned that differentiating Taiwan and China on a map in a U.S.-hosted conference – to which Taiwan had been invited in a show of support at a time when it is under intense pressure from Beijing – could be seen as being at odds with Washington’s “one-China” policy, which avoids taking a position as to whether Taiwan is part of China, the sources said.

Here is the YouTube video starting when Tang comes up to speak. 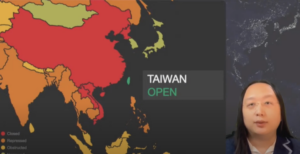 Uh oh! Then they go back to Tang and we don’t have her video feed! 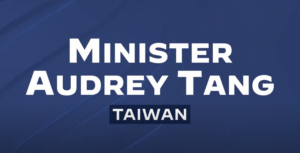 How about this disclaimer? 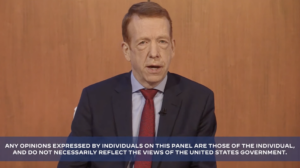 So people within the government told Reuters the map “generated an instant email flurry among U.S. officials and the White House National Security Council (NSC) angrily contacted the State Department, concerned it appeared to show Taiwan as a distinct country.”

The administration complained to Taiwan. Taiwan got mad someone dropped Tang’s video:

The source called the U.S. move an over-reaction as the map was not inherently about national boundaries, but the NSC was also angry as the slide had not appeared in “dry-run” versions of the presentation before the summit, raising questions as to whether there was intentional messaging by Tang and Taiwan.

“They choked,” the source said of the White House reaction.

A second source directly involved in the summit said the video booth operator acted on White House instructions. “It was clearly policy concerns,” the source said, adding: “This was completely an internal overreaction.”

The sources saw the move during a panel on “countering digital authoritarianism” as at odds with the summit’s mission of bolstering democracy in the face of challenges from China and others. They also said it could signal that the administration’s support for Taiwan was not as “rock solid” as it has repeatedly stated.

Like the State Department, the NSC countered the report:

“At no time did the White House direct that Minister Tang’s video feed be cut,” the spokesman said in an email, also blaming it on confusion over screen-sharing and adding that the full video could be viewed on the summit web page.

Tang said she did not believe anyone cut her video over the slide. Taiwan’s government blamed the incident on “technical problems.”

The Taiwanese government also said they included the slide in advance.

This presidency IS a farce, the whole thing.

That’s because there’s no president at the present time.

Or too many “presidents”, depending on your point-of-view.

If all that is required is a descent into farce, the Biden administration is perfectly down with that.

You have to do it three times in a row before it counts. Plus if you secretly cross your fingers it don’t count.

Former VP Joe Biden is 79 years old, so he is unable to comply with any command to jump, assuming he even has the mental capacity to understand the meaning of the term jump. His inability to comply will of course be seen by his cohorts in the media as an implacable and unwavering commitment to American patriotism.

The feed obviously cut itself off to show support for Alec Baldwin’s trigger finger and the Waukesha SUV.

Alec Baldwin says that when he dies he’s gonna donate his trigger finger to science.

So it means Baldwin is giving Fauci the finger ?

I use Fauci embossed toilet paper for wiping.

China has made it clear that they intend to take back Taiwan, including the largest microchip factory in the world. And while Biden is president, they are ensured of a weak American response.

I would say they are ensured of no American response other than fawning obsequiousness.

In other words, China is getting what they paid for.

I rather suspect a takeover of Taiwan by China would evoke the American response of a collapsing stock market and economy. We can’t do with any major interruption of supply.