“In 29 schools, students scored below 5% on math or English, and sometimes both.” Decarbonizing effort could cost $2.5 billion according to Cornell University researchers consulted on the proposal. 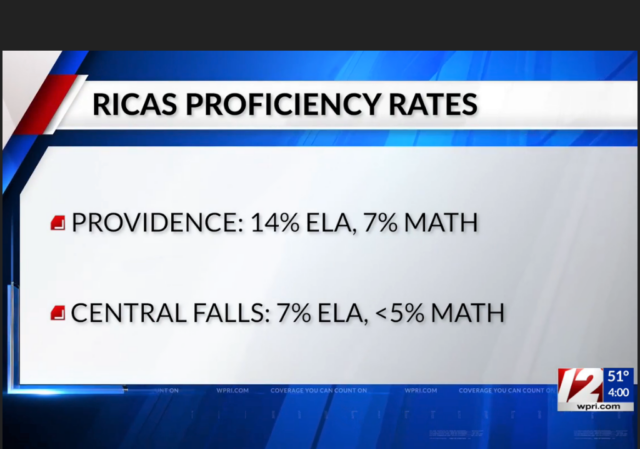 Math and English scores are way down in Rhode Island schools, but progressive groups are urging them to focus on the real problem. Addressing climate change.

It’s all about the children, right?

Rhode Island environmental and organized labor organizations are calling on state government to use an influx of federal funds to ensure that any plans to rebuild public schools also include the incorporation of solar power and other clean energy measures.

Climate Jobs Rhode Island, the coalition formed earlier this year between environmental advocates and labor leaders, announced a campaign Wednesday pushing for all public schools in the state to reach net-zero emissions by 2030.

Cornell University researchers working for the coalition tentatively estimate that attaining the goal would cost $2.5 billion, but that it would result in $35 million in annual energy savings and support more than 11,000 jobs over the next nine years.

Coalition members argue that the goal, though ambitious, is realistic given that $1.4 billion has been allocated to school construction in Rhode Island since voters approved $250 million in bonds in 2018 to rebuild school buildings.

They’re urging the state to tap COVID relief funds, money from the Biden administration’s infrastructure package that became law last month, and, if it passes Congress, Rhode Island’s share of the Build Back Better legislation. They also want another bond proposal equal to or greater than the one approved three years ago to be put before voters next year.

A coalition of labor unions and environmental groups is calling for Rhode Island to tap federal and state funds to “decarbonize” public school buildings by shifting them from fossil fuels to renewable energy sources….

The coalition said the “Green and Healthy Schools” initiative would help Rhode Island meet the targets established in the newly enacted Act on Climate, which requires Rhode Island to cut greenhouse gas emissions to 45 percent below 1990 levels by 2030 and to achieve “net zero” emissions by 2050. Decarbonizing every public school in the state would eliminate 105,913 metric tons of carbon dioxide equivalent emissions, the group said….

Priscilla De La Cruz, senior director of government affairs of Audubon Society of Rhode Island and co-chair of Climate Jobs Rhode Island, said school buildings across the state are powered by “dirty fossil fuels,” and it’s been decades since many were updated.
“Building green and healthy schools — with a focus on targeting investments in communities of color on the front lines of climate change — can take action on climate change, create thousands of good union careers, and advance racial equity,” she said.

Rhode Island test scores are in the crapper, schools are failing, teachers are quitting, and these lunatics are worried about the carbon footprint https://t.co/XUMH8GYuj7 pic.twitter.com/qegSZMzUlS

That Linda Borg article from the Providence Journal is just over a month old:

Why RI’s latest student test results are so bad. It’s not just COVID

Even when you factor in the disastrous impact of the pandemic on students, Rhode Island’s latest scores on the Rhode Island Comprehensive Assessment (RICAS) are distressing.

In 29 schools, students scored below 5% on math or English, and sometimes both.

Achievement First, a network of formerly high-performing charter schools in Providence, plummeted from 57% proficiency in math in 2019 to 16.5% today. Blackstone Valley Prep, another highly regarded mayoral charter school in northern Rhode Island, went from 50% proficient in math to 25% proficient…

While COVID-19 certainly accounted for much of the poor performance, with students learning remotely for a chunk of last year, it doesn’t tell the full story.

Rhode Island’s student performance, especially in math, has been languishing for years, despite countless hours of teacher training, new curricula and changes in leadership at the state level.

While Massachusetts, typically the highest-performing state in the U.S., began its school reform movement in the early 1990s and stayed the course, Rhode Island kept changing its mind about testing, standards and teacher evaluations.

The left puts their agenda above everything. Fighting climate change in schools should be secondary to teaching basic subjects like math and reading. You would think that’s just a given.

First, they delegitimize real learning, now they want to “decarbonize” our schools.

This is a real quandary for the left, because they have had sole control of the schools for more than half a century. Who can they blame? President Trump? Big oil?

China and India are kicking our academic butts in terms of real learning, while we “wokerize” our schools, finding racism in math etc., rendering them ineffective. Putin and Winnie the Pooh are laughing their collective (pun intended) rear ends off at us.

And now we have the feckless, ineffective and mindless Biden regime, trying to decimate all other aspects of the country.

When will America wake up to the leftist charade, the anti-American socialism?

The Venezuelization of America is on the fast track.

they already do. This didn’t start with this regime., it’s been going on for 100 years. Look up, John Dewey.

No need to teach kids things to succeed when you can fill their heads with detritus and then wonder why every other country is blowing us away.

If they concentrate on STEM subjects so the students will be scientifically literate, the next generation will have the background to make us carbon neutral in the next half-century.

Since pencils use carbon (graphite)… Removing pencils prevents wrong answers on tests. No one can fail! By the way, some schools have done away with Dr and Fs.

If you shut down the public school system, the footprint will be zero.

This is long overdue! I been upset with the way education has become more carbonized over the years. Carbon in pencils, carbon in steel, batteries, electrodes, lubricants. There are many replacements available from China and it only makes sense that we would take advantage of them if we are going to look out for our children and prepare for the 22nd century.

But I’m disappointed they’re only spending 2.5 billion for this. They could have taken more from the English or math curriculum.

In the short term there is money to be made by the contractors and friends of the unions, so we need to mortgage our grandchildren’s future and do slap dash renovations to the school buildings with CCP materials. Never mind that there might not be a next generation after all the good paying jobs move to Asia. There will still be swarms of immigrants sweeping through America to pick the bones of whatever is left.

Why spend all that money decarbonizing the schoolhouses?
In two or three years, Antifa/BLM will just recarbonize them for us.

Rise from the ashes like a phoenix and vote democrat and do it again and again until you’re blue in the face.

Are the schools really failing? That depends on your perspective/agenda. It appears the “public (read government) schools purpose is to indoctrinate our children and launder taxpayer money. From that perspective, the schools are quite successful. Education has always been territory occupied by the ruling class and the middle class (set up by the USA founders) has threatened that tradition.

The elite educate their children in non-government schools as they deny minorities any option other than those wonderful government schools the elite avoid. Why would they do that? None of this is new in the history of the planet.

Are the schools really failing?

SCHOOLS ARE AN AMAZING SUCCESS – FOR DEMOCRATS

1. Way to pay Democrat supporters (teachers and their unions are heavily Democrat)
2. Way to brainwash the young (get them away from their parents for 6 hours a day)
3. Way to undermine society

Well, that’s a better answer than I could give. I deserve 10 thumbs up for that.

Should say “YOU” deserve ten thumbs up. Not me.

Fighting climate change in schools is a deadcatting issue so we do not look at the substance of the “education,” like CRT. The money laundering is a bonus. I suspect this means that they think they are in trouble with CRT.

Treating symptoms for profit. Follow the cargo cult, not the science. Creative causes with “benefits”.

Can they abort the baby, cannibalize her profitable parts, sequester her carbon, and have her, too? Wicked.

With an additional 80 million humans born each year, the food webs will; collapse long before the climate starts killing us.

As I read what I just wrote I’m afraid that I was not clear enough. For the record… The total number of humans on Earth increases by 80 million every year. That’s an extra billion every dozen years or so. Realistically, how long do you think we can keep it up? As we expand our habitat, the habitats for the others shrink. As one species after another disappears into history, the complex food webs of the biosphere are unwound strand by strand. Eventually, like real spider webs, they just collapse under the stress. Then things get real funky, real quick for humans.

Co-existence is unlikely. “Bears? No, we don’t want any bears living on our street, thank you.”