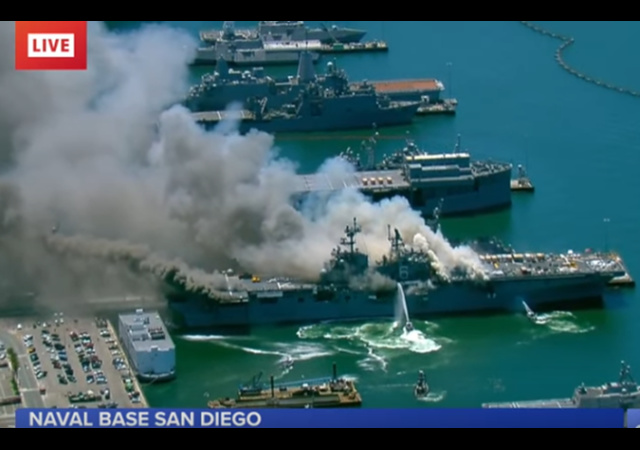 US Navy prosecutors alleged during the first day of a preliminary hearing at Naval Base San Diego that the sailor who is accused of starting the fire that destroyed the USS Bonhomme Richard was ‘disgruntled’ after dropping out of SEAL training.

Seaman Ryan Mays was angry about his reassignment to the Bonhomme Richard and lied to his family about his SEAL training, Navy prosecutor Cmdr. Rich Federico said at a preliminary hearing.

Mays was charged by the military with aggravated arson and the willful hazarding of a vessel over the July 2020 blaze, which burned for nearly five days and injured more than 60 sailors and civilians.

The Bonhomme Richard had been undergoing a two-year, $250 million upgrade while docked at Naval Base San Diego at the time of the blaze.

The court proceeding are known as an Article 32 hearing in the military justice system. The focus is to allow hearing officer, Navy Capt. Angela Tang, to determine if there is enough evidence to prosecute the sailor in connection with the July 2020 fire.

Mays is denying the charges against him. The first day of the hearing, the prosecution team laid the groundwork of this case.

[T]hat the fire, which burned for four days and led the Navy to scrap the ship this year, was intentionally set in the vessel’s lower vehicle storage area and that sailors onboard saw Mays going into the “Lower V” right before the blaze began.

Prosecutors said Mays was angry about being a deck seaman aboard the ship instead of a SEAL — the job he joined the Navy to do. Prosecutors said Mays had voluntarily dropped out of the Navy’s Basic Underwater Demolition/SEAL school — known as BUD/S — on his fifth day there, then lied to his family and other sailors about why he didn’t make it.

The second day of the hearing focused on witness accounts.

Another witness who is a sailor described the moment that she said Mays discovered that he was being taken to the brig. She said that he mumbled, “I’m guilty. I guess I did it…it had to be done.”

This August, unsealed documents revealed possible sabotage of the firefighting efforts and tampering of evidence. A separate Navy report concluded that there were sweeping failures by both crew and command, calling the fire preventable and unacceptable.

The hearing will conclude Thursday.

(psst! The headline need a change in word order.)

Prosecutors said Mays had voluntarily dropped out of the Navy’s Basic Underwater Demolition/SEAL school — known as BUD/S — on his fifth day there, then lied to his family and other sailors about why he didn’t make it.

Which would have been enough for the other sailors, at least, to know he was full of it.

No one washes out of SEAL training. You have to quit. It’s set up that way.

I would imagine an injury would get you washed out.

SEAL training as shown in American Sniper is designed to separate the men from the boys with men getting through and boys quitting. This quitter should have been discharged before he had the opportunity to set an aircraft carrier afire.

SEAL training is one of the most difficult training regimens in the world, with high rates of withdrawal. Because one doesn’t make it and withdraws doesn’t mean they should be discharged from the service. Most go on to have entirely honorable tours of service in other capacities. The training is meant as a weeding out process, no shame in not completing it, they at least tried. If it were easy, we would all be SEALS. This guy is an anomaly that should be punished if found guilty.

“…sweeping failures by both crew and command…” That seems to be the hallmark of our modern military. We only managed to be on the winning side in WW II because we had great manufacturing support for our allies. The Russians actually won that one. And ever since, we’ve killed lots of people, and suffered many casualties in our forces, yet have no yet won anything except justified vilification for our efforts to enrich the military-industrial-medical complex while trying to demolish entire civilizations and impose our own profit-driven system of governance on their societies.
I’m mortified at how proudly I served. After I got out, I had friends, some of them vets, who had thoughtful, articulate objections to our involvement in the destruction we were engaged in (at that time, Vietnam), but I was so damned naive that I started an organization to counter their arguments, even as I remained friendly with some of them. And, eventually, regrettably years later, I finally realized that our government is largely comprised of selfish, murderous asses whose only concerns are reelection and easy access to varied forms of thievery.
So, naturally, there is nobody in government (well, hardly anyone) who is focused on ensuring that our military leadership is competent. Their only concern is selfish and venal. If our entire country goes down the tubes – and we certainly are headed that way, as current experiences make clear – they won’t act, because their interests are completely in themselves. There is no long view, no concern for the wider polity.
So the sweeping failures of command and crew were hardly limited to that one vessel. They have embraced our entire nation. I’m hoping that Canada will still let me in. They admit lots of other persecuted folks. And given our governance failures, citizens of this formerly great nation should now be eligible.