Leftists won’t reproduce AND they help us end abortion. WIN-WIN! 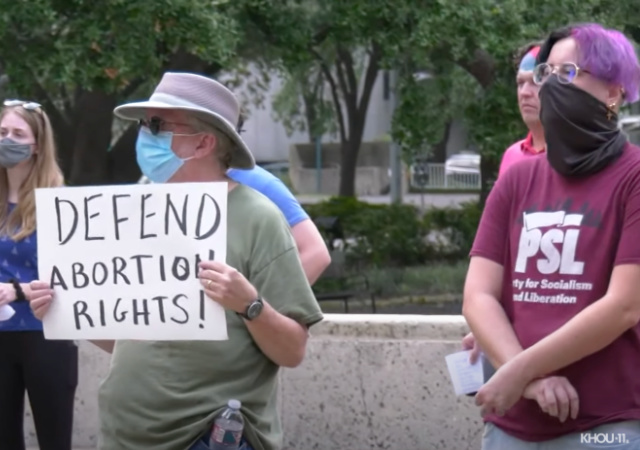 I thanked Illinois and New Jersey for proving the pro-life movement’s argument about abortion not being about safety or privacy. Illinois revoked a law requiring notifying a minor’s parent or guardian before getting an abortion. New Jersey now allows non-physicians to perform abortions.

Now it seems pro-choice men want to help END ABORTION! You know, like us in the pro-life movement. We want to END ABORTION.

I’m trying to find the words for this story. Cutting off (literally!) means of reproduction to own the cons.

The Texas pro-life law, which bans abortion after six weeks, has driven men to have vasectomies to prevent unintended pregnancies.

So these leftist men and women are not reproducing and they’re helping to END ABORTION.

Who doesn’t love that rare “WIN-WIN”?

Abstinence is a great and preferred method to prevent unintended pregnancies.

But come on. People are going to have sex. So while I thought the logical thing to do would be to use condoms, birth control pills, or even spermicide, I guess some men went the full distance by having a vasectomy.

Yes, men are having vasectomies because courts across America have accepted science that life begins at conception and abortion is murder.

Andy Gress told The Washington Post he had a vasectomy after his fourth child with his wife:

“The procedure was a total relief, almost like the covid shot — like I’m safe now,” said Gress, who works in higher education. “I wanted to man up.”

But Gress’s action wasn’t just about his family. He also believed he should do more to support his wife and other women who don’t think the government should decide what they do with their bodies. “I’ve seen the miracle of life,” he said. “But I’ve also seen kids who are born into poverty and misery and don’t have a fair shot.”

Doctors don’t have stats to prove the Texas abortion law has motivated the men. Dr. Sarah Miller in Boston said she has more patients because of the law:

But, Miller said, she has seen an increase in patients at the small clinic she opened in Boston less than three years ago because she couldn’t believe “the paucity of options for men and people with men parts.”

At one point, she was told that vasectomy was not considered part of family planning, and she had to make her own arrangements to get the necessary training.

“It warms my heart to hear men say, ‘I am so nervous, but I know this is NOTHING compared to what my wife has gone through,’” she said in an email.

The left acts like abortion is not a big deal. The women I know who have had one said they regret it. They live with that regret and sadness their whole life. Remember to embrace, comfort, and love those women.

So, yes. The plan is working: fewer leftists, but more importantly, an end to abortion.

Our plan is working! pic.twitter.com/2b9C0cFYbk

Look on the bright side – at least their genetic lines end here.

So the left is committing self-eugenics?

And a form of “gun control”…. shooting blanks. The Left now has a WIN-WIN_WIN!!!

You’re assuming someone would procreate with these losers.

Something tells me they don’t understand the procedure.

Maybe they think they can apply vaccine logic: “My vasectomy won’t work unless you have one too.”

I believe they thought of abortion as a kind of female vasectomy, one baby at a time.

Slightly off topic, but…
What’s the one word a man least wants to hear the doctor say during a vasectomy?

CNN announces Trojan condom futures are down 50%. If they go any lower it would be a good time to invest.

I have always thought it strange to have a condom brand that uses the name Trojan and a Horse as a logo. Considering that the famous Trojan Horse was used to sneak soldiers inside of a defended location.

What are they trying to say?

The marketing gurus prolly thought it had a better ring to it than “Spartan” or “Athenian”.

ROTFL. LOL. Thread winner, at this point. LI commenters are an impressive bunch however and it’s still early!

The other interesting point is that it doesn’t level the playing field between men and women as some imply. A small or even increasing number of men undergoing vasectomies doesn’t prevent women from getting pregnant by someone without who hasn’t had one. In fact it would seem to help men by removing the last remnant of societal restraint of sex; ending up in a paternity suit. It’s another irrelevant action in a chain of absurd actions seeking to equalize the consequences of sexual behavior between men and women. It doesn’t do that at all.

Cutting off your nose to spite your face?

This is quite possibly the most unintentionally ironic statement in human history.

I was of the opinion that leftist “men” (including the ones that think they are women) were already fully emasculated.

Wish all news was this funny

Can we get Texas to pass a law banning suicide?

There would be no repeat offenders.

A lesser evil is still an evil and should not be celebrated, even if accepted. We need to have a culture that is open to new life as a precious gift of God. Those married couples who discern that they are unable to responsibly raise a child should practice abstinence during the fertile times and leave any unintended miracles to God’s will. Other forms of contraception do not conform to the dignity of the spouses or recognize the gift of a woman’s fertility.

Even for Catholics it’s a very different kind of wrong than abortion. I don’t know whether Catholics distinguish between offenses against the Creator and those against other people, but abortion is in the latter category, while if contraception is an offense at all it’s in the former category.

Good observations. Being open to the creation of new life is necessary for a valid sacramental marriage. The Church uses the term procreation with the belief that when a man and a woman are joined in the marriage act the Creator of the Universe stops what He is doing to give that new creation a soul. Refusal to be open to new life could be grounds, later after the divorce, for a petition requesting the invalidation of the marriage to be granted.
Prior to 1930 all major Christian denominations agreed with the Catholic Church’s teachings on contraception. In 1930 at the Lambeth conference, meeting of Anglican church leaders from around the world, they agreed contraception was allowable for sexual activity which was purely recreational.
As for abortion the Church has a list of sins which cry out to God for vengeance. Death of an innocent is one of those sins.

“…cry out to God for vengeance.”

On resurrection morning more people will rise from the landfill (or wherever they dispose of the babies) than many of the cemetaries.

Leftist men…almost an oxymoron. I thought they were pretty much geldings anyway.

The Texas pro-life law, which bans abortion after six weeks, has driven men to have vasectomies to prevent unintended pregnancies.

Who could have seen that coming, or not coming, as the case may be?

That said, there is no mystery in sex and conception. A woman and man have four choices. Baby Lives Matter (BLM).

He misspelled “rights”. Demos-cracy is aborted at The Twilight Fringe.

That said, the Texas law synchronizes the viability threshold of life at the beginning and end of our evolution by restricting reproductive rites, and is consistent with laws that discourage other homicides.

To n.n: I am curious about your notion of restricting reproductive rites. I suppose people with some fetishes might have rites they use when approaching reproduction, but most of us undertake the act spontaneously without any set ritual or fixed order. Which rites are being proscribed?

Blood sacrifice to the false god of modernity? IOW an abortion is the implied duty of a modern feminist as she must reject traditional notions of family formation, motherhood and becoming a wife to a husband in favor of terminating an unwanted parasite that will interfere or impede her career and independence.

Does that Boston doctor use a questionnaire to determine the “why” that someone gets a vasectomy.? How do we know the TX law was involved?

The poster child decided to cut the cords after 4 kids…. that doesn’t help the production of leftists much.

So the preferred solution is a permanent incapacitation of the male contribution while any number of transient and/or situational remedies for the female are unacceptable? Sounds like we should be able to figure out the source of this….

Following up on my earlier reply to fillusdextris, I suspect that the people doing this think they’re dealing some sort of blow to the right to lifers, as if they’re somehow pwning them, because they expect RTLers to be opposed to vasectomies and contraception. Which might be because they think RTLers are all motivated by religion, and are all Catholic. That might also be part of the reason they’re so opposed to RTL; they think it’s some sort of attempt to impose theocracy on them. Hence all that Handmaid’s Tale nonsense, because they imagine that the villains in that novel are Christians, or are at least something that Christians would recognize.

Many women regret their decision to abort their unborn baby. I’ve heard regrets from men who encouraged their female companion to have an abortion. I’ve also heard men regretting their vasectomy decision. I would hope these men would find better choices. I suspect if they are really interested in unrestricted, unrestrained sexual activity then a vasectomy is where they are headed. Unfortunately such a life is probably not going to be fulfilling.

Andy Gress told The Washington Post he had a vasectomy after his fourth child with his wife:

“The procedure was a total relief, almost like the covid shot — like I’m safe now,” said Gress, who works in higher education. “I wanted to man up.”
———————————
Higher education? Like Advanced Underwater Basket Weaving? Look up moron in the dictionary and you’ll find his picture.

No one has a RIGHT to kill another human being except in self defense. Pregnancy is not an attack on the mothers life.

It can be, and when it is, abortion is justified in defense of the mother. But this is very rare, and no legislation currently proposed or foreseeable would affect such cases.

Works for me. These guys should get the ZPG award.