Trump:m“Devin understands that we must stop the liberal media and Big Tech from destroying the freedoms that make America great.” 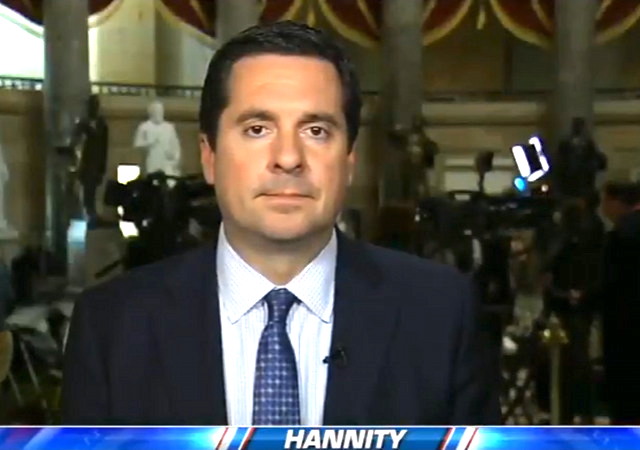 “The time has come to reopen the Internet and allow for the free flow of ideas and expression without censorship,” Nunes said in the statement. “The United States of America made the dream of the Internet a reality and it will be an American company that restores the dream. I’m humbled and honored President Trump has asked me to lead the mission and the world class team that will deliver on this promise.”

Trump announced Nunes will become CEO in January. It will have TruthSocial, a new social media platform, and other media outlets:

“Congressman Devin Nunes is a fighter and a leader. He will make an excellent CEO of TMTG,” Trump said in a statement announcing the hire. “Devin understands that we must stop the liberal media and Big Tech from destroying the freedoms that make America great. America is ready for TRUTH Social and the end to censorship and political discrimination.”

Nunes came to Congress in 2002. He will leave Congress as the highest Republican on the House Ways and Means Committee where he made waves defending Trump against those Russian collusion accusations.

Not sure if this is good news or bad news.

Why? Loss of the seat is less important than than breaking the spangle hold on flow of information we have right now. Most media closing their comment sections, all at the same time, was about stopping criticism. It was meant to give the impression that most people support their horseshit.

If, as the article suggest, the California legislature re-districting him out of his office, why not step aside and take a position with a company that might actually help conservative candidates get their message out before the mid-term election?

I doubt they’ll make much of an impact before the midterms. Building a web-scale software platform and then building a user base takes many years.

The loss of that seat could be critical if an opportunity comes to flip the House before the Midterm elections.

I think a strong presence in the legislature is moving on from being one of hundreds with a voice to being THE voice in an industry we all agree is extremely biased.

Sundance stated “a technology CEO with subject matter expertise in the U.S. intelligence system is a skillset to be appreciated.”, which I think is spot on.

it’s a pain to run every two years, especially in a state where state government is devoted to making your life and Truth itself tortuous. And the prize for winning re-election is you get to be ruled by a Stalinist from SF.

Nunes is a remarkable man. As is Trump, despite his Twitterstorms while POTUS.

So who’s watching the gerrymandering in CA?

Truth Social and Rumble will have terms of service (Rumble already does), that stifles free speech.

That Trump didn’t jump on http://www.Gab.com is a disgrace. He could have made a real difference in 2020 with such a move.

NOT A GOOD IDEA

Trump Social Business — good for Trump in short run. He will make $500+ million.

But it is not good long term.

I’m not against Trump. But Social-Networks work on scale. If you have a niche operation – it can never gain the scale it needs to be commercially viable. Trump appeals to a demographic that is very narrow. I doubt he will ever get more than 50 million users. SNAP is dying and it has about 100 million users. Also, most of Trump users will be over 45 years old. That is not a demographic that appeals to major advertisers.

The Trump social initiative is very risky for everyone – except Trump. Good business move for Trump – maybe not for anyone else.

Ah.. but even old people can hop from site to site, quick as a flea… I am still hoping it will be good. I have had my twitter account throttled for a long, long time. Ignore it.. but still, I hope for a better place.

About half the population supports Trump, and that number is increasing as Dems alienate more people. Current social platforms are also alienating people. Explain to me how Trump’s move is bad for any of us.

A profitable social media site can’t be just politics. Most young women are on social media all day and they aren’t discussing politics. And scale means billions of users – meaning international reach is required. Good luck with that.

I don’t expect Trump’s new social media site to succeed any more than most other social media startup attempts have ever succeeded. Mark Zuckerberg, Jack Dorsey, and the Google boyz were visionaries and first movers. They truly knew what they were doing to make a profit, and they move at the right time. Nobody else will ever compete with them in the same business. In a different business, yes, but not the same business.

Stupid move … Trump will eventually turn on him, chew him up and spit him out just like he has countless others.

Not a fan? Oh well. I think Devin can take care of himself. I hope this social network thing sinks twitter. That would be fun.

Nuts, as usual. Nuts and insanity.

If Nunes district is on the chopping block I understand why he is doing this and hope he has a worthy successor.

That said if all that Trump’s social media gives is an echo chamber (which is actually what appears to be happening) you aren’t looking at a very good thing.

The question is who is funding the new company to the tune of $1 billion? We don’t want the 2024 Republican presidential nominee to owe that to anyone.