Up to 8,000 Marines could be dismissed over Issue. 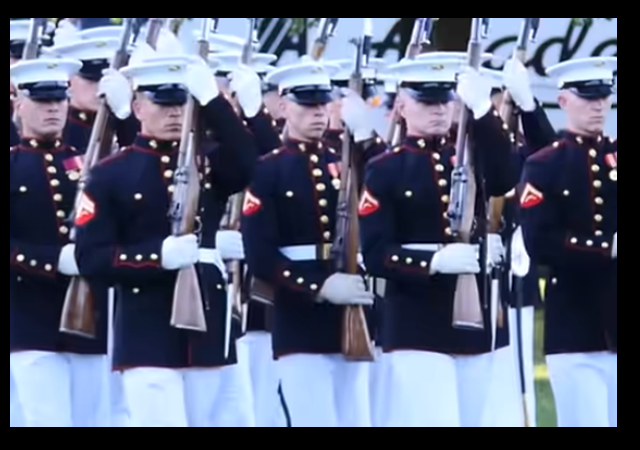 Early this month, we reported that over 100 US Marines were dismissed over their refusal to get a COVID-vaccination.

Marines now say they are being “crushed” by the Defense Department’s COVID-19 vaccine mandate, with the military declining all religious exemption applications.

Several active-duty Marines spoke to Fox News Wednesday and alleged that some of the Corps’ “best and brightest” were being forced out due to the requirement.

One lieutenant colonel told the outlet the Pentagon was looking to discharge members “as fast as they can and as brutally as they can, damaging every Marine as much as they can on the way out.”

The officer claimed they were warned by a colonel: “Tread very carefully, this is political, you will be crushed like an ant.”

“Do I want to continue serving in an institution that crushes people for bringing up reasonable points in defending their faith?” they asked.

Fox News Digital granted several Marines who refused to get the shot anonymity for the interview. They said they are witnessing a “political purge” by the Biden administration forcing out personnel who have deeply held beliefs they say are protected by the First Amendment.

There’s something fundamentally wrong at this point with our nation’s leadership,” said a major with more than 17 years of active service. “We are facing an unconstitutional edict that I think is very targeted as a political purge, taking out some of the best and brightest soldiers, sailors, airmen, Marines and guardians from the Space Force.”

…One master sergeant said it seems that “the louder I speak the tighter the screws are turned against me.”

“When you’re expected to behave a certain way and to obey certain rules and follow certain processes, and then to see on the other end that that’s not a two-way street, that’s a violation of my morals that I can’t stand by and not speak out about,” the master sergeant said.

The Marine Corps may end up dismissing as many as 8,000 Marines over vaccine refusal.

“To date, there have been 3,192 requests for religious accommodation concerning the COVID-19 vaccine mandate. At this time, 3,080 have been processed and zero requests have been approved,” Wood said in a statement. The Marine Corps Times previously reported that the corps had not granted a single religious exemption for a vaccine in the past decade.

Given this track record, it is unlikely that the 8,000 Marines facing separation will receive any exemptions. However, they will not be dishonorably discharged, as the Times noted that a recent defense provision requires “service members discharged for vaccine refusal to receive either an honorable or general discharge.”

Yet, despite robust vaccination, the virus still spreads.

Cases in the United States have reached a new high, with over 73% of the population at least partially vaccinated — just 7 months after Fauci said if 70% got vaccinated, we could entirely avoid a fall surge

This is why you have to listen to The Experts™ — they’re always right pic.twitter.com/lb5bH8WJDp

This order would be utterly senseless if one were interested in public health. However, as a political tactic, it appears that it may be a success.

I have a huge issue with civilian mandates, even though I am “boosted.” As retired military, I have little sympathy with active duty personnel being unwilling to be vaccinated. I lost track of the number of shots I was required to take over the years, and some of them were problematic then as well. As I remind non-veterans who complain about all the “great” benefits retirees get, when you join a volunteer military you sign a blank check to the government which can be cashed at any time for any amount up to and including your life. This is a small withdrawal from that account by any standard.

I served for 27 years. I was forced to take experimental anthrax vaccinations for the Gulf War. I understood that as the bad guys had that capability.

But being a friggin political engineering experiment for a buffet of unproven injections is well over the top.

Take your blank check and shove it up your ass. That check was written with the understanding that our lives would be spent defending our nation, not being lab rats.

Should have read the comments before responding; I brought up Anthrax as well.

As you capably point out, the military has a RICH history of poisoning service members – accidentally or even on purpose – with bad vaccines and other medical treatments.

That is a ridiculous analysis. So can they be order to submit for human experiments similar to a Tuskegee?

Some of those shots must have screwed up your brain house group. My trust level only extends as high as officers who live the same life as their 0300s. You must be a REMF.

Or one of those many shots he took was to his head.

Were you still in when we had the Anthrax vaccine debacle? You would have thought that DoD would have learned a lesson from that. Apparently not.

Keep in mind that every vaccine you received (and I recieved) while serving was NOT a novel vaccine technology. Vaccine technologies not named mRNA all predate your service (and you lifetime, as well).

The shots you took over the years were killed virus vaccines, which have been around since the 1700s, not experimental RNA injections foisted on the Marines by corrupt ghouls named Fauci, Biden and Wallensky.

Despite what you may personally believe about the vaxx, not all orders are valid and no military person is required to behave immorally.

Vaccination is a political, not medical or military necessity for this current administration, and military members are being required to participate in medical experimentation against one’s will, with a substance that carries huge moral issues.

The USA found this “problematic” at Nuremburg.

Great to hear that our boys have not succumbed to Mental Disorder.

I still say somebody patriotic ought to be vacuuming these valuable, trained fellows up for “alternative service.” We’re gonna need a helluva lot more than a “few” good men when the SHTF.

If someone does try, probably half would be FBI agents/informants (I’m sure they can phony the paperwork) and everyone involved would be arrested & charged with insurrection, rebellion, mopery, dopery, run through a kangaroo court and sentenced to at least life in prison. They’d likely take their kids from the family and possibly charge their spouse/partner/parents/adult children/etc with aiding and abetting.

8000 pissed off Marines are a very dangerous group. Have fun.

Now we know why they identified police and former military as the prime targets for be designated domestic terrorists. We could probably assemble a very effective resistance army with these guys. DeSantis is already making appeals for them and out-of-state police to come to Florida where they are more than welcome.

Silent spread? One of diverse reports. The vaccine therapies could play a role in personal protection and, perhaps, community immunity. but with excess adverse events, and resistance that wanes shortly with time and variants, neither a general nor exclusive part.

Demos-cracy is aborted in darkness… at the twilight fringe.

Our federal government has devolved into what is literally a giant operation of organized crime.

If Democrats are purging the military now, then when Republicans take back control of government they must purge politicians from the military. To fail to do so will be to leave the military commanded by Democrat loyalists instead of Constitution first last and only servicemen (and women).

IMO the DoD is on very shaky ground. Is Covid an actual threat to young, fit, healthy people as a general proposition? Clearly it is not in any variant. There is not a risk to the force from a readiness/capacity to fight standpoint when a fully vaxed crew is somehow infected and incapacitated a warship. What about the personnel who require quarantine and thus are unavailable? Vaxed and unvax can and do become infected with omicron and are both subject to quarantine. What about hospital utilization and unavailability of those personnel and the drain on the military healthcare system? Very few hospitalization among young, fit and healthy military population.

An interesting comparison to put this in perspective in terms of duty days lost, hospitalization and healthcare consumed in simple dollar terms would be very not PC; compare and contrast the # days personnel are not fully available for duty, healthcare consumed and money costs of pregnancy to Covid. The DoD doesn’t want to be forced into providing that information.

The military will not only be losing quality people who have undergone significant training at high cost but will also be forced to lower standards to accept or promote less capable replacements. For nothing other than spite. So far the DoD has granted more religious exemptions to Sikhs who wish to grow a beard than for the vax. As far as I am aware zero religious exemptions have been granted for Covid vax. The discovery phase for the ongoing litigation of impacted service members is going to be interesting. I can’t wait to hear the DoD defend zero exemptions using a generic refusal notice that seems to disregard individual claims as being distinct and worthy of review upon the individual claim.