I guess it’s easy to predict Kamala would turn to the failure that is Hillary Clinton because they all adore her so much. 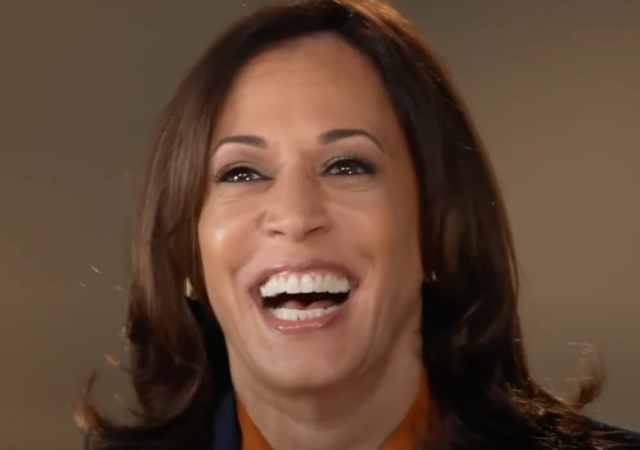 I need to check Babylon Bee more often whenever I write up something because this has to be like the hundredth prophecy to come true.

Kamala Harris claimed the media would treat her better if she was a white male. You know, it has nothing to do with her condescending snobby attitude and lack of personality.

Buried in The New York Times article is that Harris turns to Hillary Clinton for advice. I mentioned it in my piece, too.

Hillary said: “There is a double standard; it’s sadly alive and well. A lot of what is being used to judge her, just like it was to judge me, or the women who ran in 2020, or everybody else, is really colored by that.”

(No, people don’t like you, Hillary, and they don’t like Kamala, either. You both are despicable and disgusting people.)

I had no idea the Babylon Bee wrote a satirical article about Harris crying to Hillary in July!

The Babylon Bee piece is hilarious:

“First things first Kamala,” explained Clinton. “Next time you’re tempted to cackle uncontrollably, just call half of the U.S. ‘a basket of deplorables’ instead. Sure it’s divisive and unpopular, but it’s a step in the right direction for you.”

“Now let’s practice what to say when people hound you over and over for your inexplicable decision to avoid the border.” continued Hillary. “Repeat after me: ‘What. Difference. Does. It. Make.’ Say that and everyone will be off your case in no time!”

Hillary ran through several drills to try and help Kamala not cackle when she asked things like “are you a socialist?” or “why are kids in cages?”.

After realizing that strategy was hopeless, Hillary had to give up and try something else.

In a last-ditch effort, Hillary encouraged Kamala to start her own email scandal to keep everyone distracted and focused on something else. Hillary sighed, “Kamala, I know it sounds crazy, but if everyone’s talking about your emails and not your likability, you might finally see your public perception improve from where it’s at.”

These utterly miserable, corrupt, incompetent and insufferable crones/harridans/termagants/scolds/shrews/misandrists have no other mantra.

Leftists have this irresistible compulsion to regard cautionary tales — even satirical ones — as how-to guides.

And then they try to cancel the author of the satire.

She is out of her element. The power brokers have access to what age and sex child or adult they desire…many fresh across the border. At this point, showering with Brandon may be messy from..well. accidents. As for Hillary… that option ends nowhere or hopefully not Arkansas.

Hillary says coverage of Harris is “colored by” a double standard. “Colored”? Really? Are they listening to themselves?

When Santa exclaims to her, “Ho, Ho , Ho” is it a greeting or a recognition?

Ah yes nobody likes the cackling whore and she goes to a lunatic and proven looser for advice on how not to win friends and influence people, yeah that will work.

Stop embracing LGB Kamala… go full game and just self identify as one. Guaranteed positive press and instant assurance that 2026 belongs to you.

“When you lose, read a victory speech.”

“I know some good land deals in Arkansas.

“Invest in hog futures if you want to make some quick money.”

“Don’t forget to have someone on each side hold your arm when you’re drunk.”

“The bathroom is a good place to put your server.”

“If you want to go far in life, have your husband run for president before you do.

“Stay away from interns named Monica. And be suspicious if your husband starts buying a lot of cigars when he don’t smoke.”

“The bathroom is a good place to put your server.”
Seriously, I’ve had customers do that. And our “servers” at the time were the size of a 3/4 refrigerator. And they would have gotten away with it, too, except they installed them front-side into the stall, so they couldn’t see the red “check engine” light that warned them they were vulnerable to a crash if just one more part failed.

They are jockeying on each other, conducting emotional intelligence gathering on how to beat each other or get the other to play second fiddle to themselves. Female “office catfight” on steroids.

Let’s hope that Kamala doesn’t learn too much from Hillary. Joe may be in danger. Epstein didn’t kill himself.

Harris is now a rat swimming to a sinking ship.

I heard that VP Harris is considering Huma Abedin for her new Chief of Staff. She’s highly recommended by Hillary.