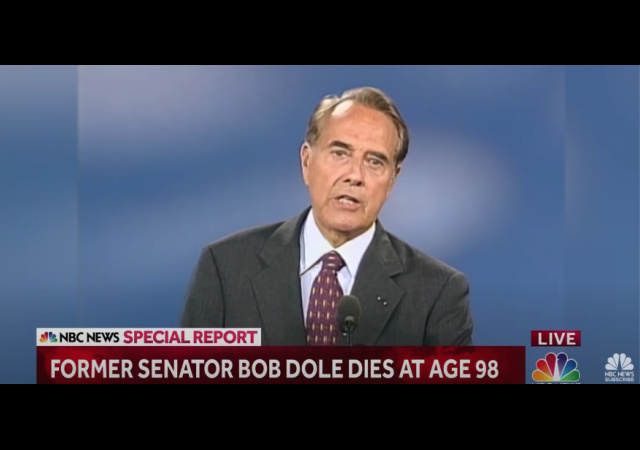 Longtime Kansas Sen. Bob Dole, 98, passed away on Sunday. He announced in February he received treatment for stage 4 lung cancer.

It is with heavy hearts we announce that Senator Robert Joseph Dole died early this morning in his sleep. At his death, at age 98, he had served the United States of America faithfully for 79 years. More information coming soon. #RememberingBobDole pic.twitter.com/57NtGfqtmL

Dole served in WWII. He lost the use of his right arm in Italy.

Dole served in the government for five decades. He was the VP candidate in 1976 and ran for president three times. The Republicans finally nominated him in 1996 against President Bill Clinton, who won re-election. Dole’s campaign was, to put it nicely, awful.

However, Dole became well known for speaking in the third person, and his thumbs-up while speaking.

How could anyone forget Norm MacDonald’s impersonation of Dole on SNL? Dole appeared with Norm!

Dole endorsed former President Donald Trump in 2016. He was the only former Republican presidential candidate to attend the convention that year in Cleveland, OH.

Dole was clearly an American hero and all-around great guy. However, his political tenure was something of a mixed bag exactly like his friend, John McCain. I thought it was interesting that he actually became a bit more conservative, and unapologetically so, after he lost to Clinton. These last 10-years, Dole was the kind of elder-statesman conservative giving vocal support to the emerging populist-conservative movement headed by Trump that the Bush family recoiled from.

In the end, I think Dole triumphed in his LONG rivalry with the Bush dynasty, which of course has become persona non grata with conservative voters.

“…that the Bush family recoiled from.”

Yes and I recoil from the Bushes. I am sorry I ever voted for those traitorous Rinos.

McCain to me was always a double-crossing backstabber and screwed Republicans over many times. I never got the feeling Dole was like that. He was not as tough on the Dims as he should have been, but McCain was not trustworthy at all. I always thought Dole was fairly trustworthy for a politician.

I think you summed it up nicely.

Sure, he “became a bit more conservative, and unapologetically so, after he lost to Clinton” and his active career was essentially over. It’s easy to be principled when there are no real-world consequences for your opinions anymore.

“I sat there with the majority leader and everybody else had gone home, and we made an arrangement. We let that [Brady] bill pass.”
Senator Bob Dole (R-KS), August 23, 1994, p. S.12363, Congressional Record

And his little airbag-mandating dog, too:

“It’s the right thing to do and I won’t shy away from the tough issues, even if some in my party don’t like it,” Mrs. Dole said Tuesday night.
“That includes issues like allowing people to carry concealed weapons. While that’s a matter for the states to decide, I think police work is hard enough already. No one should make it harder. I think it’s wrong to let people carry concealed weapons,” she said.

A few decades back, Bob Dole appeared on C-SPAN one day and talked about his political life. One of the funny asides he mentioned that day was about his start in politics.

At a Rotary Club-type dinner, Bob Dole was introduced as:

He went into the military, then sustained a head injury in Italy and then went into politics.

Former Republican stalwart will be voting Democrat from now on.

Our senator here in Kansas for about a million years. Even as a kid, I could disagree with some of his political opinions, but always supported him, and voted for him, because he was sane. (as opposed to a lot of politicians)

Dole was a hero for his service in WW2. While I disagreed with him often, I always believed him to be a decent and honest man.