Airlines have not sounded the alarm over Omicron as they did over the Delta variant. 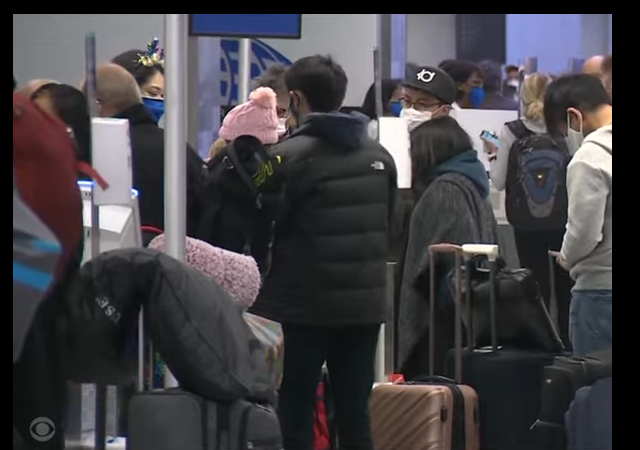 There are more and more signs that the pandemic is over for most Americans, even it is not for our media and some politicians.

The nation is back to traveling to be home for the holidays again.

And, egads…they may even dine indoors!

Debbie Rodriguez said she thought “long and hard” about canceling this year’s family Christmas trip to New York City before opting last-minute on Thursday to travel from Houston.

“We just decided we’re not going to live in fear,” said Rodriguez, 48, as she waited for luggage at New York’s LaGuardia airport with her husband and two children.

Rodriguez said her fully vaccinated family had planned to see the Rockettes’ Christmas show before it was canceled due to the COVID outbreak, so they will instead check out landmarks including the Statue of Liberty and Central Park.

On Christmas Day, they will dine indoors at a restaurant in Harlem away from the crowds, then visit the Empire State Building, she said.

And while the numbers aren’t quite up to pre-pandemic levels, TSA officials said the number of passengers recently screened at the nation’s airports is nearly double what it was a year ago.

It doesn’t seem like people are letting Covid or the rapidly spreading Omnicron variant ruin or change their holiday plans.

Interestingly, airlines have not sounded the alarm over Omicron as they did over the Delta variant.

In fact, some airlines have instead indicated that Americans are showing resilience and sticking with their travel plans.

There was likely a contingent of travelers expecting to fly this weekend who did not fly due to Omicron fears. While the total public health impact on Omicron is unclear thus far, it appears to have fewer implications for domestic travel compared to international.

Airlines have been a little more cautious on their outlook for the return of international travel, pending the ongoing impact of Omicron, which thus far seems to be more transmissible and could deter some travelers who are worried about being stuck overseas as a result of a positive test.

The airlines appear to be pulling back on masks in-flight, but I don’t recall them repudiating their demand for domestic flights to be vaxed-only, nor have they pushed back on masks in-terminal.

My fully vaxed nephew cancelled Christmas dinner at his house, he and his wife are both Covid +, after two tests…. He says he is over the worst of it… poor guy. He told me on the phone, not an hour ago, the vaccines don’t work.

That’s the irony: With every media report of someone fully vaxxed getting Covid they include, “Go get vaccinated if you haven’t already.”

Elizabeth Warren and Cory Booker said the same thing when they announced a few days ago that they had it.

I hope your nephew and his wife get better soon and with no aftereffects.

“With every media report of someone fully vaxxed getting Covid they include, “Go get vaccinated if you haven’t already.”
Not this guy.
Then again, he didn’t die “of COVID”… just the vax for it.

My brother works in a grocery store in the SF bay area….almost the entire day crew (17 people) are out with Covid and all are triple vaccinated. My brother has a slight fever and a sore throat….he is in day six.

I was hoping people would be staying home so I could have the slopes to myself but they flight and slopes were packed. I guess the pandemic is over even for the liberals.

Live your life.
Live not by lies.

Wife and I went to Cozumel last January. No cruise ships. Felt like we had the whole island to ourselves. Best winter vacation ever.

In one week we go to Negril, Jamaica. You can’t let fear ruin your life.