The complaint accuses rice of going to an apartment he believed Judge Regina Chu lived in and demanded she live stream the trial. 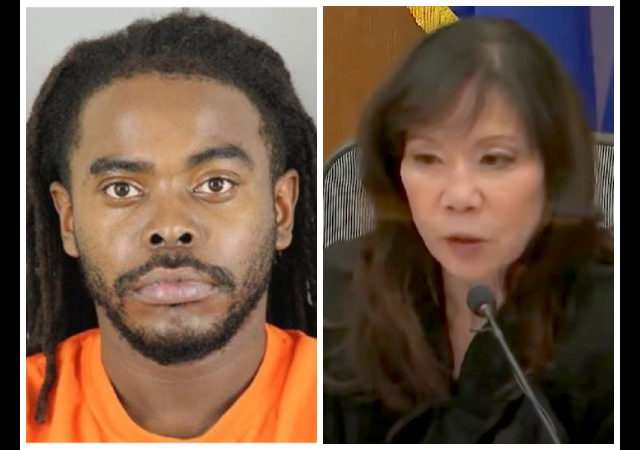 Authorities charged Cortez Rice, a Black Lives Matter protester, with aggravated violations, tampering with a judicial officer, and tampering with a juror after he allegedly tried to intimidate the judge in the Daunte Wright shooting trial.

Wisconsin State Police took him in custody on November 30 when officers pulled him over and found him “allegedly operating without a valid driver’s license.”

Rice is back in Minnesota after being transported from Waukesha County Jail.

Judge Regina Chu is presiding over the trial of former police officer Kimberly Potter. She faces manslaughter charges in the fatal shooting of Wright.

Chu did not want cameras in the courtroom. On November 6, Rice and other protesters went to an apartment building in downtown Minneapolis where they thought Chu resided.

From The Minnesota StarTribune:

The complaint was filed on Nov. 24 and kept from public view for nine days. The prosecution argued to have the charging document kept under seal because “public disclosure … may cause [Rice] to flee, hide or otherwise prevent execution of the warrant” for his arrest.

According to the complaint:

Rice entered the apartment building and went to the floor where he believed Chu lived while livestreaming on YouTube.

“We on her heels,” he was heard saying. “What she think … we want cameras. The people deserve to know.”

He was later heard saying on his livestream amid threatening and profane language, “We are here for one person in particular.”

He later yelled her name and said, “We demand transparency. We’d hate you to get kicked out of your apartment.”

Okay, so, this Rice guy. He seems to have been everywhere.

Rice gained attention after George Floyd because he claimed he was his nephew. I found videos on YouTube of outlets interviewing him as Floyd’s nephew! Floyd’s family eventually sent him a cease and desist letter.

Rice mentioned in his video that he knew someone in the courtroom during the Kyle Rittenhouse trial.

We're told Cortez Rice has been arrested on warrant in Waukesha County WI for jury tampering.

Remember, while he was at Judge Regina Chu's residence, he made a video about Rittenhouse jury.

We have verified that he is on the jail roster in Waukesha County.

How about this? Rice appeared before Chu in court on October 4th “in connection with a probation violation stemming from a conviction in 2017 for illegal weapons possession.” Chu allowed rice to continue his probation instead of sending him to prison.

So Rice already had a connection to Chu.

Not really sure how the demand to televise the trial is “juror tampering”. I am guessing there is more to this than just showing up to the judge’s apartment.

Cortez (funny, he doesn’t look like a Spanish explorer), has a remarkable gift for eloquence does he not?

He also doesn’t look like a Clark motor home.

Yes but Jussie Smollett says he could easily be mistaken for one on a cold Chicago morning.

When you ditch grammar class, it’s going to follow you,

Is there any benefit of the doubt that he wouldn’t try something like that again? Regardless, it’s what he’s charged with, not what he’s convicted of, so we’ll have to see.

I believe the juror tampering charge is for the Rittenhouse trial. Showing up at the judge’s (supposed) home is tampering with a judicial officer.

Who does he think this judge is, the mayor of Portland?

We got well-known wackjobs like this floating around “over state lines,” but our most important priority is being able to red-flag white grandpas.

Yet another case for public floggings.

Like Hong Kong, where young offenders are publicly flogged, and humiliation is a big part of correcting their attitude.

true. In HK, they disappear you

I recall the case of Michael Fay. He was convicted in Singapore in the mid 90’s for spray painting (vandalism). He got 6 strokes with the cain for spray painting 18 cars. I think if that were me, I’d have issues walking down the spray paint aisle at Home Depot for years.

This is what you get when you tell a class the rules don’t apply to them. Your reasons don’t matter it’s just your low expectation of soft bigotry. Time the rule applied to everyone equally again.

You got to be REAL DUMB to threaten a judge – let alone stalk a judge by going to their home (or what you believe to be their home) AND live stream this felony-in-progress for all to see.

If this were a white guy – he would serve at least 6 month in prison.
But, as a BLMer – he will likely receive nothing more than probation.

So a man is threatening a judge to rule a certain way. What’s new about that?

A couple of days ago Sen. Jeanne Shaheen issued a warning to the Supreme Court before just oral arguments that they better rule a certain way and she didn’t get in any trouble. So what’s the big deal?

Want to make them share a cell? I’m game.

1. Because she wasn’t attempting to intimidate the judges personally. She was merely publicly predicting a likely outcome if they should rule a certain way. If she’d called one or more justices and threatened personal consequences should they rule the wrong way, it would be different.

“If she’d called one or more justices and threatened personal consequences should they rule the wrong way, it would be different.”

So then, she would have had to do it like Schumer.

1. Milly I know you take things awfully literally but I believe the poster about was just being flippant with whataboutism for what the left tried to do to Trump (they accused him of tampering with judges before all of the impeachment theater and the incitement nonsense)

2. I think Congressional immunity only applies during session. She did this during a press conference I believe (or interview or whatever)

1. No, she was attempting to intimidate the justices with threats that the “revolution” will happen if they rule in a manner that is unacceptable to the woke mob.

2. Only if she is speaking in her official capacity on the floor of the Senate. She was not. She has no congressional immunity during personnel interviews. Just because a person is a “Senator” doesn’t mean they can say whatever they want, whenever they want.

Milhouse: Agree with your first point. Shaheen was merely stating what she expected the public reaction to an adverse-to-Roe ruling would be, not threatening any Justice. However, as her statement was in response to a reporter’s question during an event that was not a “Session” of congress, I doubt constitutional immunity applies.

Isn’t this article wrong? Wasn’t he charged for trying to tamper with the Rittenhouse jury? Not the one with judge boring.

Both, as I understand it.

Chu and Rice … could be a savory joke there.

I’m still looking for my Stevie Wonder album with “Ebony and Jade” on it.

He’s as stupid and feral as he looks.

70% feral, 30% food stamps, … same odds, 7/3, that his daddy’s daddy parlayed, except CRT, per ABA, supports for future generations to make

no “claims of rationality. It is an evolving and malleable practice. It perpetuates a racial caste system that elevates BIPOCS to the highest tiers.”

Critical Race Theory: An Examination of its Past, Present, and Future Implications

Wasn’t fentanyl floyd everyone’s uncle? Wasn’t watching him get murdered like watching your uncle getting murdered? Since we don’t allow victims’ family members to try defendants in court, shouldn’t anyone who considered him to be like an uncle have been stricken from jury duty?

He wasn’t ON the jury, he threatened to DOXX he jury.

I didn’t say anything about him.

when you see some turd like Schumer threaten justices by name, in their court, disrespecting both the men and the institution itself, what else can you expect from some thug like rice?

They must be concerned that the influence a approval of BLM is sinking to new lies. Now it’s apparent they are just there to line their own pockets.

What an ingrate. Judge Chu kept him out of jail and this is the thanks she gets?