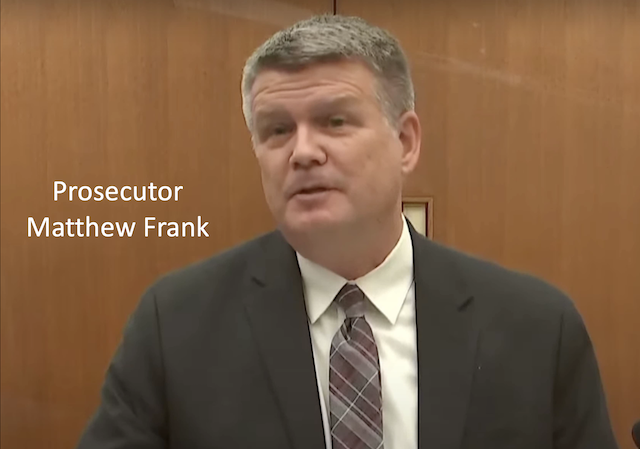 Welcome to our coverage of the Kim Potter manslaughter trial over the April 11, 2021 shooting death of Duante Wright in a suburb of Minneapolis, when then-police officer Potter accidentally used her Glock 17 pistol in place of her intended Taser.

Today saw an additional five jurors seated in this second day of jury selection, for a total of nine seated jurors.  Judge Regina Chu is seeking to have 14 jurors seated in total–12 to deliberate the verdict and two alternates. That naturally means that five additional jurors remain to be seated.

Juror #17, presenting as a young female who recently graduated from (I presume) college, went through voir dire in less than 9 minutes from start to end, with the end being having her seated as the fifth juror on this trial.

Indeed, the voir dire was so rapid, I have few notes of interest.

I did notice that Juror #17 had apparently written on her jury questionnaire that she didn’t know whether the jury system was fair, and when asked about this by ADA Matthew Frank her reason for this uncertainty was simply that she didn’t have enough information to know.  I thought that a perfectly reasonable position.

I also noted that Frank pressed her a bit on her willingness to apply the law as the judge instructs the jury, whether she likes it or not.  She of course agreed.

This is very normal, but coming from Frank in particular it reminds us that the State is trying to convince the judge to give a very loosely-defined recklessness instruction, one substantially lower than the normal burden of criminal recklessness. I suppose Frank wants to ensure that if Juror #17 feels ill-at-ease with finding criminal liability on such a low standard, she’ll apply the loose instruction regardless.

The voir dire of Juror #19, who presented as a black mother of three, a teacher married to a local truck driver, took substantially longer than had Juror #17, consuming a full 40 minutes.  The result was the same, however, with Juror #19 ultimately being the sixth juror seated on this trial.

Notable impressions of Juror #19 include that she owns both a “Taser” and, presumably, firearms—the presumption based on her acknowledgment that she possessed a license to carry firearms.  (The “Taser” is likely not a Taser-brand device, but a more common and less expensive “press-to-stun” electroshock device, based on her description.)

Particularly interesting to me was when pressed by ADA Frank on the gun matter, where he was asking if she owned guns just for personal protection, she indicated that the guns were also useful for sporting purposes, as a hobby.  In a lifetime of competitive shooting, I can say that women are far less represented in the sport than many of us would like, so it’s always nice to come across one.

Juror #19 had a somewhat negative impression of both Potter and Wright, based on news reports at the time and having seen the body cam video of the shooting event.

She did strongly disagree with the notion that police officers should not be second-guessed about decisions made in the course of their duty, expecting them to recognize that it’s a job of service to the public, a tough job, but that requires maintaining professionalism.

We can’t see any of these jurors, of course, but based solely on audio I’m guessing that Juror #19 is a black female.  When asked by the defense if she would have any difficulty returning to her community if she rendered a not guilty verdict, she indicated she would not.

Juror #21, presenting as a white male, was seated on the jury after only about 20 minutes of voir dire, before he was seated as the seventh juror on this trial.

Like many others, #21 comes to the trial with a somewhat negative impression of both Potter and Wright, again based on media reports and the body cam video at the time.  With respect to Potter in particular #21 brought a sense that her actions should have been more thought out. On the other hand, he also wrote in his questionnaire that he did not condone running from the police.

I definitely got a bit of a woke vibe from #21, although one that struck me as more passive—a result of immersion in a woke environment—rather than active.

For example, he had completely bought into the Black Lives Matter propaganda that there was a veritable plague of police killings of young black male suspects, when in fact such events are extremely rare outcomes of police interaction with a young black male suspect. When pressed slightly by defense counsel Gray, however, he conceded he had no factual basis for this belief, no statistics or studies.

Juror #22 presented as a white male in his late 50s or early 60s.  He works as a registered nurse and is studying to become a nurse practitioner.  After about 25 minutes of voir dire, he would be seated as the eighth juror in this trial.

He came to this trial with a neutral impression of both Potter and Wright, based simply on having insufficient information to make an informed impression.  That certainly struck me as reasonable enough.

He did have an initial sense that Potter had made an error, but that’s hardly arguable, really.  The issue at this trial is the degree of culpability, if any, for that error.

When informed by defense counsel Engh that Potter would be testifying, and asked if he would wait to hear her testimony until forming an opinion on a verdict, he agreed that he would.

On voir dire by the State we learned that Juror #22 owns guns, but apparently only shotguns for duck hunting, a longstanding family tradition.

He agreed with the statement that the police help keeps the community safe, and even somewhat agreed that it was wrong to second-guess the police about decisions made in the course of their duties.  At the same time, he expects them to be law-abiding in making those difficult decisions, too.

Juror #26, presenting as a young woman, spent just over 30 minutes in voir dire (most of that by the State) before becoming the 9th juror seated in this trial.

She indicated only moderate impressions for both Potter and Wright.  She also had a family with strong opinions on the case, although she didn’t indicate which way those lean, and told the court she’d be able to not let family opinions influence her.

To my ear #26 came across as fair and impartial, and strong-willed.

She has a brother on active duty in the Marine Corps., and believes both Black Lives Matter and Blue Lives Matter are properly just ways for groups of people to voice themselves to the greater community.

Both the State and defense made use of peremptory strikes again today.  I won’t cover these stricken jurors in detail because they’re no longer relevant to the case, but for those of you interested in seeing what kind of prospective jurors are removed by each side using their peremptory strikes, here is the voir dire of those stricken.

Juror #28: Struck by the state

Juror #32: Struck by the State

This was the State’s third and final peremptory strike, with five jurors still needing to be seated.

Be sure to join us at Legal Insurrection tomorrow morning for our ongoing LIVE coverage—including real-time commenting and streaming of the trial proceedings, and then again at day’s end for our analysis of the day’s events.

And that’s all I have for all of you at the moment.