Plaintiffs’ Attorney: “The District Court’s order would lead to absurd results. Schools might find out at the end of our case that Colorado’s law forcing them to change their name was unconstitutional all along.” 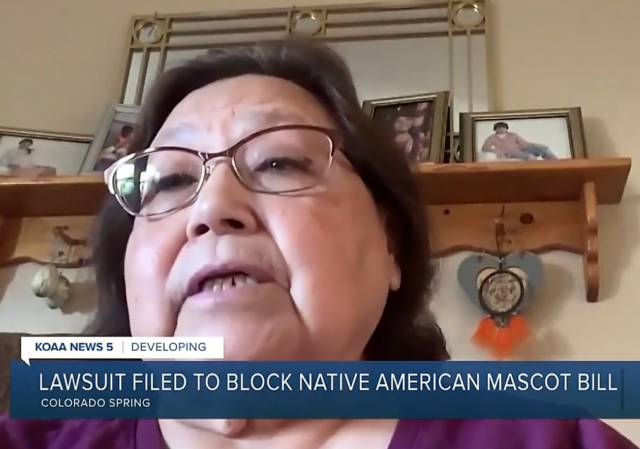 We previously reported on a lawsuit by a Native American group and individuals seeking to halt implementation of Colorado’s ban on Native American school mascots, claiming that the law unconstitutionally singled out Native Americans for adverse treatment as to mascots.

The banning of Native American (American Indian) depictions for sports teams gets a lot of press, most famously the Washington Redskins renaming themselves the Washington Football Team.

There’s a side to this issue that I had not thought of, but is argued in a lawsuit just filed in Colorado. That when the government is involved in such name bans, it is discrimination against American Indians because it deprives them of the ability to have things named after them. It is, according to the argument, the worst form of cultural appropriation, more like cultural deprivation.

In Colorado in 2021, legislation was passed banning the use of American Indian mascots, broadly defined. Now the law is being challenged in a lawsuit filed on November 2, 2021, on behalf of the Native American Guardians Association (NAGA) and individuals by the Mountain States Legal Foundation, which summarizes the case on its website:

This is a civil-rights action, filed in the U.S. District Court for the District of Colorado, challenging the constitutionality of SB 21-116.  SB 21-116 is a bill passed by the Colorado State legislature in 2021 which purports to prohibit the use of American Indian “mascots” by public schools and public institutions of higher education, as of June 1, 2022. Schools that don’t comply with the law face a $25,000 per month fine, for each month that the school continues to use a prohibited image or name after that date. The Native American Guardians Association and its members believe the law violates their First Amendment and Fourteenth Amendment rights, as well as Colorado Constitution’s Free Exercise Clause and Colorado Constitution’s Free Speech Clause, the Civil Rights Act, Title VI and Title IV.

On December 1, 2021, the federal district court denied a request for an emergency injunction, ruling that there was no emergency since the ban only became effective on Jun 1, 2022:

In their motion, the Plaintiffs ask this Court to “issue a preliminary injunction barring Defendants from taking any actions to enforce [SB 21-116].” ECF 4 p. 2. However, in the very first sentence of their motion, the Plaintiffs admit that “the deadline to change Native American icons and imagery covered by SB 21-116” is June 1, 2022. Id. There is no indication in any of the Plaintiffs’ briefing that the Defendants are currently enforcing SB 21-116 or that they intend to do so in the immediate future. The Plaintiffs are thus requesting this Court to issue an “emergency” order preliminarily enjoining action which is not being taken and which will not immediately be taken. The function and purpose of a “preliminary injunction” is to prevent irreparable injury pending an ultimate determination of the action. See Marine Cooks & Stewards, AFL v. Panama S. S. Co., 268 F.2d 935, 935 (9th Cir. 1959). The Plaintiffs here have not established that they will suffer any immediate injury pending the ultimate determination of this action because the statute at issue will not be enforced for another six months.1

[1 Indeed, the Plaintiffs acknowledge in their motion that “it is possible that the Defendants will agree to a case scheduling order that largely resolves the issues in the case prior to June 1, 2022.” ECF 4 p. 20]

The November 30, 2021 deadline on which the Plaintiffs rely to support this “emergency” request is not tied to the relief requested. The Plaintiffs request that the Court enjoin the Defendants from enforcing SB 21-116. November 30, 2021 is simply the date by which schools need notify the Building Excellent Schools Today (BEST) ofan intent to apply for funding to remove American Indian mascots. The November 30, 2021 deadline has no bearing whatsoever on the enforcement of the Act. The Plaintiffs argue that they will be harmed if the Court does not issue a preliminary injunction prior to November 30, 2021 because “a transition to a new school  name or logo is expensive, and [] it will be next to impossible to return to such a name if relief is granted after June 1, 2022.” ECF 4 p. 19. Such speculative harm, however, cannot form the basis for a finding of irreparable injury. “Irreparable harm” means that the injury “must be both certain and great.” Prairie Band of Potawatomi Indians v. Pierce, 253 F.3d 1234, 1250 (10th Cir. 2001). Further, the harm alleged would constitute harm to the schools, not to the Plaintiffs themselves.

Plaintiffs have filed a Notice of Appeal. The issue seems to be that the district court judge considered the November 30, 2021, deadline to be meaningless, but the plaintiffs filed a Declaration that schools need to make a decision by November 30, so the deadline is legally significant:

“Recently Arickaree School District R-2 received a letter from the Colorado Commission of Indian Affairs (the “CCIA Letter”). Notwithstanding the deadlines for compliance set forth in SB 21-116, the CCIA Letter demanded that “All districts and charter schools must notify BEST of their intent to apply by November 30, 2021.” (Emphasis added). ”

Plaintiffs’ counsel Scott Cousins provided the following statement in response to our request for comment:

“The District Court’s order would lead to absurd results. Schools might find out at the end of our case that Colorado’s law forcing them to change their name was unconstitutional all along. But by that point it will be far too late. We filed our appeal yesterday and expect to file a motion for injunction pending appeal, hopefully by end of next week.”

name a ski slope Squaw Mountain (that was a thing here in maine) and bet they would be happy with banning it though.
hypocrisy knows no race….

I think the Dept of the Interior already has that on its radar–my understanding is that they are going to be coming up with a list of public places with bad names, and rename them–can’t wait to see the list and the proposed name changes.

Same here for Squaw Peak in Phoenix. But then they also had to rename Squaw Peak Parkway, the Hilton Squaw Peak, and every other landmark with Squaw Peak in its name… Everything is now Piestewa Peak, which the locals blithely ignore and continue to say Squaw Peak.

Exactly and no one born after 2005 can tell you why it was renamed to Piestawa Peak anyway. Squaw Peak is just easier to say.

There is a whole list of things the Dept of the Interior plans to rename. They may be stuck renaming Grand Teton National park. (Translate Grand Teton from the original French.)

yup. sexist. unless those mountains were actually born male and identify as female…. then to change the name would be transphobic

No one could be more Native American than Ralphie . Seems like he should be filing suit for something or other.. maybe to get him off the nickle.

About fifteen years ago the town of Blacksburg, Virginia changed the name of its high school sports team from the Indians to the Bruins. They said that the name ‘Indians’ was insulting. Many of the local Indians who had graduated from the high school protested strongly. They said that they felt honored that the teams were called ‘*Indians” Their protests were ignored and the name was changed. I think that the opinion of the local Indians should have been respected.

The left doesn’t do respect.

You did not help matters using “trump” in a sentence, “he-who-must-not-be-named”.

This lady‘s complaint isn’t going anywhere. She is in fact herself Native American, or Indian, or first nation, whatever it is we’re supposed to say this week. She is not however a Concerned White Woman ™. That’s why her complaint will go nowhere.

Maybe they need to hire the law firm of Skhrieking Shrike, Demands to Speak With Manager, Scolds in Loud Voice, and Always Has to Get Her Way, PLC.

Many of the native tribes actually revere the bear. They see them as a being of wisdom and knowledge.

Bears never stretched anybody on the rack for lack of belief.

The left destroys everything

I was on a two lane highway traveling across one of the southwestern states. I believe it was New Mexico, and it was reservation territory.

I drove past their high school and they were the Braves.

As I’ve said in another comment here, and in comments made on other threads, it seems only Concerned White Women(tm) that have a problem with these names.

Correction: I just remembered. They weren’t the Braves. They were the Redskins. And the team logo was not a potato.

The Santa Fe Indian School was one of the infamous Indian Boarding Schools started by the fed in order to “assimilate” Indian children. It’s now owned and controlled by the 19 Pueblo Governors of New Mexico and their athletic teams are called the Braves (or Lady Braves).

Wait until they find out what Oklahoma means.

Why? Are the population of Oklahoma Oklahoma-sexuals?

It’s Choctaw for “just dump it by the trailer park.”

Hubby and I were visiting Santa Fe and I saw some women in the park selling things. I went over to their tables and looked at their work. I said something about Native American art work and was immediately chastised. I was told they didn’t call themselves that, they were American Indian! One of them told me that I was Native American! (Actually I was born in Australia).

Indigenous by geography. Native by jurisdiction. I’m surprised she would use “American Indian”. They honor traditional references including nations, tribes, as much as “Hispanics” or “Latinos” (Europeans, etc.) honor national references. Although, to her credit, she does distinguish between Indians in America and Indians in India.

Yes. There is a difference between the casino Indians, and the C store Indians.

Activists prefer Native American. I live near a Pueblo and they refer to themselves as Indians.

While you probably meant “deprivation” there, I concur that the whole situation is pretty depraved.

Why is it that it’s always the fattest, homliest dumbass who complains about stupid things?

I think I answered my own question. Ignore these people.

I hope they eventually win.

Seems like the Leftists are trying to wipe the slate clean . . . again.

I shouldn’t like to inquire too closely into the case of the tenth.

William A. Jacobson: That when the government is involved in such name bans, it is discrimination against American Indians because it deprives them of the ability to have things named after them.

As we pointed out in the previous thread, that is not correct. The Colorado law specifically allows, “Any such agreement entered into pursuant to this section between a public school and a federally recognized tribe may allow any American Indian mascot that is culturally affiliated with that federally recognized tribe as determined at the discretion of the tribe’s governing body.”
https://leg.colorado.gov/bills/sb21-116

The law was passed in consultation with Colorado tribes.
https://ccia.colorado.gov/sites/ccia/files/documents/CSAIRPS-Report-2016_0.pdf

time for the parties to relax and open a cold one

What will they use then? Should they use WHITE nicknames? How about the “Hawaiian Honkies” or Florida State Sodum Crackers (I was actually called a “damn white sodum cracker” by a black person when I was a teenager! Indian related mascots are used because of their heritage of warrior and rugged natures! At least they don’t come after the “Fighting Irish” – evidently no racial animosity over that one!

I think you meant “deprivation”, but on second thought, the “sensitive” among us who seek such a ban are most definitely depraved.

Banning the use of Indian names on anything effectively erases them from contemporary life and eventually, history.

Perhaps that would be a good object lesson?