“The dystopian machine can identify ‘dissent’ against the state and suggest sentences for supposed criminals, removing people from the prosecution process.” 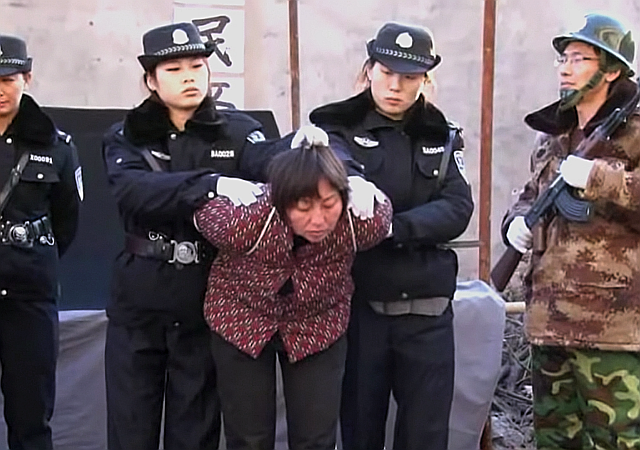 After creating the world’s largest surveillance network, China has deployed an advanced artificial intelligence (AI) machine to run its judicial system. The state-run judiciary developed the AI machine and has been tested in the eastern Chinese city of Shanghai, the Hong Kong-based newspaper South China Morning Post reported.

This is not the first AI tool used in the Chinese courts. “Prosecutors in China already use an AI tool to evaluate evidence and assess how dangerous a suspect is to the public,” the Hong Kong daily added.

The newly-unveiled AI ‘prosecutor’ can recognize anti-regime dissent and suggest punishment based on the Chinese criminal law. “The dystopian machine can identify ‘dissent’ against the state and suggest sentences for supposed criminals, removing people from the prosecution process,” the UK newspaper Daily Mail noted.

Researchers in China say they have achieved a world first by developing a machine that can charge people with crimes using artificial intelligence.

The AI “prosecutor” can file a charge with more than 97 per cent accuracy based on a verbal description of the case, according to the researchers.

The machine was built and tested by the Shanghai Pudong People’s Procuratorate, the country’s largest and busiest district prosecution office.

The technology could reduce prosecutors’ daily workload, allowing them to focus on more difficult tasks, according to Professor Shi Yong, director of the Chinese Academy of Sciences’ big data and knowledge management laboratory, who is the project’s lead scientist.

“The system can replace prosecutors in the decision-making process to a certain extent,” said Shi and his colleagues in a paper published this month in the domestic peer-reviewed journal Management Review.

The introduction of the advanced artificial intelligence prosecutor comes as China has established the world’s largest spying network to monitor and regulate the behavior of its population. The Chinese Communist Orwellian project uses more than half of the world’s surveillance cameras to spy on 1.4 billion Chinese people. Besides cameras, Beijing uses facial recognition, smartphones, and e-commerce data to keep track of the everyday activities of its ordinary citizens.

Besides targeting dissidents, the artificial intelligence-aided surveillance is used for ‘behavioral engineering’ the country’s population. Xi Jinping’s regime is resorting to mass surveillance, not just brute force, to ensure loyalty to himself and the Communist Party.

Beijing is not limiting artificial intelligence to commercial and domestic spying operations. Recent studies suggest that the Chinese military is betting big on AI and other emerging technologies. “The Chinese military and China’s defense industry have been pursuing significant investments in robotics, swarming, and other applications of artificial intelligence (AI) and machine learning (ML),” a 2020 report by the Brookings Institute said.

Beijing is using artificial intelligenc in a myriad of military-related applications. A recent report by the Center for Security and Emerging Technology, a think tank based at Georgetown University, “found that the Chinese military is ‘intelligentizing’ warfare by purchasing AI systems for all manner of applications, including … intelligence analysis, decision support, electronic warfare and cyber operations,” Politico reported in October.

Who needs artificial intelligence? We have Nancy Pelosi and her Democrat committee to identify dissent and punish it.

There was a reference to AI Judiciary in this December Global Conference on AI and the Rule of Law https://www.aiathens.org/ . It reminded me of the Chinese concept of Tianxia that I had warned about. It also fits with how dissent from authorized beliefs is becoming taboo all over the world.

https://www.invisibleserfscollar.com/tianxia-aligned-to-thinking-of-the-person-as-a-platform-physical-psychological-and-social/ It also clarifies what used to be the distinguishing factor between authoritarianism and totalitarianism.

Authoritarianism sought to control behavior. Totalitarianism seeks to control internalized beliefs and values and gets at the very basis of human decision-making. That’s what Big Data, AI, and global standards including K-12 learning standards are really manipulating.

Well yeah, but at least the Chinese version has some “intelligence”, albeit artificial. Ours has none.

China’s toy has “intelligence” in the same manner as Pfizer and Moderna have “vaccines.” It’s just a word they borrowed and abused to lend their scam legitimacy.

We have Fakebook and Twatter. TikTok is a Chinese owned operation.

Who needs an AI when you have willing apparatchiks in social media?

Bah! They are slow to the dance – Facebook already has algorithms determining who is guilty of dissent and imposing sentences as well.

Zuckerberg helped them develop it. All while gutting out elections.

Historically these Big Brother style surveillance states have collapsed because they stifle individual initiative. Let’s hope the rule holds true in this case.

Hope not. New Zealand, Austrailia and the UK have become surveillance states and the US is not too far behind.

Flood the Chinese internet with artificial intelligence dissenters. It’s the analogue of a denial of service attack. Too many leads to follow.

Coming soon to a judicial system near you.

Mass surveillance and punishment seem to indicate that the Chinese people are not totally sold on the joys of Communism.

My question? Will they call it Skynet or HAL 9000?

My God! So you’re the other person who remembers that movie?

Hurrah! Now they have pre crime, Judge Dredd, Robocop in place. Can HAL or skynet be far behind? /

I’m guessing you haven’t watched the video embedded in the story.

The face of tyranny always starts out cute.

Coming soon to a Soros-funded prosecutorial office near YOU!

Adam Schiff has to be SOOOOO jealous!

I suppose as long as the AI prosecutor, judge, and jury always find the defendant guilty, it will be considered a major success.

Hold up! The Chinese actually named a project “Skynet”?

Told you we should have had Zuck neutered.
Now it’s too late.

Did this Chicom project have help or inspiration from US media giants?

This is scary sh!t.

Calling it “artificial intelligence” is sort of gilding the lily. Here is how the “AI” algorithm works:
1. Has the suspect been accused of crimes against the Communist regime?
2. If No, then innocent. If yes, then guilty.

Sort of the same thing they did during the Cultural Revolution, only this time, with computers.