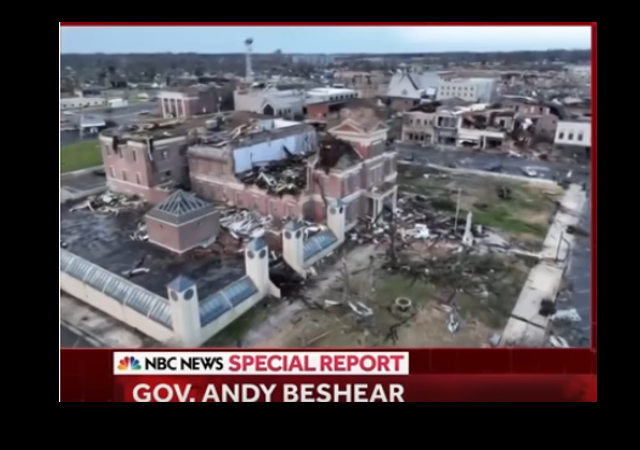 Emergency aid has been ordered for Kentucky to supplement local recovery efforts after storms killed as many as 70 as tornadoes and severe storms slammed the Midwest this weekend.

Biden ordered the Department of Homeland Security and the Federal Emergency Management Agency to coordinate disaster relief efforts in several Kentucky counties and said he stood “ready to do the same for the governors of other states.”

The president told reporters Saturday he will ask Congress to approve the necessary funding, calling the devastation “profound” and a “tragedy” which is “likely to be one of the largest tornado outbreaks in our history.”

Beshear, at a late afternoon news conference, offered a dire assessment of the situation at a candle manufacturing factory in Mayfield, Ky., that was destroyed on Friday night. Officials said 70 people remained missing at the facility, but the governor indicated he was not optimistic after touring the devastation.

One tornado cut such a wide swath through the country that it has earned its own name. One town struck by the swarm of tornadoes was obliterated.

One tornado, being called the “Quad-State Tornado” ripped across four states in four hours (Arkansas, Missouri, Tennessee and Kentucky), slamming communities such as Monette, Arkansas, and Mayfield, Kentucky, which were two of the hardest hit towns.

There were at least eight tornado emergencies issued, a designation which is reserved for the most life-threatening tornado events when a confirmed large and dangerous tornado is headed toward people.

The tornado that devastated the town of Mayfield was produced by a parent thunderstorm that traveled more than 230 miles across four states over the course of four hours.

The St. Louis area was also hit by the wave of storms, and now 6 Amazon workers were confirmed dead after a series of tornadoes roared through a warehouse, ripping off its roof and causing 11-inch thick concrete walls to collapse on themselves.

Six of the fatalities happened at the partially collapsed Amazon fulfillment center at 3077 Gateway Commerce Center in Edwardsville, which was damaged Friday night as violent weather rolled through the region.

An 84-year-old woman also died in St. Charles County when her Defiance home was blown off its foundation.

In Pemiscot County in the Missouri Bootheel, a young child was killed at home and at least nine people were transported to hospitals, The Associated Press reported.

Among those who died at the Amazon warehouse was Clayton Lynn Cope, a 29-year-old maintenance worker. His mother, Carla Cope told the Post-Dispatch that she was on the phone with Clayton right before the building was hit and urged him to get to shelter. As soon as she realized the storm had hit the warehouse and there was a debris field, she left their Brighton home for Edwardsville at about 9:30 p.m. and waited for news. She learned her son had died at about 4:30 a.m. Saturday, about eight hours after a tornado hit the building.

Jeff Bezos, the Amazon founder, was castigated on social media for failing to acknowledge the tragedy in Edwardsville while celebrating his latest group of space tourists in an Instagram post. He has now responded.

“The news from Edwardsville is tragic,” he finally said in a statement on Twitter at around 9 p.m. “We’re heartbroken over the loss of our teammates there, and our thoughts and prayers are with their families and loved ones.”

“All of Edwardsville should know that the Amazon team is committed to supporting them and will be by their side through this crisis,” the post continued. “We extend our fullest gratitude to all the incredible first responders who have worked so tirelessly at the site.”

May God lift up all the families impacted by these storms and watch over the responders who are aiding in the recovery efforts.

Looks like tornadoes are no longer the fault of Donald Trump, because not even dead Democrat voters would buy that one anymore.
Now they’re all Rand Paul’s fault.

The Dems don’t care about the difference between weather and climate, so they blame everything on climate change. Before long, I expect them to blame the decreasing size of Jupiter’s red spot on climate change.