“The University takes seriously any alleged violation of our Community Standards” 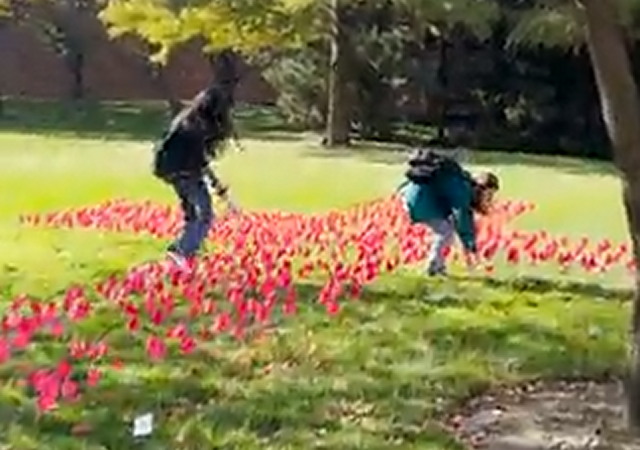 St. Louis University is a Catholic school, so who looks out of step here?

A Missouri university has opened an investigation after video footage surfaced capturing students defacing an anti-abortion memorial on campus.

St. Louis University opened an investigation after it became “aware” of an incident involving the destruction of a display designed to commemorate lives lost to abortions, a representative for the university told the Washington Examiner. The university is described as one of the “oldest and most prestigious Catholic universities” in the nation, according to its website .

“The Office is conducting an investigation of the report,” the spokesperson added. “The University takes seriously any alleged violation of our Community Standards, and has policies and processes in place to address concerns when they are reported.”

SLU’s campus chapter of Students for Life filmed two videos showing students ripping out red flags from a memorial meant to remember the lives lost from abortion. There were 1,000 flags set up, each one representing 800 abortions, signifying a total of 800,000 abortions , Fox News reported.

"…you have no right to have an opinion!" #tolerance pic.twitter.com/pZbjMqZgaP

Dang shame the Students for Life didn’t wire those flags up to an electrical source. Know what I mean?

Or at least a messy glitter bomb.