“Striking graduate students refused to teach their course sections, resulting in many undergraduate sections being canceled.” 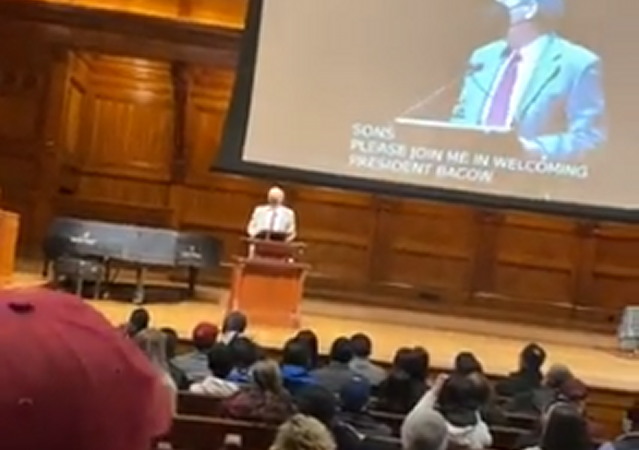 This protest makes the students sound like an Occupy Wall Street rally. It’s being done to support the grad student union. This really should have no place in higher education.

First-year students at Harvard University walked out of University President Lawrence Bacow’s speech at Parents’ Weekend today as a show of solidarity with striking graduate students.

The Harvard Graduate Student Union began its 3-day strike on Oct. 27 to push for higher pay, better benefits, and additional protections from harassment and discrimination. Striking graduate students refused to teach their course sections, resulting in many undergraduate sections being canceled.

Harvard had attempted to stave off the strike by putting forward a proposal for the union’s consideration. According to an email from the provost obtained by Campus Reform, the university had offered to immediately raise the minimum wage for student workers to $20 per hour, paying $1.8 million more into the benefits pool, and allowing more student workers to access benefits. However, the strike continued for all three planned days.

🚨🚨🚨First-year students stage a walkout from President Bacow’s address at Parents Weekend in solidarity with student workers. Here’s what they had to say ⬇️ #HarvardonStrike 🚨🚨🚨 pic.twitter.com/Cw4lJiztmN

Being an old Ivy League grad (don’t think Brown, puleeze), I guarantee you can find better courses and profs at the University of North Dakota (Grand Forks)

Lemmings immersed in leftism, plus cowards surrounded by leftist peers and camouflaging themselves..

Having been a Teaching Fellow at Harvard for five years, I find this whole situation to be ludicrous. The report says “first-year students” walked out, which (in Harvard-speak) means first-year graduate students, medical students, law students, or business students. But the video looks like freshmen are yelling and making a fuss at Parents’ Weekend, probably doing exactly what they were told by the upperclassmen and grad students.

The idea of grad students striking for better pay is amusing. Historically, grad students got a tuition waiver and a pittance to live on ($2400 per year when I was there). If you could complete your PhD without going into debt, then you had accomplished your goal. Being a TF was not a job, but part of your deal with the university to get your degree. I managed to graduate with a little bit of savings tucked away.

The only strike I saw at Harvard was the student strike when Nixon started bombing in Cambodia. The idea of Harvard students cutting classes scared Nixon so much that he stopped bombing Cambodia and resigned the Presidency. At least, that’s the way the students saw it. No one ever accused Harvard students of having underdeveloped egos.