“It is weaved in and out of the curriculum. In fact in 2015, former governor, who was just defeated, McAuliffe, his state board of education had information on how to teach it…” 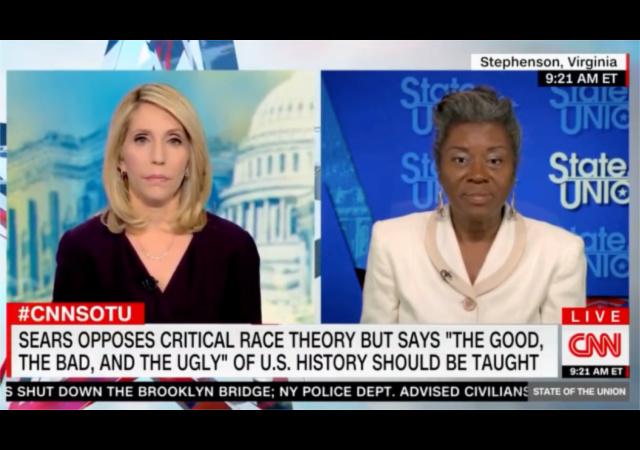 I hope Virginia’s Lt. Gov.-elect Winsome Sears stays in politics. I like her toughness.

Sears shut down Bash in a heartbeat:

SEARS: “No, no, it is part of the curriculum. It is weaved in and out of the curriculum. In fact in 2015, former governor, who was just defeated, McAuliffe, his state board of education had information on how to teach it, so it’s weaved in. So you know, it’s semantics, but it’s weaved in. What we want to say and what governor-elect Youngkin has said is that all of history must be taught, the good, the bad and the ugly because what we learn from history, Dana, is that we don’t learn from history and we continue to repeat the same mistakes. But while we’re talking about history, how about we talk about how people, from the 1890s, black people from the 1890s to about 1950 to 1960 according to the U.S. census marrying in a percentage that had far surpassed anything that whites had ever done. When we talk about the Tulsa race riots, let’s ask ourselves how did the black people amass so much wealth right after the Civil War, so that it could even be destroyed? How do they do that? You know, they were coming from nothing, from zero, some of them never even got the 40 acres and a mule. Let’s try to emulate that. The one thing that the slaves wanted, well, three top things, their freedom certainly, then the next thing was they wanted to find their families and the third thing was they wanted an education, and my God, when did education become a bad word among black people? No. We are going to have a good education system.”

Winsome Sears corrects Dana Bash when she claims that CRT isn’t part of the curriculum in VA pic.twitter.com/HbIYwcmVfq

I would say that disrespect for education among some blacks started increasing in the sixties, especially in cities. That also started at a lower rate with poor white people, with both groups setting themselves up for a lifetime of failure. he percentage of blacks as a whole was much higher than with whites.

Theodore Dalrymple (Anthony Malcolm Daniels) writes of the spread in the UK of lower-class or underclass pathologies from whites to ethnic and racial groups previously immune to them. Interesting reading from someone who’s actually worked with the subject matter of his books.

Clearly, England’s underclass and America’s are quite different, from someone who actually witnessed what happened in America.

“Oreo (n.) As a derogatory word for “black person felt to have a ‘white’ mentality,” 1968, African-American vernacular.”

“Martin Luther King Jr., an African-American clergyman and civil rights leader, was fatally shot at the Lorraine Motel in Memphis, Tennessee, on April 4, 1968…”

It’s not a conspiracy theory if you were there when it was happening.

“Explain how you think race should be taught”

What the hell does that mean?

It should be taught so people… persons understand, and most do without instruction, that diversity [dogma] (i.e. racism, sexism, ageism, and other class-based bigotry) is a liberal (i.e. divergent) construct with progressive (i.e. monotonic) consequences. #NoColorJudgments #NoSemanticGames #HateLovesAbortion

I believe that according to the Dhimmi-crats’ own idiotic lexicon, Dana Bash was attempting to “whitesplain” to the awesome Ms. Sears. She got schooled, accordingly.

She is a STAR

LEFT WILL ATTACK HER MERCILESSLY

I think she can hold her own.
Praying she makes a huge dent in the divisive crt push.

Life was so much simpler ones CRT stood for cathode ray tube, PC stood for either printed circuit or personal computer, and words ment what they said.

Poor handling of a CRT was likely to lead severe laceration’s or worse.

And now you can’t even take one to the recycle station without paying them.
Ah, such a metaphor-rich environment.

And STD stood for Subscriber Trunk Dialing (aka “direct dial”)

And LOL was Limitation of Liability.

That’s part of the problem: CRT isn’t taught in the schools, CRT is taught to the teachers. It’s a pedagogical framework for injecting race hustling into every possible subject. This is how the school boards and bureaucrats can say “no, CRT isn’t being taught in schools” with a straight face.

This is true. The idea that CRT isn’t taught in grades K-12 as a distinct subject is a red herring. The reality of “Critical Pedagogy” flies under the radar.

Teaching for “social justice” is a cruel hoax on disadvantaged kids.

“…But that was just half the wonder of it. Ayers would soon go on to disprove thoroughly F. Scott Fitzgerald’s famous though mistaken aphorism that “there are no second acts in American lives.” Ayers’s spectacular second act began when he enrolled at Columbia University’s Teachers College in 1984. Then 40, he planned to stay just to get a teaching credential. (He had taught in a “Freedom School” during his pre-underground student radical days.) But he experienced an epiphany in a course taught by Maxine Greene, a leading light of the “critical pedagogy” movement. As Ayers wrote later, he took fire from Greene’s lectures on how the “oppressive hegemony” of the capitalist social order “reproduces” itself through the traditional practice of public schooling—critical pedagogy’s fancy way of saying that the evil corporations exercise thought control through the schools.

…Greene told future teachers that they could help change this bleak landscape by developing a “transformative” vision of social justice and democracy in their classrooms. Her vision, though, was a far cry from the democratic optimism of the Founding Fathers, Abraham Lincoln, and Martin Luther King Jr., which most parents would endorse. Instead, critical pedagogy theorists nurse a rancorous view of an America in which it is always two minutes to midnight and a knock on the door by the thought police is imminent. The education professors feel themselves anointed to use the nation’s K–12 classrooms to resist this oppressive system. Thus Maxine Greene urged teachers not to mince words with children about the evils of the existing social order. They should portray “homelessness as a consequence of the private dealings of landlords, an arms buildup as a consequence of corporate decisions, racial exclusion as a consequence of a private property-holder’s choice.” In other words, they should turn the little ones into young socialists and critical theorists.

All music to Bill Ayers’s ears. The ex-Weatherman glimpsed a new radical vocation. He dreamed of bringing the revolution from the streets to the schools. And that’s exactly what he has managed to do….”

As you can see by the dates, this communist indoctrination of children has been going on for decades.

I suppose a parallel might be found in the religious education at Catholic schools. Elementary school children don’t learn Thomism, the philosophy and theology of St. Thomas Aquinas, as such. They certainly don’t have to read his magnum opus Summa Theologica.

But his works remain central to the philosophy and theology of the Catholic Church. In fact Catholic dogma can’t be understood without a foundation in his works. So while Catholic school students don’t need to know about St. Thomas Aquinas per se nor read his actual writing to learn their Catholic catechism, the religious educators who develop their elementary school curriculum are steeped in them.

Didn’t know who she was until recently. I saw her in a similar interview a few days ago with another leftist talking head. I really like her command of the facts and her no B.S. delivery. And, she’s a Marine.

Lots to love about Mrs Sears. Her and her husband are both Marine vets. And it appears that she is for real, which is rare these days. I initially thought the picture with the gun was a bit corny. But it appears I was wrong in this case. So far it seems she is more substance than style.