Meanwhile, protests break out in Europe over vaccine mandates & lockdowns. 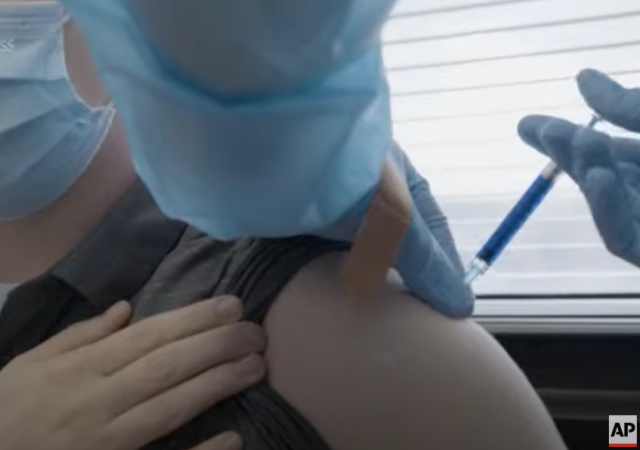 The U.S. opened COVID-19 booster shots to all adults and urged people 50 and older to seek one.

Under the new rules, anyone 18 or older can choose either a Pfizer or Moderna booster six months after their last dose. For anyone who got the single-dose Johnson & Johnson vaccine, the wait already was just two months. And people can mix-and-match boosters from any company.

“We heard loud and clear that people needed something simpler — and this, I think, is simple,” FDA vaccine chief Dr. Peter Marks told The Associated Press.

Here’s hoping the boosters actually work to stem the spread of the virus this winter. Frankly, I have my doubts.

Cases in Maine are at an all time high even with over 91% of adults at least partially vaccinated, and yet again during his usual Sunday round of interviews, not one person in the media asked Fauci how he was so unbelievably wrong about future surges. pic.twitter.com/T7j52f7zXA

And I am not the only one with doubts, either. Protests against vaccine mandates and restrictions broke out all across Europe this weekend.

Demonstrators angry about the new measures gathered in Austria, Croatia, Italy, Northern Ireland, the French territory of Guadeloupe and the Netherlands to protest the moves.

In the Netherlands, a second night of riots broke out Saturday over a partial lockdown, one day after police opened fire on people protesting the rules in Rotterdam.

Protesters hurled fireworks at police and set fire to bicycles in The Hague, as cops used horses, dogs and batons to chase the crowds away, the BBC reported.

Large protest outside the Austrian Embassy in London protesting against the lockdown and vaccine mandate announced in Austria. pic.twitter.com/rt9tN31IWF

In Paris, France protestors protest outside of the Austria embassy against Austria’s new full lockdown and vaccine mandate.

Austria is the first county in Europe to mandate the vaccine for ALL eligible people. pic.twitter.com/x0UchPk3jY

It appears as if the global community is tired of its politicians and public health officials doubling down on failure.

2 months into vaccine passports and with ~90% of adults at least partially vaccinated, cases in The Netherlands are up 942% and they’re going back to lockdowns.

It’s amazing the consistency with which governments will double down on failure to avoid acknowledging reality pic.twitter.com/8XA8cK9vuQ

Meanwhile, back in the US, Disney is putting a pause its proposed vaccine mandate.

Disney has put on pause a coronavirus vaccine mandate for employees of its Florida theme park after the State Legislature and the governor made it illegal for employers to require all workers get the shots, a company spokesperson confirmed Saturday.

…The Republican-controlled Florida Legislature delivered the bill blocking Covid-19 vaccine mandates on Wednesday and Gov. Ron DeSantis signed it into law on Thursday, casting the measures as an effort to protect workers who could lose their jobs for lack of compliance.

Governor DeSantis, also a Republican, has been at the forefront of the political fight to curtail mask and vaccine mandates, saying the push against those restrictions counters overreach from the federal government. “Nobody should lose their job due to heavy-handed Covid mandates, and we had a responsibility to protect the livelihoods of the people of Florida,” the governor said in a statement.

I think Florida’s new law also protects employees of Federal contractors. I’m pretty sure that the Feds do not get to allow violating state law by virtue of signing a procurement contract with them.

Behold my virtue-signaling generosity!
One of you may have mine!