“It is time for me to retire and allow the torch to be passed to someone who shares the values of the district and can continue the work I have labored so hard for the past 18 years.” 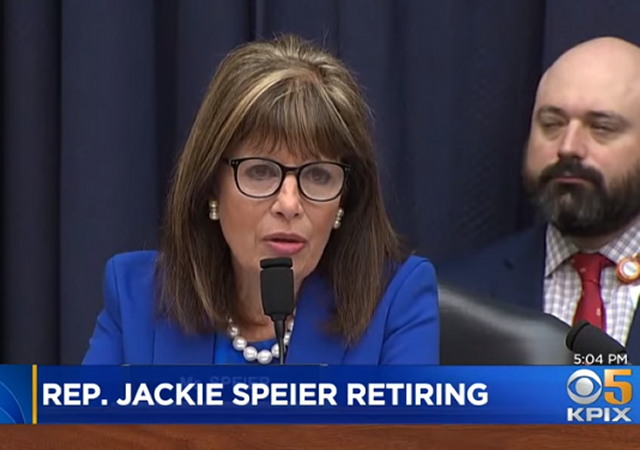 Back in October, we told you about some House Democrats who are heading for the exits. Now there are two more.

Over a dozen House Democrats have indicated that they will not seek reelection. This is terrible news for Democrats, who are already clinging to a House majority by only a thread.

Rep. Jackie Speier of California made her announcement this week.

Rep. Jackie Speier on Tuesday announced she would not seek reelection to Congress next year, becoming the latest House Democrat to opt against running for another term.

“It’s time for me to come home — time for me to be more than a weekend wife, mother and friend,” Speier (D-Calif.) said in a video statement. “It’s been an extraordinary privilege and honor to represent the people of San Mateo County and San Francisco at almost every level of government for nearly four decades.”

An ally of House Speaker Nancy Pelosi, Speier ascended to Congress in 2008, replacing the late Rep. Tom Lantos (D-Calif.), who died in office earlier that year.

Prior to joining the House, Speier was a longtime member of California’s state legislature and a congressional aide. In 1978, when working as a staff assistant for then-Rep. Leo Ryan (D-Calif.), Speier was part of the U.S. investigative delegation that visited the Jonestown cult community in Guyana.

U.S. Rep. G.K. Butterfield announced Thursday that he will not seek reelection, another blow to Democrats seeking to retain a House majority next year and win what is expected to be North Carolina’s closest congressional race.

Butterfield, 74, a former head of the Congressional Black Caucus, has represented several rural counties in northeastern North Carolina since 2004, often winning by comfortable margins. But redistricting by state Republicans places him in a toss-up district with a smaller share of Black voters who were likelier to gravitate to his campaign.

The congressional boundaries could still get struck down in court as Democrats and voting rights groups argue that Republicans created racial gerrymanders and drew lines for pure partisan gain. Butterfield told The Associated Press this month that he would run under a “fair map.”

“While I am hopeful that the courts will ultimately overturn this partisan map and see that a fair map is enacted, I have made the difficult decision that I will not seek reelection to the United State House of Representatives,” Butterfield said in a video. “It is time for me to retire and allow the torch to be passed to someone who shares the values of the district and can continue the work I have labored so hard for the past 18 years.”

Democrats know a red wave is coming, maybe as big as the one we saw in 2010.

They wouldn’t be running for the exits otherwise.

The wheels are coming off, and all the cotter pins are stranded on a container ship offshore of Los Angeles.

After this week’s House circus to pass the economy-killing BBB package, I’m expecting an acceleration of retirement announcements on “both” sides of the aisle.

I wonder how many of them were bought off. It makes no sense for them to fall on their own swords like this for a party in its death throes. Crash and burn.

Now let’s see how Team McConnell-Romney once again save the day for the Dems in the Senate. I’ve never been wrong predicting McConnell’s treacherous finales.

Apparently, Charles Hurt at Breitbart is thinking the same thing:

The Stupid Party has not changed one iota. We are going to once again fall into the same trap we always do. Playing it safe? Every Republican in office ran promising to repeal ObamaCare. Yet once the GOP won a super majority….. rolling tumbleweeds. Now we are heading into a red wave election where the only thing the GOP represents is “we are not Democrats”?

Man do we need Trump back. I love the idea of a “Mean Tweets 2024” campaign platform. Maybe this time people will actually consider what he was tweeting about.

We are not exactly Democrats, but we help out when necessary.

Just the other day idiot RINO Romney’s idiot RINO niece who is ‘in charge’ of the RNC said that she ‘still considered Cheney a Republican’ after her own fucking state voted to throw her out of the party.

The RINO party is unsalvageable without a complete and total housecleaning of every single ‘leader’ in it.

I just received another e-mail request from McConnell for money. No matter how many times I ask to be taken off of these lists, I keep getting them. I am not giving anyone any money at this point and I won’t be in the future unless Trump endorses them.

What do you expect? McConnell is fucking a woman from the CCP.

Liberals die in office rather than retire as a general rule.

It’s not like they could go out and get a REAL JOB!

The Democrats retiring from Congress know a reckoning is coming. They want to avoid the blame. The people will not support a party that governs for fringe groups that are trying to bully everyone else and hate America.

I hope America learns a lesson from this and we NEVER see this kind of horrible political debacle ever again.

I really can’t see what will change. The Republican Party is not an antidote to the socialist/progressive Dems. They haven’t been for over 50 years. What changes now? Same old bag men, water carriers. America has undergone an uninterrupted leftward march since probably Wilson was president. Compromise to idiot Republicans goes something like this: Dems want to spend $4 Trillion. We’ll split the difference @ $2 Trillion. Another victory for the Republic. We need an alternative political party. Republicans aren’t it. And, no, I have no idea how to do this.

I expect, one way or another, America will collapse. We’ll see what pokes its head up through the ashes.

People keep blaming the House Republicans because 13 out of 211 (6%) voted for the 1st bill. Meanwhile, 19 out 0f 50 (38%) GOP Senators voted to pass it too including McConnell himself. And we think this will be different? Every House Republican voted against this one. It’s McConnell’s Senate that is the biggest of our big problems.

That corrupt rat McConnell – and his equally fraudulent fellow rat Graham – have sabotaged us repeatedly. Until they’re both gone, it’ll be corrupt, backstabbing business as usual.

If he doesn’t run for president, I would love to see senator kennedy run the senate. he would have no problem puttingthe radicals in their place and do it in a manner they handle.

I suppose “rats deserting a sinking ship” is a bit of a pun.

I have come to a disturbing decision. If DeSantis runs against Trump, I will vote for DeSantis
All The Jan6 protesters came to DC as a clarion call by Trump, they were is strongest supporters and have been punished for this by rotting in dark isolated cells in the bowels of DC jails.

He should be speaking about this at every opportunity. He should be shaking the Republicans to stand up for these people
He should help fund REAL lawyers

But he does nothing
I wa going to go if I found someone to go with me.
There for the grace of God I did not….

Your premise for Trump re Jan 6 is just plain wrong. He is not in a position to do anything more than decry that hoax like all the others and he has been doing that.

As to making up your mind to vote for DeSantis should he decide to challenge Trump in 2024, he cleared that up this week by revealing that he will be running for re-election. Smart. He is leaving it up to Trump as he promised.

I love DeSantis and I think he is playing it smart. Were he to challenge Trump, he would lose me as fast as Cruz lost me in 2020. He would also lose a great many of us who support Trump. Why would he do that?

DeSantis NEEDS Trump to win! He doesn’t have a shot in hell without money which he doesn’t have and won’t if he challenges Trump. He will be forced to get on his knees like Cruz did and crawl before the dirty money at LA’s California Club for help. They will have demands. So now DeSantis becomes compromised. Having burned his only bridge, he would be the reason neither he nor Trump is president and Florida will have lost a great governor. We will have shot our wad. WE will have snatched defeat from the jaws of victory. Brilliant.

WITH Trump on his side, and this depends on how the 2022 elections go, Trump might have no need to run and so might opt to endorse DeSantis and campaign for him. Having not burned his only bridge because of blind ambition, he would win 2024 in a landslide. If Trump runs and wins, he gets to finish what he started as president and DeSantis gets to finish what he started in Florida and then serves two terms as president. He will only be 49 years old in 2028 and with as solid record of accomplishmen you could ever hope for and with Trump likely having wrecked the Uniparty for him. Two terms to rebuild.

Why would you want to mess that up? You are seriously underestimating how corrupt the US is right now. This is not a board game. Trump is not super human and unlike your claim, he is NOT sitting idly by doing nothing. He is FOCUSING on winning the BIG battles first. We haven’t even had a day of reckoning for any of the previous BIGGER traitorous crimes committed and you want us to get sidelined with Jan 6? No. This is war and you have to pick your battles. We MUST win the war. The day of reckoning for Jan 6 will have to be wait.

Like it or not, modern day politics come down to fundraising and begging for money. Many on these entrenched people haven’t had to do much fundraising in the past if they were in secure seats.
The dem congressional committee doesn’t have the resources to defend as many seats that up for grabs this cycle. The repubs will also have to pick and choose which seats to attack. Up until a month or two ago I wasn’t so sure about the repubs getting the senate back considering they had far more seats to defend especially in states where members are retiring, however right now the dems are imploding to the point where at least four dem senate seats are in play even to a higher degree.
Georgia is certainly in play and Kelly hasn’t shown us much in Arizona. New Hampshire is a toss up state and Nevada may be in play with a strong candidate.

Speier’s district will remain Democrat.
This is no loss for the Democrats.

Let’s be clear: the Phony McCarthy would have no occasion to rant for 8.5 hours had not 13 House R’s and 19 Senate R’s including Minority Leader McConnell signed onto massive socialist destruction bill.

And, the bill was moot had not Minority Leader McConnell thrown Democrats a life line by extending the debt limit date.

I would’ve much preferred to skip the rant, pomp and circumstance by NOT having 32 R’s endorse death to America by massive economic socialist destruction.