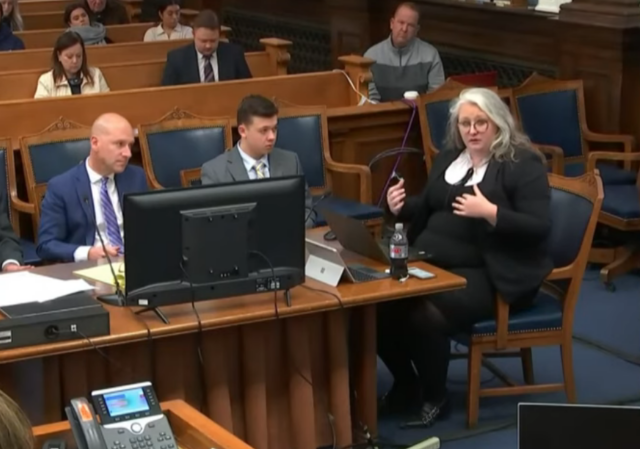 How many of these students actually watched the trial and understand the legal ramifications? This is just more campus left-wing virtue signalling.

In response to the not guilty verdict in the Kyle Rittenhouse trial, students attending Lawrence University, a liberal arts college in Wisconsin, held a protest, calling it a travesty of justice.

Several dozen students converged at the Appleton, Wisconsin campus, which is about 150 miles north of Kenosha. They chanted and held signs comparing the verdict to the cases of Tamir Rice and Trayvon Martin and called for a “retrial.”

“If Kyle Rittenhouse was a black man … he would have been found guilty today,” student Anders Hanhan told WBAY, which covered the Nov. 19 event.

While some students in Wisconsin voiced their anger over the verdict, there are other students who did not take part who said the protest was not surprising.

“Our campus overall leans towards pretty liberal views and many students feel strongly on sharing their opinions surrounding national events such as the trial and verdict,” Stephaune Haylock, a sophomore at Lawrence University, told The College Fix.

According to Haylock, the protest was not a large event on campus.

Lawrence is a very small (1200 students) “university.” A couple of dozen students demonstrate about Rittenhouse verdict. Not significant enough to comment about.

Used to live near there. Spoiled rich kids there.
But they likely had free beer, so that brought a few out.

Some are rich. Others are on scholarships.

Kids, nobody gives a shit what you think about the trial.
Understand that the world doesn’t revolve around your desires.
Grow up, for a change.

Kids, I suspect that if I spoke to each of you individually, I would find that you are all wholly uninformed as to the relevant evidence and applicable law in this case. I hope for your sakes that you all find some wisdom as you grow up. It’s one thing to be young and foolish. But remember, there’s no fool like an old fool.

Events like this just give these maleducated snowflakes an opportunity to fully demonstrate the depths of their ignorance.

This could have been a truly teachable moment, about the Constitution and trials, the importance of impartial juries as finders of fact and determiners of what actually happened, the functions of prosecutors and the defense in establishing guilt beyond a reasonable doubt and the protection Constitutionally-guaranteed rights. But no, that couldn’t be allowed.

Instead, it was allowed to become an activist moment, ignoring things like facts and any “truth” with which they didn’t agree.

My stepdaughter goes to Lawrence. They’ll protest anything. A bunch of activist wannabes in my experience.

Unless you were in the jury, you saw the evidence, and you heard the testimony….do yourselves and the rest of us a favor:

STFU and get back in class.

Has USNaWP come out yet with a guide to the most woke colleges? As a parent of a college age child I can say that knowing the bad about a school these days is as important as knowing the good.

I suspect one could plot the ranking in the woke category and then establish a solid correlation with the school drifting from a higher to lower rank in the their annual college guide. When I attended Oberlin was by and far the best school in Ohio, and conversations with people back home now indicate a few others who are now more highly regarded by locals. Even back then there were signs that kids were enrolling simply based on the activism of the late 60’s as a priority.

Interesting thought. I know that Lawrence was very highly rated back in the 70’s and 80’s, and believe that is still the case. But I do not know much about what is being taught today in its humanities departments. (STEM departments continue to be excellent.)

So they will protest a legal jury trial, but completely ignore a highly disputed election. With evidence.

I am sensing a bit of selective outrage on their part.

Not surprising, considering that the faculty and administration lean far-left. with the usual Diversity, Equity, and Inclusion offices, deans, press releases, etc. I saw something a few years ago about the President taking a public stand against a conservative student organization for the heinous act of publicly challenging leftist orthodoxy.