TIME magazine: The “top U.S. commander in the Middle East says his forces stand ready with a potential military option should talks fail.” 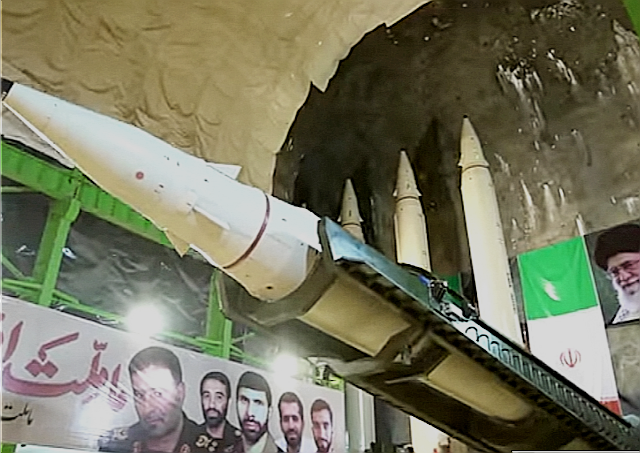 As Iran boosts its stockpile of enriched uranium, the U.S. military believes that the regime will soon be capable of building a nuclear bomb. Tehran is “very close” to acquiring a nuclear arsenal, General Kenneth McKenzie, the head of U.S. Central Command, told Time magazine.

According to the general, the Iranian regime is poised to reach the ‘breakout’ point, a stage where it possesses all the components required for a nuclear weapon. “They’re very close this time,” Gen. McKenzie said. “I think they like the idea of being able to breakout.”

With the Biden administration’s nuclear talks with the Mullahs heading nowhere, the U.S. military is looking at several options to stop them from going nuclear, the general assured.

Less than a week before world powers resume negotiations over Iran’s nuclear program, the top U.S. commander in the Middle East says his forces stand ready with a potential military option should talks fail.

“Our president said they’re not going to have a nuclear weapon,” General Kenneth McKenzie, commander of U.S. Central Command, tells TIME. “The diplomats are in the lead on this, but Central Command always has a variety of plans that we could execute, if directed.” (…)

“They’re very close this time,” McKenzie says. “I think they like the idea of being able to breakout.”

The Institute for Science and International Security, a non-profit think tank that specializes in nuclear weapons analysis, issued a report in September that found Iran could produce enough fissile material to build a nuclear weapon in a month under a “worst-case breakout estimate.” After breakout begins, Iran could produce a second weapon in less than three months, then a third in less than five months.

Gen. McKenzie’s assertion that Iran is getting closer to acquiring a nuclear bomb is in line with the assessment made by the Israeli government.

The Iranian regime itself boasts of ramping up its stockpile of near weapons-grade uranium. “Iran said it has almost doubled its stock of enriched uranium in less than a month, as it prepares to resume talks with world powers on curbing its nuclear program,” the CBS News reported earlier this month.

The IAEA “will soon be unable to guarantee equipment is not being diverted to make atom bombs,” Reuters reported on Wednesday, citing the UN nuclear agency’s chief Rafael Grossi.

Despite alarming signs, the Biden administration hasn’t given up the hope of coaxing the Mullah regime into the framework of the Obama-era nuclear deal. “We continue to believe that diplomacy is the best way to deal with the challenges, the threat posed by Iran’s nuclear program,” Secretary Blinken said late last month.

Not relying on President Joe Biden’s assurances, Israel is preparing for a possible strike on Iranian nuclear weapons sites.

“Israel has approved a budget of some 5 billion shekels ($1.5 billion) to be used to prepare the military for a potential strike against Iran’s nuclear program,” the Times of Israel reported in October. The Israeli media reports say that the Israel Defense Forces (IDF) has ordered several U.S.-made aircraft, reconnaissance drones, and weaponry for a possible covert operation.

And just like that. The legal system go down in flames. Duck and Cover kids.

Oh, Biden* says a “variety” of military options are on the table? Like what? Shipping them pallets of cash in the middle of the night?

Or of enriched uranium from our stockpiles.

Everyone but the Soros regime member will admit that.

If they don’t keep Iran from getting a nuke, then it will be hard to keep Iran from smuggling it into Israel or another country. Iran likes to use proxies to fight its battles, like when their drones shut down half of Saudi Arabia’s oil production and they blamed it on the rebels in Yemen.

So I don’t think Iran would put their new nuke on a missile and shoot it at Israel. I think they would load it onto a truck, and get Hezbollah or a Palestinian to sneak it into Israel or whatever country they don’t like, and blow themselves up in the most populated area they can find. A truck bomb would be harder to defend against, and easier for the Iranians to deny.

Hard to deny a radioactive signature. If Iran uses a nuke – the world will know.

And if they hit either Israel or the US, the world will know and not care.

And if they hit DC, neither would I.

We should be so lucky. They’ll hit some city, though, NY, San Fran, whatever. Not sure I care all that much since by then a Republican, maybe Trump, will be in the WH and will rain down thunder on the foreign perps. And what is really lost in the meantime? NYC? San Fransicko? Shrug. They have a death wish anyway.

Iran was given the green light on the bomb by Obama, Trump tried to roll it back, but Biden (or his Obama 3.0 admin) doubled down. The city that Iran nukes will be on their hands.

After 9/11, the swampies stirred up public fear about “suitcase nukes.” Anybody who opposed the Patriot Act got asked, “How would you feel if somebody slipped through immigration with a suitcase nuke and took out a major American city?” I routinely shrugged off the question by responding, “Can I choose the city?”

We’d sure owe them a lot of thanks.

And basically will be cowards

Better to give Iran a chance to study our nuke signatures, rather than others studying Iran’s signatures.

Container ships off the US coasts. Only takes two EMPs. So what if Iran is the culprit… the energy of what’s left in US will be to shore up what’s left in the States. Frankly, like the JFK administration, having Iran (as with Cuba) having nukes would be a relief… only JFK promised to not let it happen and he considered backing down tantamount to impeachment. The reason that JFK admin wasn’t that concerned was in the mistaken belief that the USSR had full ICBM capability when in reality the USSR had few reliable missiles. Iran nuking a blue city or two might change some minds.. but there is always the collateral damage to anything red.

Will Mark Milley call his boyfriend in China before surrendering to Iran? He may have to check with John Fonda-Kerry to make sure it’s Ok with the KlimateKultureKlan and to make sure that any money or gold is safely secured before anything serious happens.

Miss Milley tried to get through but was told China General busy now. He talking to Russia general. China man forging new relationship with Russia man. Bye bye US sucker.

I think we’re up to III now. But we’re seeing diminishing returns.

“very close” translation = they have achieve the nuclear threshold and now its just a matter of deploying a weapon.

Iran is not stupid. They are masters at hiding their activities. I believe we can expect a nuclear demonstration within 90 days.

Biden will do nothing. He is trying his best to make Jimmy Carter look good.

I all honesty, I think that Carter was a decent person, who was in over his head. I think The Biden’s and those pulling the puppet strings are indecent, corrupt sleaze bags.

Meh. Unless you can convince the woke generals and admirals running the Potemtagon that the Iranians are really White Nationalists nothing will happen.

“Variety of military options on the table”

The military deliberately doing nothing by order of the National Command Authority* is a military option. And the most likely given the current military command structure and the NCA* at all levels..

I expect that we will do nothing. Israel will do what it has to do to try to survive. I think I have a guess of what; having written a scenario about how they would deal with an impending Iranian nuke some years ago. It will be most untidy.

The US under the current regime will take the lead in the world in trying to punish Israel for surviving.

Under this regime, I fear you may be right.
And how horrendous that would be.

“Variety of military options on the table”

This is like a huckster doing a shell game with three shells moving them around on top of the table. Three shells are on the table, but only one pea.

The pea is there only if we’re lucky.

The whole idea of the shell game is that the pea isn’t there by the time you get to choose. Luck doesn’t play a part.

Barky’s dream come true, they couldn’t have done it without him.

Yes. We can thank President OBAMA for the IRAN DEAL that brought us to this moment and to his Vice President who is dutifully following his lead.

Now, while everyone is focused on IRAN, Russia and China can be expected to act against Ukraine and Taiwan.

Biden has checkmated himself.

All Iranian nuke facilities should be target #1.
#2 Most of Iran’s oil exports flow from a single point located on Kharg Island. A military strike would eliminate Iran from global oil markets.
#3 Another point of vulnerability is the port of Bandar Abbas where Iran receives most of its imports. Both Bandar Abbas and Kharg Island are choke points. A coalition of Sunni/EU countries with logistical support by U.S. could shut down both ports. Or they could use a swarm of drones, as Iran did to the Saudis, to severely damage these two choke points or shut them down with a cyber-attack.
#4 The newest point of attack is Bandar Jask which provides oil to other Countries located on the Gulf of Oman avoiding the Strait of Hormuz.
The point is that to date, the Iranians have had a free hand in playing offense in the Middle East — in Syria, Iraq, Lebanon, and the Gulf waters. Time to reverse the strategy and do the same to Iran. If the Iran’s mullahs want to play with fire, they should not complain when they get burned. Time for Iranians to retake control of their country before it is destroyed.
The US or Israel will be attacked with an Iranian explosive via boat or vehicle rather than wait for development of a missile/plane capability in the interest of success. MOAB is needed with missile follow up to assure the weird beards are toast and the Iranians can regain control of their country!

“Our president said they’re not going to have a nuclear weapon,” General Kenneth McKenzie”

Jesus H. Christ — you’re hanging all our futures on the word of a pudding-head who swore to us we would never see helicopters evacuating from the roof of the Afghan embassy, less than a week before we all saw exactly that?

“Barack Obama” (or whoever the hell he really is) has proven to be a disease exponentially worse than Covid.

Why bother with ‘gain of function’ reserach when you can plant “obamas” in a population?

Iran? I thought that Milley said that white supremacy is our nation’s greatest threat