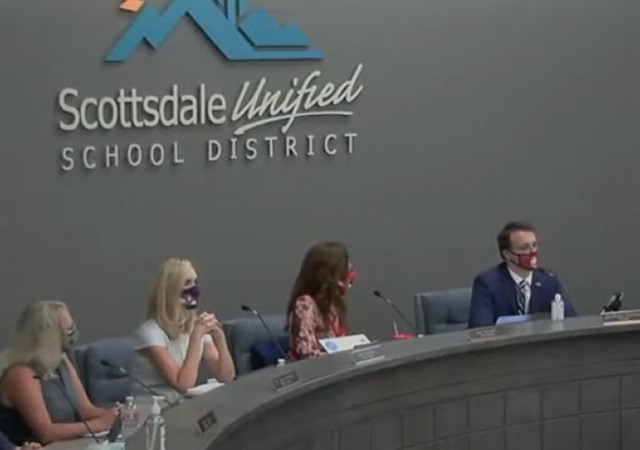 Over the past several months, we’ve seen concerned parents doing battle with school boards in multiple states. In Arizona, the Scottsdale Unified School District board is now accused of putting together a dossier with personal information on parents.

The Scottsdale Unified School District’s administration is scrambling to do damage control after a group of mothers discovered Governing Board President Jann-Michael Greenburg had access to a Google Drive full of personal information, documents, and photos of about 47 people, including children.

An email sent out Wednesday evening by the SUSD’s Communications Office sought to assure families that their personal and educational data is safe. However, the district also solely blamed the discovered digital dossier* site on Mark Greenburg, the father of Jann-Michael Greenburg…

Even though Mark Greenburg is listed as the Google Drive owner, records from an Aug. 17 special SUSD board meeting show Jann-Michael admitted sharing a computer with Mark. With Mark and Jann-Michael sharing a computer and a home, there is no way to know which of them has been uploading files (now known as the “G Files”) to the drive, according to concerned parents.

In addition, some parents say that despite Jann-Michael’s denial of involvement with the dossier, they believe there appears to be evidence that Jann-Michael has complete knowledge of the Google Drive files and had shared some of its contents in an effort to intimidate SUSD parents. Parents are calling that an “unacceptable abuse of power.”

BREAKING: Scottsdale Unified school board president Jann-Michael Greenburg has been caught assembling a dossier with confidential information on parents who oppose critical race theory—including photographs of their children.

More than 600 parents in Scottsdale, Arizona, are demanding the resignation of the school board president after a shocking revelation.

The president, or possibly his father, appears to have kept a dossier on 47 parents who dared to speak out against his policies at school board meetings — a dossier complete with Social Security numbers, background checks, a divorce paper, mortgage documents, trade certifications, and screenshots of Facebook posts.

“I’d call this retaliation,” Amy Carney, a mother of six and candidate for the Scottsdale Unified School District (SUSD) governing board, told Fox News on Thursday. She said “the list of parents targeted in the drive appears to be anyone who has spoken out about anything against our district publicly or online.”

This only reinforces the concern of parents and drives home the idea that more parents need to get involved in their local school boards.

The way this ends is by using their Alinsky rules against them. they wrote the rules.

Oh, yes! Follow the school board members, make yourself visible to them. Let them know their every move is under surveillance.
Prod their paranoia and watch them start infighting.

Even simpler: vote these sinister people OUT.

I really hope someone archived the documents before they were erased. So much easier to file suit against the board president, his father, the entire school board individually and as a group, as well as the school district, and the city.

What’re we thinking, invasion of privacy, conspiracy to deprive someone of their civil rights, deprivation of rights under color of law? Absolutely vote them out, but get creative first and drop the court house on them first.

All in all, getting justice for average citizens is always such a long, drawn-out process, requiring hours upon hours of unreimbursed citizen involvement and activism.

This would be so much easier if there were just some organ of government whose job was to do things like show up at this guy’s door with battering rams and seize all his records and electronic devices, to pore through at leisure for evidence of this crime. But that’s way too much to hope for.

I really hope someone archived the documents before they were erased

Not really a big problem because unbeknownst to most Google Docs users unless specifically changed in the settings Google will back-up all documents uploaded to Google Docs at regular intervals. And Google never deletes anything. Ever.

(At least that’s the way it was back in the day. Haven’t used Google Docs or any other Google services in years. It might have changed but I doubt it. Your mileage might vary.)

This is absolutely horrendous. Unfortunately, leftists are still pushing, despite what happened in Virginia, to put radicals on school boards. In Iowa, two radical leftists were placed on a small school board and likely will have enough influence to pass mandatory CRT since one position is already held by a left leaning democrat. A BLM member was elected to the Des Moines council. They will not stop until they have complete ability to subjugate free people.

Who does Greenburg think he is? The FIB?

From what I have seen, they are wanna be politicians who were not smart enough to make the grade.

Scottsdale school board president is accused of putting together a dossier with personal information on parents.

I’ll bet he’s not the only one. More likely the tip of the you know what.

Who paid the bill for the criminal and commercial background checks? That could certainly provide some insight. If he was using school funds or the schools acciunt for this he could face some legal trouble.

Our system is completely corrupt. When I say “system”, I mean EVERYTHING.

For a little perspective, look back at this documentary by the late Aaron Russo (by all people that ignorant maggot Bette Midler’s former manager):

And yes – he covers ‘voting machines’.

And the federal reserve.

And the LITERAL mafia known as the democrat and republican parties = whch we refer to as the ‘uni party’.

That’s a very fine report. It just about covers it all.

I had this thought when the recent school board flap first occurred, and now this — good grief, this is a local school board, right above whatever group “governs” a trades or services group. Maybe right above Code Enforcement. It’s not even a state-level entity.

Yet they (recent) and he (this one) act as if they were king of the country, the omnipotent, a little Hitler, if you will. Delusions of grandeur much?

Cutting off at the knees, only figuratively, of course, of course, seems an appropriate remedy. Right after taking everything he owns. Rightful society MUST ensure he never rises again.

Over the edge insanity. Oh….and I understand the school president is not even a parent. That in itself is insane….who the hell would vote for such an unqualified person?

Being the Parent of a school age child or even having children at all isn’t and shouldn’t be a qualification for election to the school board any more than holding a certification in education should be.

Absolutely. Just like there’s no reason whatsoever that a white male shouldn’t be head of the Bureau of Indian Affairs. Let’s all wait for that to happen.

On the other hand, with due allowance made for wiggle room, Liz Warren woud be a good fit.

On the other hand, if the moccasin doesn’t fit, don’t wear it.

Until these rabid leftists start to face severe consequences for their actions, nothing is going to change.

Follow the money. Some of the dossiers include material from a private investigator. Find out who paid him.

I had this thought when the recent school board flap first occurred, and now this — good grief, this is a local school board, right above whatever group “governs” a trades or services group. Maybe right above Code Enforcement. It’s not even a state-level entity.

Yet they (recent) and he (this one) act as if they were king of the country, the omnipotent, a little Hitler, if you will. Delusions of grandeur much?

Cutting off at the knees, only figuratively, of course, of course, seems an appropriate remedy. Right after taking everything he owns. Rightful society MUST ensure he never rises again.

I can see no reason why a school board would require, much less have access, to this information, if not for nefarious reasons.

Between this and Virginia, I am convinced the NSBA is yet another leftist organization, likely with some Soros backing (speculation on my part).

That said, between this and the voting fraud scandal, there is a real Marxist cancer growing in AZ, and likely VA.

Maybe we should all go to school board meetings from now on.

This is a much bigger indictment of Merrick Garland than the school board.

Bad behavior by school boards dwarfs bad behavior by parents and it exposes that Merrick Garland is among the worst political hacks ever born.

Thanks for rescuing us form him being on the supreme court Mitch McConnell.