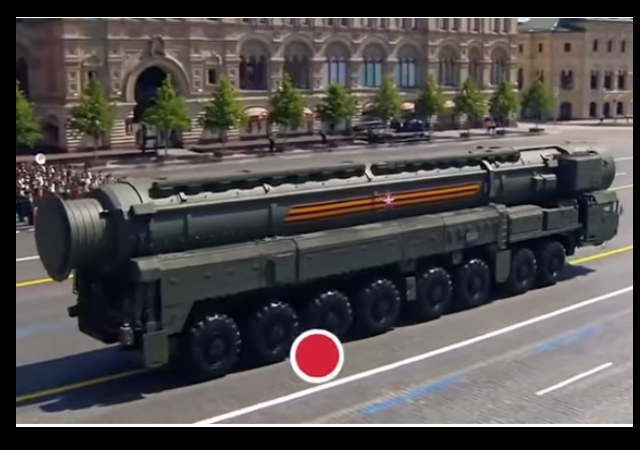 While America’s military leadership has focused on diversity, inclusion, and equity, Russia took advantage of a special opportunity to include some diversity in its weapons options.

Its military officials have announced a ‘successful’ test of the 6,670mph hypersonic Zircon missile.

Defense officials said in a statement the missile was fired from the Northern Fleet frigate Admiral Gorshkov while sailing in the White Sea.

The missile’s flight “corresponded to the specified parameters” and successfully hit a marine target located nearly 250 miles away, they said.

The same ship and crew also successfully performed a Zircon test firing at a naval target two weeks ago, according to the Northern Fleet.

The Kremlin announced last month the missile was successfully test-fired from an underwater position for the first time.

Russia has also announced it has started serial production of these units.

The ‘unstoppable’ weapon is being rushed into manufacture even before the end of state trials, reported TASS.

The go-ahead for full-scale production at a top-secret plant at Reutovo, near Moscow, follows recent ‘successful’ tests of the Mach-9 capable missile which Russia boasts will evade all Western defences.

‘Serial production of Tsirkon missiles is underway at NPO Mashinostroyenia (plant), although state trials of this product’s surface launches will continue,’ said an informed source.

Vladimir Putin has ordered the missile to be deployed next year by the Russian Navy boasting that it is ‘truly unparalleled…in the world’.

As an additional bonus, Belarus dictator Alexander Lukashenko agreed to join forces with Russia in the event of a new war in Europe.

The West realises that if it triggers a conflict on the Russian border, Minsk will not stand aside, he said.

‘They understand perfectly well that if they once again start a war in the Donbass (eastern Ukraine) or somewhere else on the border with Russia, Belarus will not stand aside. And it’s clear whose side Belarus will take.

‘They understand it, which is why they have begun to strengthen their northern border, the Ukrainian-Belarusian border, although there is no reason to do it at the moment.

How is the Biden administration responded to this development? While there is no response yet, the missile launch, administration officials are pushing back on sanctions against Russia suggests Putin does not need to worry.

The Biden administration, led by Secretary of State Antony Blinken, is pushing back on Congress passing tougher sanctions against a Russian energy project even as President Biden is coming under pressure to get tougher on Moscow.

The administration on Monday imposed new sanctions on a ship involved the construction of the Nord Stream 2 gas pipeline, a top strategic priority of Russian President Vladimir Putin.

But Biden’s team is leery of tougher action on the project for fear of antagonizing Germany, an important European ally in the fight to address climate change and limit China’s growing global influence.

Nord Stream 2 is an important part of Putin’s effort to exert economic and military pressure on Ukraine because it would allow Russia to send gas to Europe without going through the country.

Meanwhile, between breaks from Critical Race Theory training, the US military may find time to launch its version…in two years.

The U.S. is still a “year or two” away from fielding its own hypersonic weapon, said Gillian Bussey, director of the Department of Defense’s Joint Hypersonics Transition office, earlier this month. The Army’s Long Range Hypersonic Weapon will be the first U.S. hypersonic system “that was actually be deployed and … ready for use,” while the Navy’s Conventional Prompt Strike System is not far behind, according to Bussey.

There is a small ray of sunshine in this gloomy bit of news. It appears there may be less reason to worry than the news may suggest.

Hypersonic missiles pose the same threat as regular missiles if the underlying defense system can’t stop either, thus there seems to be little need for severe concern in this growing hypersonic arms race.

Races typically can only be measured when all competitors are shooting for one goal, such as the space race of the Cold War which aimed to land a man on the moon.

The hypersonic arms race is, in reality, a bunch of superpowers chasing after their own version of what they believe will be the most strategically important weapons system. The US, for example, while still a few years off from hypersonic capabilities, has largely focused on hypersonic non-nuclear missiles, which infers that the missiles would need to be far more accurate than nuclear counterparts. This may explain why the US’s technology is taking longer to develop.

Hopefully, the American public will elect new executive leadership that genuinely has the national security of this country as a priority rather than social justice inanity before these developments become something to worry about honestly.

Milley plans to escalate.
New rainbow flagships, all around!
First off the slipway: the USS Submissive!

With this being what our military is capable of why not go back to a peace time military budget and return our system to one that relies on the genius of Americans?

Most militaries at least encourage patriotism love of country and love of our national traditions; our military encourages hating our country, we are we mortgaging the future of our nation to keep its budget at ridiculous proportions?

The genius of America likely still remains. But, what American company do you suggest build the results of that genius? Western electric is gone. RCA is gone. Zenith radio is gone. Boeing seems to assemble airplanes made from kits assembled from other peoples doings. Not their own designs. Even my latest package of Johnson & Johnson bandages came from China. If we don’t have an industrial base, we can’t fight a war. Oh, and moving the war material may prove difficult. Do those trucks hauling admit California Road standards?

Elon Musk if he had just learned to hate himself that he is a horrible subhuman white guy instead of the three Rs would he have amounted to much?
.
A great place to start investing in America would be through commissions to shut down schools that fail to make their students literate, and working on creating an alternative way to become a teacher to remove it from the list of leftist monopolies (most states will make you go through the same CRT based teacher training programs) while investing in also shutting down schools that fail to make their kids gain functional literacy.

American academic performance by every metric is in very steep decline and has been for some time.

You do not seriously expect us to perform well in major competitive fields when what we learn in school is CRT do you?

I also wouldn’t worry about war with China or Russia neither dictator wants to end up like Nicholas II, even if they could beat us in a war they don’t want to try. War is very dangerous for any government.

The ‘genuis of America’ is the minority of the population now.

Leftist poison and 24 years of Clinton/Bush/Obama did far more damage to our nation than any Russian missles ever could.

The great thing about that is what the public gives the public could take back https://www.youtube.com/watch?v=pvwSsv1IAmE

Biden will surrender to Russia or China with much more class than Trump would.

The better answer is we aren’t going to war with Russia or China, such a war would have doubtful results even if such a war doesn’t become nuclear.

Looks like we’re heading for a confrontation between Russia and Islam for Western Europe. Should be interesting, in an Armageddon sort of way.

The Islamists will win. Their weapons? Their wombs and liberal idiots.

Make that “our wombs.”

Have you ever spoken to any Russian? Most of them don’t give a dam what your religion is and by the way have you ever heard of Tatars?

There is no confrontation between Russia and Islam nor should there be.

It’s not a religious battle. It’s a battle for territorial hegemony. For that, they’d battle Venezuelans.

I fully expect about six of these to level DC within 6 months, followed by a nuclear winter that kills 80% of the world’s population.

But the rainbows will stop them. As long as we all worship the god of DEI, right?

Dems are not big fans of reality.

All that will survive are cockroaches and the obamas.

Survivors would probably have to live in a bunker for about a year.

But at least we don’t have an Orange Man making mean tweets on twitter, right? Right?!??