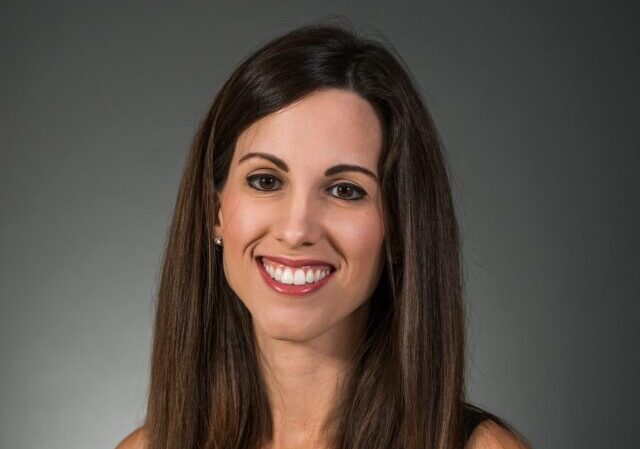 Rhode Island affiliates of the largest teachers union in the nation, the National Education Association, have repeatedly targeted me for seeking information about Critical Race and Gender teaching in the South Kingstown, RI, school district, where I live. The entities involved are NEA-RI and NEA-SK,

It all started when I enrolled my daughter in kindergarten for this fall and the principal of her elementary school told me the school does not refer to children as “boys” and “girls” and that they teach a “certain line of thinking about history.” My school told me to file public record requests to gets answers to my questions about Critical Race Theory and gender theory in the school district. I was the focus of a union meeting singling me out: 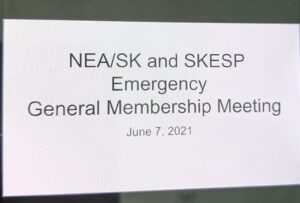 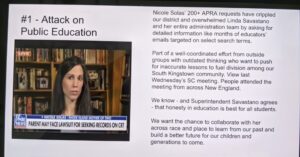 The school committee threatened to sue me, but that backfired on them when I posted about it on Legal Insurrection, I’m A Mom Seeking Records Of Critical Race and Gender Curriculum, Now The School Committee May Sue To Stop Me.

That led to national publicity. The school committee backed off and didn’t file suit.

The unions didn’t back off. This summer, they sued me and sought an emergency injunction. They dropped the injunction because they had no case, but I have filed anti-SLAPP claims against them seeking punitive damages.

The first step in that process is a hearing Wednesday, December 1 at 11:30 a.m. EST with Judge Linda Rekas Sloan and the link for the public to watch is here:

To access the hearing, simply scroll down to “Associate Justice Linda Rekas Sloan” and click “Remote Hearing” at 11:30 am EST.

But the union still is not satisfied. Now, the head of NEA-RI  is organizing on social media to get me kicked off Twitter. First the teachers union sued me. Now they are organizing to deplatform me.

“Report her and then block her!”

It appears from the image that Walsh reported me to Twitter. 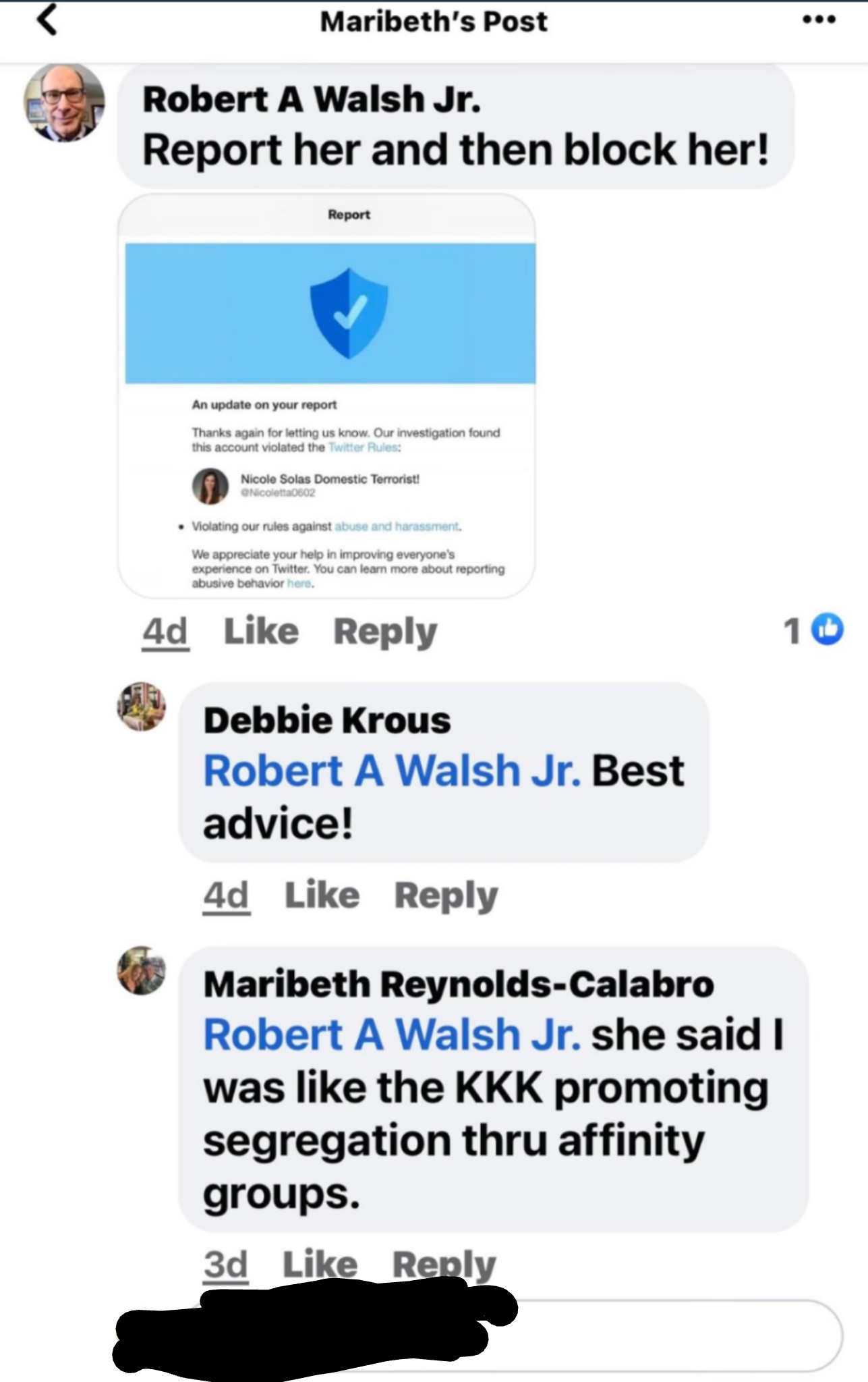 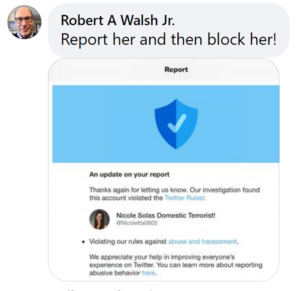 This appears to relate to this tweet of mine objecting to the Providence teachers union president supporting and defending segregated teacher sessions.

The KKK and Providence Teachers Union both say it's good for white people to form their own groups.

Its intimidation tactics to further harass me on social media by organizing union members to deplatform me. I’m a stay-at-home mom who cares about what children learn in public school. I use my Twitter account to communicate with other parents about public education issues, including raising awareness about Critical Race Theory in school and the bullying tactics teachers unions use against parents. Rather than engage on the merits, the unions try to attack and silence.

Dirtbags….every single one of them. Perpetually pissed and true control freaks.

The funny thing is all 50 states have sunshine laws. For the lower intellect that has to do with government docs not the orb in the sky. ( seriously I had to explain that once)

It’s Twitter, you shouldn’t be on it at all anyway.

At least have accounts on other friendly social media, post comments to both Twitter and those other accounts, and if they censor your posts, then post that information to the other accounts. Also, consider creating your own website, and frequently mention it on Twitter, have that site refer people to the alternative forums you are posting on, including LI. The point is to draw people away from Twitter. The truth is that people are deserting Dems in droves, and they need to be aware of alternatives.

many years ago I dumped AOL and Prodigy because of their constant attempts to keep me in their walled off sandbox. Twitter and Facebook are just as bad. I keep an account on each but very rarely use them.

They will be successful no doubt.

Yes, progress (i.e. unqualified monotonic change or one step forward, two steps backward) is a fait accompli in the Twitterverse of #NoJudgment #NoLabels.

That is probably inevitable, and then people should create aliases.

Demos-cracy is aborted in darkness.

Thanks for getting the word order correct:Diversity, Inclusion, and Equity. I wish more publications would make reference that way.

Nicole – You are courageous and an example to people who believe in parental rights. You have a righteous cause. I pray you stay strong and prevail.

Every teacher (and every government employee) should immediately go to Freedomfoundation.com and choose OPTOUT to cease paying union dues. The ability to do this is authorized by the SCOTUS Janus vs AFSCME opinion, no matter where in the US you reside. They have already helped 100,000 union members leave their crooked unions.

Go to Gab.com. Appreciate all your efforts; they are sorely needed!

There are other new platforms to use for your communications. Twitter is a run by Soviet style apparatchiks. It is a cesspool.

You are like the person who walks into a greasy-spoon diner’s pantry in the middle of the night, flips on the light switch, and watches the cockroaches scatter in panic.

It’s probably because they think anyone who has gone through the American educational system is too dumb to understand what they’re doing.

And they should know, right! It’s their plan.

Nicole,
I watched the video of you in an earlier LI article and was impressed by how you took the fight to these rascals! Thank you for your service to our country! We need people like you to stop the degradation and destabilisation of our country. I will pray for you.

Sociopaths will control you or they will destroy you. A target has three options: escape (not always an available option), surrender, or fight like a cornered badger (Nicole Solis). She is a true patriot. The POS union (and their handlers) is very afraid of her and their loss of power.

Personally, I believe that public schools are not salvageable. I feel sorry for decent teachers, they will probably suffer pay reductions, and many will have to relocate. The public school system will probably implode, and with that the union will die a slow painful death.

Well, yes. But that’s been their plan all along, so they will actually ~win~ in that scenario. Just like Baghdad Bob.

Twitter is for twits. Find another Social media platform one that truly supports freedom of speach. if everybody stoped using twitter the world would be a better place

How was this not brought into consideration of the hearing WJ reported on today with regard to the union’s intent? Clearly there is a pattern of harassment and intimidation.

Inigo: Give us the gate key.
Yellin (dismissively): There is no gate key.
Inigo (with disturbing calmness): Fezzik, tear his arms off.
Yellin (quickly holding up the key): Oh, you mean ~this~ gate key.