Whistleblower (allegedly) alleges Texas Department of Family and Protective Services employees are being forced to take the course as a condition of employment. 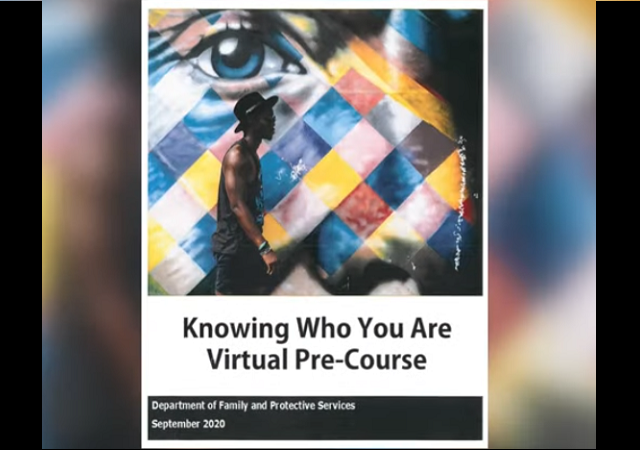 In a video posted to his campaign website, Huffines alleges that a whistleblower—who wishes to remain anonymous—has come forward with proof that Texas Department of Family and Protective Services (DFPS) employees are being forced to take a course steeped in Marxist Critical Race Theory (CRT).  These courses are reportedly a condition of employment.

A whistleblower from the Texas Department of Family and Protective Services (DFPS) has stepped forward, revealing critical race theory-based teachings required for all department employees as a condition of their employment.

The whistleblower, who remained anonymous due to fears of retaliatory punishment, spoke with Texas gubernatorial candidate Don Huffines about the training, providing the documents used for said training session.

“A whistle blower inside the Texas government came to us to help in critical race theory indoctrination, that has been forced on state employees and is being paid for by you, the Texas taxpayer,” said Huffines.

The whistleblower said that employees were required to complete the “Knowing Who You Are” training, and then report back to their supervisor to state that they completed it. They said it was required as a condition of employment.

The training, though not explicitly stating that it’s critical race theory, encompasses many of the race-based tenants [sic] it’s based on. The course teaches that race and ethnicity are essential to every aspect of life.

None of the CRT pushed in our schools or workplaces explicitly references CRT or is called “Critical Race Theory: Indoctrination 101,” but that is exactly what it is.

The materials allegedly provided to Huffines can be viewed here.

Last week, a whistleblower within the Texas Department of Family and Protective Services shared employee training materials with the Huffines Campaign that clearly contain Critical Race Theory. After reviewing the materials, conservative candidate for governor Don Huffines called on Greg Abbott to stop using taxpayer dollars to promote Critical Race Theory and instead root the Marxist ideology out of Texas.

“Critical Race Theory is a disgusting, Marxist ideology dedicated to pitting Texans against each other and dividing our state. It has no place in Texas’ period, let alone in our state agencies. Greg Abbott must immediately call a special session of the Texas Legislature to weed out this poison from not only the Department of Family and Protective Services, but every agency and university in our state.”

According to Huffines and the materials allegedly obtained via this unnamed whistleblower, the required indoctrination concludes with a series of questions that are blatantly out of line, including one that asks how committed the government employee is to becoming “an activist for social justice and change.”

It establishes that a person should have a healthy “race and ethnic identity,” and that a person engaging in this identifies as a member of a particular race or ethnic group or groups, understands that each group has its own positive and negative aspects, and “affiliates” with members of his to her own group.

Those that have an “Unhealthy REI” do not have a significant level of importance placed on racial or ethnic differences and doesn’t identify in a particular racial or ethnic group, the critical race theory training teaches its participants.

The training also establishes “building blocks” for teaching a healthy REI in children by promoting racial and ethnic pride, developing multicultural competence, and preparing them for facing “racism and discrimination” in their lifetime.

The course features an assessment to be completed, in which the taker has to state their level of agreeing with phrases such as “I am willing to make personal sacrifices in order to help others get through the difficult parts of their racial and ethnic identity journeys,” “I seek fairness and justice for all persons, and I will work to eliminate racial oppression,” and “I am willing to question racial inequities perpetuated by institutions and systems and serve as an activist for social justice and change.”

This “Knowing Who You Are” indoctrination course is described as follows on the West Texas Tribune website (archive link):

“Knowing Who You Are” is one of a series of learning opportunities created and developed by Casey Family Programs, and offered to DFPS staff, city and county leadership, and the community. The core program consists of a two-day experiential workshop led by certified co-facilitators of different racial and ethnic identities. The curriculum covers such topics as building blocks to a healthy racial and ethnic identify, communication about racial stereotypes, courageous conversations, and developing action steps for overcoming barriers. The workshop is preceded with a video and an online course to establish foundational concepts. All disproportionality specialists are certified at the facilitator level, most at the certifier level, and two at the Coach level. The DFPS, with the support of Casey Family Programs, as selected KWYA as the primary cultural competence curriculum to be modified for implementation across all programs. Community partners frequently attend KWYA.

Huffines issued the following statement to the Daily Wire:

“Given that DFPS is a state agency under the direct purview of the governor, Abbott should have been aware that CRT training was being forced on state employees,” asserted Huffines. “And if he wasn’t aware, that in and of itself is a serious problem. What other radical left-wing initiatives are our tax dollars funding, without the governor having the will or desire to stop them?”

Earlier this year, Abbott signed a bill into law that bans the teaching of CRT (and the much-lambasted New York Times‘ 1619 Project) in Texas schools.

Your adserver is doing this site harm. Just running the cursor past the ads and got knocked off 3 times by MacAfee webadvisor.
Risky sites:
https://w423arli543ke-sh654ip.xyz/mcaf04/index.php
https://lg-glo.adessentrak02.com/t/clk
https://win.omgsweeps.info/api/offer

Legal Insurrection is the only website I visit regularly where this happen- on a regular basis.

We are looking into it, thanks. We had a problem with someone feeding McAffee ads a few months back, and I thought we solved the problem. But it looks like it’s back.

Little healthy R vs. R competition? Abbott deserves it. Texas benefits by it.

THIS ENDS WITHIN 24 HOURS

I’d be surprised if this report is accurate b/c Texas is not a state that entertains this nonsense (except maybe in Austin). However if true, I’m sure it will end.

Abbott will not allow this. If he cares for Texas, America or has aspirations for further office or higher office, he will end it.

Yeah, I’d sure as heck investigate before concluding it was impossible.

“…If he cares for Texas,” Abbott cares for Abbott. His recent good actions that are visible are driven by his fear of his three Primary opponents. This under-the-radar CRT is credible in my opinion. I do not trust Abbott.

It is great to see Texas is stamping this out. They should also make sure that all the people promoting it are unemployed.

DSHS/DFPS throughout the country are their own little fiefdom.

Is there any Republican who takes control of alphabet (state or federal) agencies seriously?

This is something I have very consistently criticized Trump for and Abbott deserves it to, this is very overt negligence. If you want to be a Republican chief executive (state or federal) these agencies are your responsibility.

That said Abbott is (like Trump) very firmly against CRT so we know this will be gone in a day but Abbott isn’t unique, Trump did the same thing this seems to be a party wide Republican problem.

Is there any Republican Congress that has proposed repealing the civil service system that prevents them from doing it?

This seems pretty tame compared to other training/indoctrination/struggle session materials. Until one gets to the ‘serve as an activist for social justice and change’ part which is a huge tell. The capture by prog of our institutions is pervasive and at the moment unchecked.

Perhaps the only way to stop this sort of material is to require specific executive review and approval from the Gov before an agency is allowed to commit funding and training time for any training materials. If that results in delays and inconvenience so be it. Until these bureaucrats earn back the trust they forfeited they can be treated like adolescents asking their parents permission to leave the house.

You don’t actually have to take the course because you can guess what answers they want on the quiz at the end.

You don’t even have to guess.

IIRC the Texas National Guard was subjected to this nonsense a few months ago. Don’t know if Abbot intervened.

Based on these comments most of us seem to know almost nothing about what HHS and especially CPS does*Abbott has pretended to care about the children of Texas his entire political career!!LIE!!This is just a bump in the road*Look at the lawsuits and what is alleged*Texas has lost these*How much money spent on appeals not fixing the problem.*Look at the appointees of the boards*Most of them are from the same broken system*If there are again too many white foster placements; why is that?It is stated in court documents that under oath caseworkers “Didn’t know it was against the law to lie”**Follow the money always always.