One pro-conviction protester poured Gatorade on a Rittenhouse supporter. 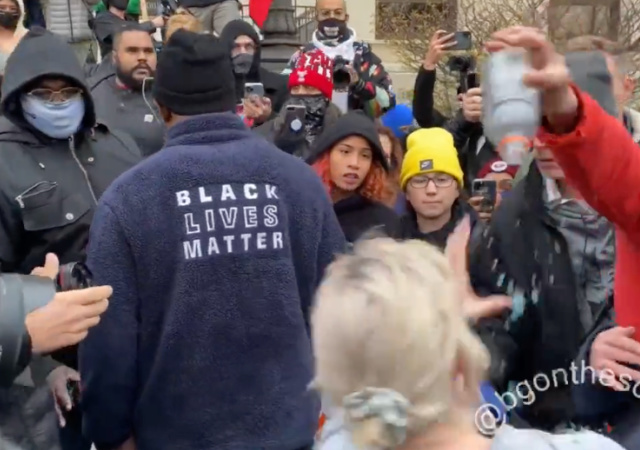 Andrew Branca has done a splendid job covering Kyle Rittenhouse’s trial. The jury is deliberating, but the action is taking place outside the courthouse.

It’s the same old story: Supporters of the accused gather quietly while the left loses its mind and attacks them.

The two sides came together to talk and enjoyed a pizza. It didn’t last very long. The pro-conviction people attacked and the police arrested them.

Kyle #Rittenhouse supporters and BLM Protesters are now sharing a pizza together, speaking about unity outside of #Kenosha court house pic.twitter.com/yUajf1KPL2

MULTIPLE ARRESTS IN KENOSHA: BLM Protesters clashed with Pro-Rittenhouse protester on the steps, one journalist got punched and two blm protesters were arrested across the street. #HappeningNow #RittenhouseTrial #Rittenhouse pic.twitter.com/CWjTZvxN8z

Angered by the presence of a Kyle #Rittenhouse supporter outside the #Kenosha courthouse, a protester dumps his drink over the woman’s head and tries running away. pic.twitter.com/RCvArLRy43

Angry leftist protesters surround & scream at a woman holding a sign that reads, “BLM & Antifa are here to intimidate” outside the #Kenosha courthouse. Video by @RebsBrannon. #Rittenhouse pic.twitter.com/5qz8Gy5AQD

Chants of “If we don’t get it, shut it down” led by Jacob Blake’s uncle outside the courthouse, minutes after the jury concludes today’s deliberations without yet reaching a verdict in the Kyle Rittenhouse trial #Kenosha #RittenhouseTrial pic.twitter.com/0EkxMwhK1F

Two arrests made this afternoon, captured by @ScooterCasterNY after an altercation broke out on the steps of the Kenosha County Courthouse #RittenhouseTrial #Kenosha pic.twitter.com/WowVYYYcJM

Some verbal arguments between opposing demonstrators, Kenosha Police come in to move the crowd out of the street. The afternoon continues as attorneys inside the courtroom discuss the drone video used at trial #Kenosha pic.twitter.com/9MQLieBRt5

Scenes from around the Kenosha County Courthouse today. Jury deliberation has been ongoing for the past few hours #Kenosha pic.twitter.com/JNjcNUEsbG

Nick Sandmann and Kyle Rittenhouse have turned out to be the right young men in the right places at the right times. (Hey, yes, Kyle, too. When government safety personnel don’t step up to protect the rest of us, it must be civilians who step up to do the job.) Young Nick and Kyle each epitomizes a version of the men of America’s Greatest Generation. May God be with them.

The names Trump, Sandman and Rittenhouse just might become part of history of the Second American Revolution.

When you think you might be writing utter garbage as you just did there step away from the keyboard and return in half an hour.

You also did Trump no favors with a statement about how he will lead a revolution. Think before you speak even if it is just for 30 seconds.

Trump got these retards and lunatics to take off their own masks and show who they really are.

Check your ratio before telling other people who the timeout box candidates should be.

did you read the same article I just did? WHERE in that post does he say anything about Trump “LEADING” a arevolution?

Your kind,read one thing then say something entirely different but using some of the same words, is part of the problem.

“Vaccines are safe and effective” is getting people killed by them. Yet that lie contnues. from the highest placed voices in the land.

So in Washington state a judge granted a restraining order to keep anti mask protestors away from a school in vancouver, citing safety “concerns.”

Notice how they are NOT doing that here???? Despite actual threats, actual violence and very real probability of massive violence once the verdict is reached.

Know this, the violence that will occur has been sanctioned by the city of Kenosha. They have the power to run these bastards off, they are choosing not to.

I agree the violence is supported by Kenosha (otherwise it wouldn’t be happening) BUT the point about Washington isn’t a good one, in Wisconsin a Washington state judge might as well be a Danish judge.

They could easily set a 500 meter restraint. Especially since there have been threats to the judge and intimidation of the jury.

The defense should be demanding this.

did you read the same article I just did? WHERE in that post does he say anything about Trump “LEADING” a arevolution?

Your kind,read one thing then say something entirely different but using some of the same words, is part of the problem.

“Vaccines are safe and effective” is getting people killed by them. Yet that lie contnues. from the highest placed voices in the land.

as long as they are not judging Phautchee’s sand fly beagles…….

The knee-jerk in me says … this has become fatiguing … we’re not going anywhere … maybe we should just have this civil war and be done with it.

Ditto…..
Our founders would be out of ammo and rope by now.🤬🇺🇸

Punishments, or it didn’t happen.

Religious zeal is a terrible thing when the religion is as false a god as wokism.

The Police found piles of bricks in the alleys around the city. If you own a business in Kenosha then hire people like Kyle to protect it or lose it.

Someone should go with a nice trailer and round all them bricks up before noon.
The people who would throw them don’t often show in the sunlight and are rarely morning people.
Maybe there’s a woke box store in Kenosha where they could return them for store credit…. 🙂

Donate them to Habitat for Humanity and let them do something (literally) constructive with them.

Leftists have such a thin veneer of civilization. Comes right off
It seems that these days the narrative has real violence attached.

“The pro-conviction people attacked and the police arrested them.”

Has anyone else noticed that whenever members of BLM or Antifa are arrested or come under public scrutiny for some other reason that they almost always either have a criminal record or they are trans?

CIA has been grooming an army of mentally handicapped and drug-addicted soldiers since the 60s.
We’re seeing them now.

That’s a lot like writing, “Defund the Mafia.” The CIA doesn’t really need your funds anymore.

Robert Barnes mentioned just last night that Antifa and BLM actively recruit the same types as did the KKK. They don’t want ideologues, they want psychopaths. Then they give meaning to their psychoses by telling them their violence is appreciated, meaningful, and for the good of society, encouraging their psychotic behavior (when everyone else in their lives has tried to suppress it, they think they’ve found a group to which they can “belong”). It’s easier to employ psychopaths for violence than it is to recruit normal people and convince them to act like psychotics. They’re not interested in having brain-power in the street, just people capable of extreme violence.

Yip….troglodytes of society.😏
It’s time to thin the herd in this nation.

I still struggle to see what end goal BLM has in this fight. Kyle is white. All three of the individuals who attacked him and were injured (two of them fatally) were white. This is not a race issue at all. This is a trial about self defense. That the events happened during racially charged riots is irrelevant.

Has me wondering if there is a real intelligence gap in these BLM protestors. Or, are they against self defense so that no one can stand up to them in the future (I know Antifa feel that way). After all, if the government won’t act to stop the protests, the next best (and perhaps only alternative) is for courageous law-abiding citizens to take up arms in place of the government who should be acting.

If more citizens were armed in the places where Antifa and BLM flourish, perhaps the protests really would be peaceful (as opposed to “mostly peaceful” yet still involving arson and other property destruction). Peaceful protest is a cherished right and privilege in our nation. Destruction is not and should not be.

They are trying to tear down that wall by any possible means.

What the city fathers fail to realize is that when the “courageous law-abiding citizens take up arms in place of the government who should be acting,” their first targets (outside of the mob itself) are not going to be Autozones, Apple stores, and federal armories… they are going to be the offices and homes of the faithless, treacherous wastes of meat who should have acted.

Nobody is lynching elected officials or police officials, nobody is going into civil war and nobody is firing on anyone else.

This is a case of injustice because Rittenhouse is on trial at all, but no you aren’t going to see an uprising. What you could do is write to the Wisconsin Gubernatorial candidate about the injustice which unlike threatening lynch mobs could actually do something.

It’s the only drum beat that matters right now. And apparently, there’s no shortage of idiots willing to do Soros’ dirty deeds.
#toostupidtolive

Low iq, low impulse control, high aggression, and high time preference. What else can be expected from these kind of people.

Don’t the Pro-Conviction Protesters realize that their very presence is cause for appealing the verdict, if they get their way?

Don’t the Pro-Conviction Protesters realize that jury intimidation is a crime?

Why should they? No other form of intimidation is against the rules anymore.

They don’t care that intimidation crime, they feel entitled to break all laws.