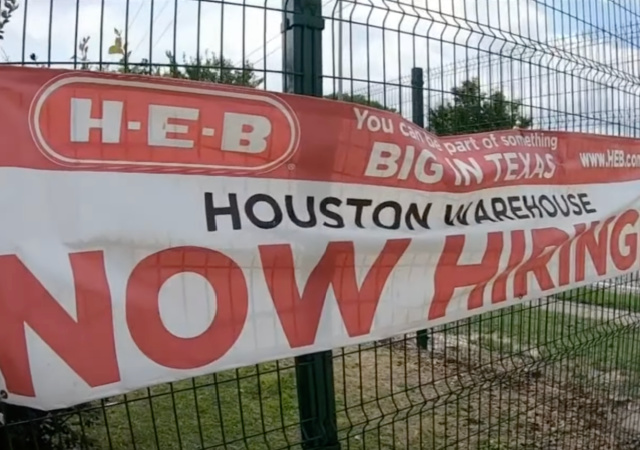 The economy has started to reopen with 11.2 million job openings as of November 5. The latest job report saw little change in the labor participation rate.

Well, the Labor Department revealed on Friday that people quitting their jobs hit an all-time high in September:

The so-called quits rate—a measurement of workers leaving jobs as a share of overall employment—was 3% in September, a record high, Friday’s Labor Department data showed, a sign of worker confidence in the job market. Total quits, which reflects the number of jobs that workers left voluntarily, hit another record at 4.4 million.

Total job openings have been well above their pre-pandemic peak—about 7.5 million in November 2018—since February, when Covid-19 vaccinations initially ramped up and the U.S. economy started to more broadly reopen. Many of the open jobs are in warehousing, shipping and consumer-facing retail, a trend that is likely to be supercharged by the holiday shopping season and strong consumer demand.

Nick Bunker, an economist at Indeed, said that a lot of the quitting “has been job switching.”

It’s also not widespread while seasonal jobs with end dates have sprouted:

A separate state-level report showed the rate at which workers were quitting in August—the latest data available—wasn’t widespread across the U.S. The so-called quits rate that month increased in 14 states, with the largest increases occurring in Kentucky, Idaho and South Dakota. Growth in job openings has been more uniform, according to Indeed. With the exception of Honolulu, postings are at least 25% above the pre-pandemic baseline in all large metros, it said.

New openings, especially seasonal ones with set end dates, are growing rapidly. The National Retail Federation, an industry group, anticipates that retailers will hire 500,000 to 665,000 seasonal workers compared with the 486,000 they hired in 2020. Target Corp. aims to hire 100,000 seasonal workers and around 30,000 warehouse employees, while Walmart Inc. wants to hire 150,000. Many of those positions are offered as permanent.

So who is quitting? The low-wage and front-line workers:

Among front-line and low-wage workers in Mercer’s survey, 37% of food, retail and hospitality staffers are thinking of quitting, up from a historic norm of 27% among eight million employee responses collected by the company over the past five years.

Nearly half of low-wage and front-line workers surveyed said their pay and benefits were insufficient while 41% said they felt burned out from demanding workloads. Some 35% of Black employees and 40% of Asian employees said they were considering leaving, compared with 26% of white employees. Historically, Black and Asian employees have reported considering quitting at rates just under 30%, consistent with the general workforce.

You sperate a man from the dignity of work and you wonder why he doesn’t work.

Then make a run for the border (immigration reform including labor arbitrage and democratic gerrymandering incentives) and earn a half million greenbacks in secular incentives. It ‘s a Pro-Choice, Pro-Choice, Pro-Choice, Pro-Choice, selective (“ethical”), opportunistic (politically congruent), quasi-legal (“penumbras and emanations”) religion. It is no wonder that people lose their faith and are skeptical. Allegations of diversity [dogma] (e.g. racism), inequity, and exclusion only serve to exacerbate the problem.

Secular disincentives for personal responsibility. Conflation of immunity and vaccination, personal protection that does not contribute to community immunity, and denial of “vaccine”-induced adverse events, especially in children and young adults. Masks that offer viable legal indemnity and shared responsibility. A diversity of Pro-Choice religious tenets. Without a life under consideration, should it be her and his choice? Why are they, notably abortionists, anti-choice? The cognitive dissonance is deafening.

Let’s talk about the real reason: too many incentives NOT to work

Quite a few state unemployment agencies officially classify people fired for being unvaxed as voluntarily quitting, therefore ineligible for unemployment benefits. It also hides the true extent to which company vax mandates are self-inflicted wounds.

My brother, who is quite a bit of a lefty, still makes sense when he said the following: a lot of people are now finding other employers that treat them with dignity. A case in point is it people. For years, they’ve been paid a 40 hour week, but have answered that ringing phone at 2:00 in the morning to come in instantly to resolve a problem period they do so, but barely gets so much as a thank you. They have finally figured out they don’t need to take that nonsense anymore. Same thing with the vaccination mandates.

From anecdotal evidence, I believe this has a lot to do with the housing crisis created by zoning laws, construction unions, and eviction restrictions; as well as restrictions on concrete plants, lumberjacking, and import tariffs on steel. Housing is more expensive than ever, and if people can’t afford housing with their job, then they don’t see much point in working. May as well live off welfare and move to the boonies where you’ll live more comfortably than trying to work in a city or large town.