All eyes are on Virginia. 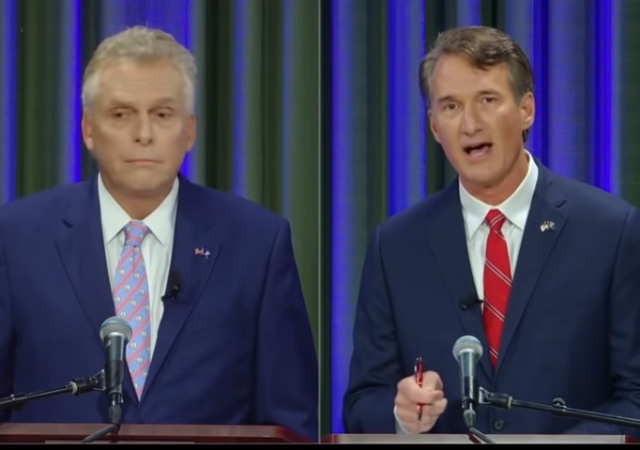 The polls close in Virginia at 7 PM ET. Will the next Virginia governor be pro-education, pro-parent Glenn Youngkin? Or will pro-Critical Race Theory Terry McAuliffe get another term as Virginia governor?

AND NOW, MY PREDICTION FOR FINAL VA VOTE

I made this a few days ago (several people who I DM can verify, since I don't do revisionist history)

Will it be an early night?

Steal or no steal. That is the question.

Faux (FOX) finally calls it for Youngkin.
I suspect this means Fox has been told the left cannot cheat enough to steal this one.

I’ll bet they tried though.

It will be stolen I have no doubt unfortunately

Thank you for posting this!

They have to steal it, it’s considered a bellweather and they can’t have that.

Virginians have no use for McAuliffe, I see Youngkin as a fresh change for all in a Commonwealth that has been horribly ill served by both McAuliffe and then DOKTOR Ralph da CoonMan.

As it were, Virginia should probably spinoff “Northern” Virginia and let them fend for themselves as a tiny enclave and separate state. They could call themselves TrafficHell or GubmntAcres or maybe Hatesylvania.

Whatever the outcome, Northram will be gone. We take our blessings as we find them.

I hope they’ve got good intel on Fairfax.

Happy! So happy!! I voted straight GOP ticket today. Feel free to give me a virtual hug in celebration. (I’m a very happy lady so go ahead).

Maybe there is hope after all for this country

But keep in mind that the only thing you can think for that is that the Democrats have never learned how to boil a frog properly. They win, they go crazy, they get crushed.

Is there any website I could go to to look for the results in particular races of interest to me? Watching this Twitter feed for the name of a particular candidate who never goes by is becoming unrewarding.

True. Although, this wouldn’t be a problem if the (R) party didn’t suck and actually did things with their victories!

Once again, at the sake of being repetitive (to borrow a line from Biden), the counterculture is upon us. Progressive hysteria will continue, but will be increasingly tuned out. It will be like a roller coaster for awhile, but the ship has turned!

It better not be close, Per the official Virginia state vote tally website that Ace linked: “Absentee ballots may be accepted until noon on November 5th. Therefore, results are incomplete.” They’re supposed to be postmarked by election day, but we know better. If Youngkin doesn’t win by 50,000 votes, he’ll lose with absentee ballots flooding in without postmarks, and a judge will rule they must be counted.

The shocker is NJ, where Ciattarelli is leading Murphy by half a percent with 40% in. The closest poll had Murphy winning by 4 points. He will probably still win, but NJ is a really blue state.

Ok that was autocorrect
Youngkin’s lead down to 4%

Down to less than 3%

So Terry isn’t conceding yet. If this was reverse he’d be telling Youngkin to give it up.

The steal is in full swing

12:07 AM Easter
Fox News refuses to call it for Youngkin

I absolutely hate him too. He was also dissing President Trump amd trying to make Youngkin the front runner for 2024…
Nuts

Nobody has explained how the 97% precincts reporting figure changed to 94%. It just changed on all websites with no explanation.

Actually, while the left cheats massively, those numbers are just estimates based on prior elections and expectations of voting numbers. They are subject to change.

I believe the change from 97% to 94% was due to adjustment for the to-be-counted mail-in ballots. If there are games being played here – it will be with the mail-ins.

Why in Blue states does it take longer to count votes than other states especially when we live in the age digital everything?l

I’m sure you know the answer.

I do know the answer. It was my (poor) attempt of trying to be sarcastic.

The new Virginia Lieutenant Governor is one of the most impressive Americans I have ever listened to.

Vote counting is a straight up addition problem and should follow mathematical rules, yet it turns into a subtraction and one sided massive dump without a vote ( almost always in favor of Democrat) and it turns into a farce not to ne trusted with your eyes.

And voting should only be done on the day! No mail in ballots means no (or less) fraud.

Not totally unexpected. A lot of speculation over in my neck of the woods is that the Dems are very, very short on resources for any cheating, and are trying to save what they can for the midterms.

They might’ve been able to cheat their way out if Loudoun County hadn’t blown up, and McAuliffe hadn’t opened his stupid vampire piehole and talked about how parents should have no say in their kids’ education. Idiots.

The real surprise, for me, is New Jersey. Even in Murphy wins that is WAY closer than I suspect the Dems care for.