Kyle Rittenhouse: “It was the Right to Self-Defense on Trial”

Kyle Rittenhouse: “It was the Right to Self-Defense on Trial” 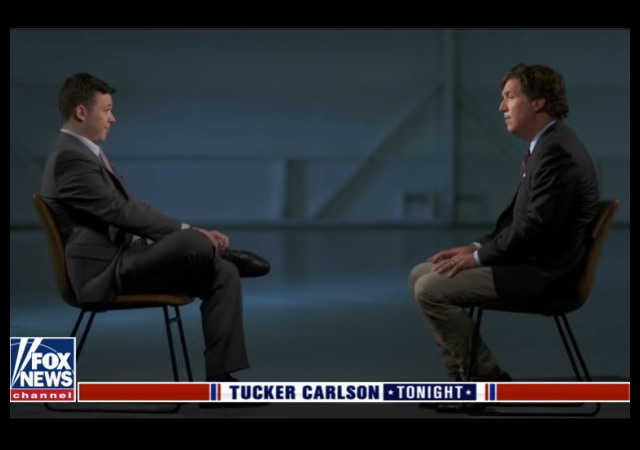 In his first media appearance since being found not guilty, Kyle Rittenhouse sat for an interview with Tucker Carlson of FOX News.

It is fascinating to hear him speak plainly about the fateful night and the trial, without the constraints of the courtroom.

In an exclusive interview with Fox News’ Tucker Carlson, Kyle Rittenhouse spoke out about the night of the Kenosha riots that led to his arrest, as well as his eventual acquittal by jury and the angry reaction of the mainstream media and Democrats including President Biden.

Rittenhouse, 18, was acquitted in the shooting deaths of two men, Anthony Huber and Joseph Rosenbaum, as well as the wounding of Gaige Grosskreutz, whom he shot through the right bicep after the protester pointed a pistol at him.

Rittenhouse told Carlson that he was staying at the home of a friend during the Kenosha riots and was mystified and troubled by the lack of resources provided to the police force in trying to quell the violence after the shooting of Jacob Blake.

“I’m not really sure where [the police presence] was, because they had a hard job for sure – but I didn’t really think they got the support they needed,” he said.

“The governor, Tony Evers, failed the community and there should have been a lot more resources to help with that.”

Tucker Carlson asks Kyle if he plans on holding the media accountable for their lies:

"I have really good lawyers taking care of that right now. I'm hoping one day there will be accountability" pic.twitter.com/vmjgmTBAGm

Kyle Rittenhouse on the media lies about him:

"The lies that they can just get away with spreading. It's just sickening and it's a disgrace to this country" pic.twitter.com/QKmAQFLTEK

Rittenhouse summed up the trial this way:

“It was the right to self-defense on trial. If I was convicted, no one would ever be privileged to defend their life against attackers,” he said. “Apparently to many people on the left, it is criminal to protect your community.”

In what seemed to be a response to the media, Rittenhouse said that the case had nothing to do with race:

Kyle Rittenhouse: "This case has nothing to do with race."

This is the moment when he talked about what the trial was really about:

"It wasn't Kyle Rittenhouse on trial in Wisconsin. It was the right to self-defense on trial."

Kyle Rittenhouse tells Tucker Carlson that Lin Wood and John Pierce could have bailed him out of jail in September but kept him in there until November to "raise money so they can take it for their own benefit. Not trying to set me free." pic.twitter.com/wejY86igiY

Here's the part that came after I accidentally cut off:

Kyle says he could have been bailed out in mid-September but Lin Wood and John Pierce kept him in jail until November. pic.twitter.com/wxMZnPvDgg

In the next few days, we will probably see criticism from the media over this interview, but it’s important to remember that all journalists would have given their right arm to get this sit down.

This Kyle Rittenhouse interview is the biggest get in television. And the subject did not choose to speak with any of the corrupt corporate media outlets (who lied constantly about him). He went with Tucker. Biggest name in TV journalism.

The young man has a level head on his shoulders. He showed a level of restraint on the night of the shooting that I don’t know if I could duplicate.

Tucker is probably one of the (very!) few big names in media Kyle could have gone to and not be attacked or smeared, asked deliberately leading questions to make him look bad. I’m glad he’s able to get his side of the story out there to a large audience.

TC showed what a proper interview looks like…juxtaposing truth and fact from the lies the MSM spewed. Yet, it is interesting how many people embrace the lie, preferring willful ignorance and trusting propaganda.

KR (when TC asked him how he could stay so calm): “I’m generally a calm person…but I’m freaking out inside.”

His calm is what kept him alive that night. Gotta love this young man.

Agree. I’d like to see him run for office or be positive change in some way, shape, or form.

Exactly. The sanctity of life is lost on the Left, which ruins everything it touches, seemingly on purpose.

The ability to keep your head about you and think things through during a chaotic life or death event like what KR went through is something that most people only get after a significant amount of training combined with years of real world experience.

To stay outwardly calm while “freaking out inside” at 17 years old is a rare and valuable trait. A trait that could serve him well in his future endeavors.

Spot on, his calm reminds me of Robert Service poem “If”. A prime example of cool under fire.

I can’t belt how mature and well spoken he is. A hard working kid from the heartland, not a spoiled brat, helping his family out as cook, janitor and life guard, in Kenosha by the way.
I imagine Az state will not honor his admission
He will have a hard road thanks to thugs but he’s will not only survive Bit thriveGod bless Kyle
He was a man when men were cowards

Self defense is on trial every day in this country. I often wonder how many people are behind bars because of douchebag activist prosecutors like Binger. The mob came after Kyle for sure, but I also wonder if this wasn’t so widely publicized would he have gotten a fair trial.

There was a black father and 16 year old daughter walking around with loaded AR15 rifles in front of the Kenosha court house. They said they were there to “protect” anti-Rittenhouse protesters. I thought guns were for self protection. If they were to see two people fighting and shot one of them, they could not claim self-defense like Kyle did.

He’s not outa the woods yet … might be better that he just keep quiet for now.

How is he not outa the woods? He’s about to sue everyone in the media and Joe Brandon

The article notes the burden of proof is on the prosecution in a criminal case to disprove self-defense beyond a reasonable doubt whereas in a civil case it would be on the plaintiff to disprove self-defense under the lesser civil burden of a preponderance of the evidence. Would be interested in comments on use of the legal doctrines of res judicata and or collateral estoppel in any follow-on civil action. Normally, when the prosecution loses a case it has failed to establish all elements beyond a reasonable doubt and I believe this precludes a civil action because principles of res judicata / collateral estoppel would preclude re-litigation of the issue which has already been decided under a higher burden of proof (criminal vs. civil). Because of the shifting burdens of proof applicable to assertion of self-defense (they are reversed), it might be argued that a follow-on civil case presents an issue akin to double jeopardy (but for the failure of proof at the criminal trial). It does seem, however, it would present serious and perhaps insurmountable obstacles to prosecution of a civil case.

This young man is going to give Sandman a run for CNN’s money! 🙂