“They’re expressing language people just don’t use and there’s a backlash and a frustration at that. Suburbanites in northern Virginia [and] New Jersey, you know, pulled away a little bit.” 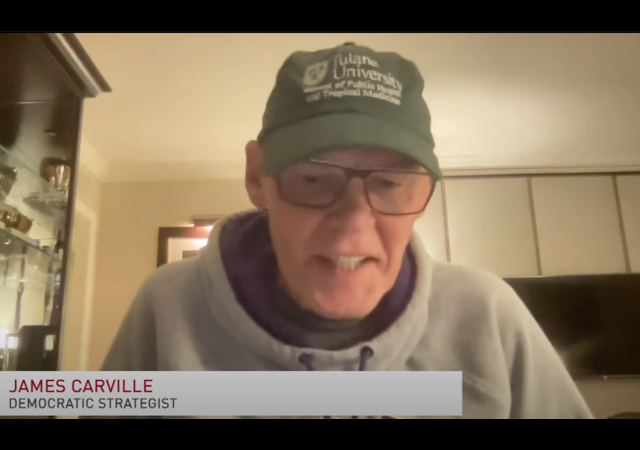 Veteran Democratic strategist James Carville tore apart the “wokeness” embraced by the Democrats because it’s not how regular people think or talk.

“What went wrong was this stupid wokeness,” said Carville. “Don’t just look at Virginia and New Jersey. Look at Long Island, look at Buffalo, look at Minneapolis, even look at Seattle, Washington. I mean, this defund the police lunacy, this ‘take Abraham Lincoln’s name off schools, people see that.”

Carville said the woke left has had a “suppressive effect” for Democrats in races across the country.

“Some of these people need to go to a woke detox center or something,” he continued. “They’re expressing language people just don’t use and there’s a backlash and a frustration at that. Suburbanites in northern Virginia [and] New Jersey, you know, pulled away a little bit. Youngkin never ran any ads against Biden.”

He said Youngkin “just let the Democrats pull the pin and watch the grenade go off on them. And we’ve got to change this and not be about changing dictionaries, and change laws. And these faculty lounge people that sit around mulling about I don’t know what, they’re not working. Look what happened in Buffalo, again, Seattle, I think the Republicans may have won a city attorney’s race in Seattle, the autonomous zone. Who could even think of something that stupid?”

He would be the first patient

Carville is an accessory before the fact, during the fact and after the fact.

Well, McAuliffe certainly helped nationalize it even more than it was last month with his comments about parents and schools. I know yesterday the excuses were flying that what he said had been twisted out of context so naughty, naughty, Glenn Youngkin for being deceptive. Cry me a river.

He is 100% right, however the ‘wokesters’ will double down because that is what Trotskyites do.

Right. Carville may be right, but he’s a boomer. The kids will just ignore him, because they are the future of the party. Future losers, but the future all the same.

Carville and Grahamnesty should start their own party.

Their first hires can be Bill Krystol, and Steve Schmit, and their pedophile buddies.

Well, I have news for Mr. Carville.
That’s what the Democrat party is, and they are going full steam.
Maybe he should consider jumping off of that train.

Carville was a pit bull in his own way, but a true believer, not a mercenary.
He has nowhere to jump. The other side certainly doesn’t want him.

Follow Carville’s money: you’l find he’s nothing but a whore.

A woke vaccine and a TDS vaccine. Someone would make a lot of money and be doing a public service.

I have a feeling James Carville is going to find himself cancelled as soon as the next generation takes over on the Left.

They already have taken over!

McAuliffe said the quiet part out loud, because he thought it was safe to do so. They will continue with the policies, just won’t say it anymore.

He said the quiet part out loud because evidently he is not the sharpest knife in the cutlery drawer. They will continue with the policies, just won’t let McAuliffe out in public anymore.

Did anyone accuse Carville of being racist yet?

It should be a given. He’s from Georgia.

James Carville is the oldest of eight children. He was born on October 25, 1944, at the U.S. Army hospital at Fort Benning, Georgia where his father was stationed during World War II.

With his father deployed, his mother, Lucille stayed behind in Carville, Louisiana, where James was raised. At the end of her pregnancy she went to Ft. Benning long enough to have her firstborn son, James.

Carville later quipped, “We were availing ourselves to free government health services.”

The Mensheviks push back against the Bolsheviks. We know which are more ruthless.

My money is on Rear Admiral Rachel Levine. She/Her/X is the only non-elected public official to receive federal promotions and rise faster than ever thought possible.

And now She is the Ruler of the Queens Navy!

Therapy should be the first stop.

“Are the triggers in the room right now?”

“What went wrong was this stupid wokeness,”

Just need to polish it up a little. Use different words. Do a better job of fooling people. Be less transparent about it.

It is truly amazing that the “snakeman”, the original Clinton hatchet man is now considered a moderate democrat…he was and is the ultimate left wing sycophant.
Watch them go after him for not being a loyal socialist, er…progressive. Couldn’t happen to a nicer guy!

The Democrat and Republican parties are gone. The only party that matters now is the PRO AMERICA PARTY. The world is changing and the former parties have not addressed the “changes”. Do you still want a Constitutional Republic? THE PATRIOT PARTY has a nice ring to it.

Terry is scum, no matter how much Gollum swears otherwise.

Carville’s comments are revealing but the radical base of the Democrats is calling the shots in the House, Senate, Big Media and Big Tech

The radical base would rather be ideologically pure than engage in negotiations over what legislation, is possible, if at all, to get through Congress, and would rather lose elections than appeal to anyone beyond their base

Ole Serpenthead needs to just wander off into the swamp, never to be heard from again. This Clinton operative has zero redeeming qualities.